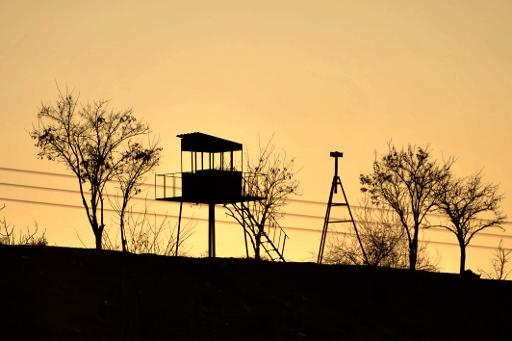 AFP – Syrian rebels seized the Kasab village and border crossing with Turkey Monday, an NGO said, as the regime launched fresh air strikes in a bid to halt the opposition advance.

The air raids come a day after a Syrian warplane was shot down by Ankara’s jets in an incident slammed as “flagrant aggression” by Damascus.

The Syrian Observatory for Human Rights said the rebels and their jihadist ally Al-Nusra Front were now in full control of Kasab, the only border crossing with Turkey in sensitive Latakia province, President Bashar Al-Assad’s heartland.

The crossing was the last functioning border post with Turkey to slip from regime control.

“The rebel fighters are in control of Kasab’s main square. There is fighting on the edges of Kasab, but the rebels are in control of the village” and border crossing, Observatory director Rami Abdel Rahman told AFP, four days into a rebel offensive.

According to a security source in Damascus, however, the village has not fallen.

“The situation is unclear, the fighting continues, and neither side is in control of the village,” the source said.

The battle for Kasab, launched by rebels and Al-Nusra Front on Friday, killed at least 130 regime and opposition fighters on Saturday and Sunday alone, said the Observatory.

The rebel advance came despite Syria’s air force carrying out strikes and dropping barrel bombs Monday on their positions in the Kasab area and in nearby Jabal Turkman, said the Observatory.

Turkey on Sunday downed a Syrian warplane in what the Assad regime described as a “flagrant act of aggression”.

In a statement, the Turkish military said the plane breached its airspace by around one kilometre and flew over Turkey for another 1.5 kilometres.

It was the most serious incident involving Ankara and Damascus since Turkish warplanes last September downed a Syrian helicopter it said was two kilometres (a mile) inside its airspace.

Turkey, which backs the uprising against Assad and hosts more than 750,000 Syrian refugees, warned Damascus against testing its determination and pledged a tough response if Syrian warplanes violate its airspace again.

This is not the first time fighting has broken out in Latakia province, but rebel advances have generally been short-lived.

Speaking to AFP by phone from Latakia, an activist said the Turkish army’s downing of the plane had boosted the rebels’ offensive.

“It means that, unlike previous battles, the rebels’ backs are covered this time,” said Omar al-Jeblawi.

“The regime is very angry,” he added. “They are using all their force – army and paramilitary – to try to stop the rebels, who in turn are trying to advance towards the sea.”

Syrian state news agency SANA meanwhile said Hilal Al-Assad, a relative of the president and commander of a pro-regime militia, had been killed in the fighting, along with seven of his men.

Most of Kasab’s majority Armenian residents have fled the village due to the fighting and air attacks, Abdel Rahman told AFP.

Kasab is the last remaining Armenian village in the Middle East, according to Syria expert Fabrice Balanche.

Hundreds of thousands of Armenians were killed between 1915 and 1917 as the Ottoman Empire, the predecessor of modern Turkey, was falling apart.

After three years of civil war, Syria’s government now controls only nine of the 19 official land border crossings with its neighbours Lebanon, Jordan, Iraq and Turkey.

Only one crossing into Turkey remains in government hands, but it is closed on the Turkish side.

More than 146,000 people have been killed in the conflict, and nearly half the population displaced.