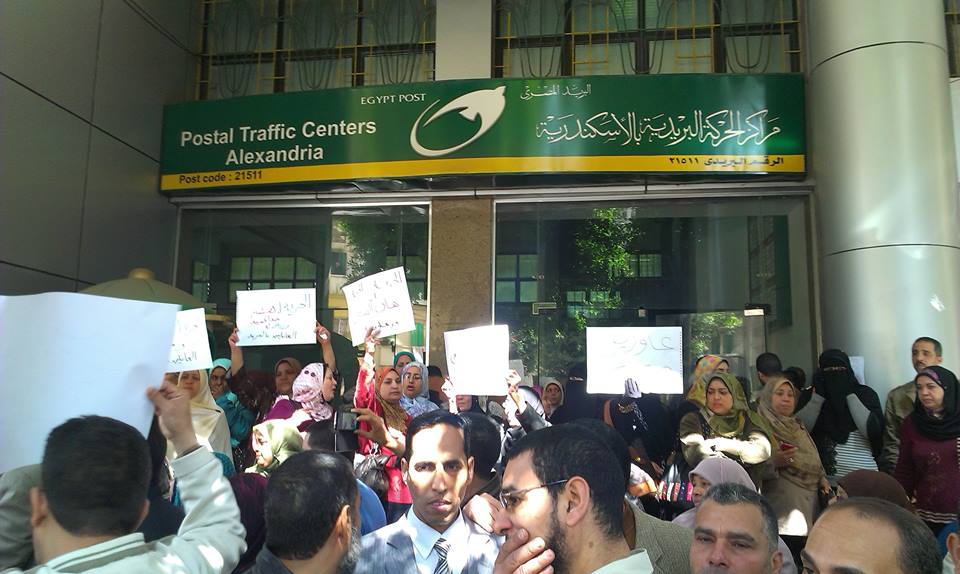 “I joined the protests on 30 June, but now I am not sure if it was the right decision, now we are facing the old [pre 25 January] regime,” Zeinab Ali, secretary general of the Independent Union of Postal Authority. “We are willing to pay our lives for the sake of a decent living.”

Ali insisted that the striking workers and union leaders “are not politicised or affiliated with the Muslim Brotherhood, nor what the media calls ‘the fifth column’.”

The Independent Union leader added that the arrests would only increase the workers’ determination and lead to further escalation.

The Egyptian Center for Economic and Social Rights reported that a number of Postal Authority workers in Alexandria had gathered in front of the Misr Train Station postal distribution point demanding the release of their fellow workers. The protesting workers were joined by the families of the detainees.

According to the interior ministry media office, a complaint was filed by Mohamed Hamed claiming that 11 workers were blocking the flow of distribution and money at the central distribution point in Alexandria, along with a number of complaints by citizens that they had not received their pensions due to the strike. A force arrested 5 of the 11 strike organisers according to an order from the prosecution.

On Tuesday five Postal Authority workers and board members of the Independent Union in Alexandria were arrested from their homes at 1am. The detained workers are: Haitham Othman, Ayman Hanafy, Hany Al-Sabagh, Gaber Ismael, and Hisham AbdelHamid.

According to Ali, the Postal Authority strike “reached 70%” of Egypt’s 52,000 postal workers on Sunday, calling for pay raises and a change in leadership.