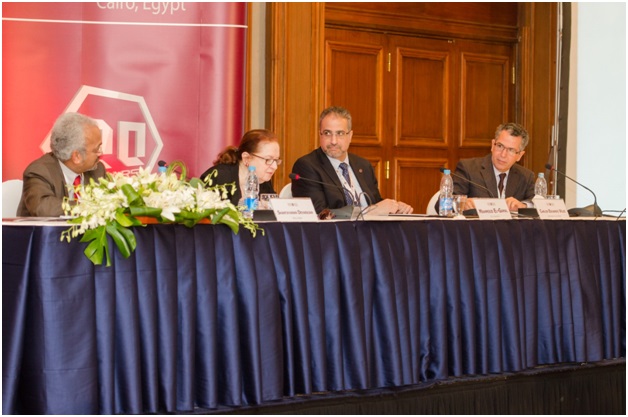 On the second day of the 20th Annual Conference of the Economic Research Forum, experts gathered for a look at various experiences in achieving social justice from around the globe.

Shantayanan Devarajan of the World Bank started off the session by saying that despite the fact that constitutions have established the right to basic services such as education, health and water to protect the poor, but it is the richest who benefit the most from these services. In Mali, for example, despite universal access to primary education, the rich are the ones finishing their schooling while the poor drop out.

Presenting case studies in Africa and Mali, he said providing such universal services is stretching the limited resources these governments have.  “Governments are financing private goods that are worth a lot, even for the rich, so they will grab these services and the poor will be left out,” he said, adding that the people meant to be protected are the ones that are the ones losing out. “If you can have the poor pay, they will get better service.”

University education is another example of this, he said, since the rich are the only ones financially able to benefit from it.

In trying to implement social justice, the system of public services is seized upon by the non-poor at the expense of the poor, and any attempt at changing this will be faced by resistance from those trying to keep rents stable, Devarajan said. Instead of universal subsidies, he suggested, governments should provide small but universal cash transfers, instead of forcing the poor to consume goods they cannot access.

Looking at the other side of the globe, Carlos Vélez (of Universidad de Los Andes, Colombia) recounted the story of inequality in Latin America. Despite higher rates of inequality compared to the rest of the world, he noted that the period between 2002 and 2010 has seen a significant improvement on this front in the region. In his opinion, the key factors driving inequality are factors pertaining to the distribution of human capital such as education and policies such as transfers, pensions, subsidies and taxes that benefit the rich more than the poor.

In his presentation, Vélez showed that Latin Americans continue to perceive high levels of inequality and remain uncomfortable with policies they see as unfair. Nonetheless, examining data from the Human Opportunity Index, Vélez gave reasons for public optimism, particularly highlighting that Latin American countries are mostly performing well in education, social security and basic housing. Most importantly, he said, are the signs of improvement in equality of opportunity for children. “Latin Americans are more optimistic about their children’s future.”

Mahmoud El-Gamal of Rice University then spoke to participants about concepts of social justice from classical economics and Islamic thought.  El-Gamal proposed that the majority of Muslims view Islam as favouring redistribution as a form of social justice, saying that “if the core theme in Christianity is love, in Islam it is justice”. He added that this was not simply a call for greater income inequality, but rather that the very rich should contribute more and the state should play a greater role in redistribution and provision of public goods.

El-Gamal asserted that the recent uprisings in the Arab world were not initiated by the poor in those countries, but were in fact started by a disaffected middle class whose income levels has not fared well in the last two decades. In Egypt, he said, the middle classes had been losing everything they had gained and were regressing to levels of wealth their grandparents experienced before the 1952 revolution. With more wealth being accumulated through control by the elite, the seeds were sown for widespread social unrest fuelled by anger from the middle class.

On the third and final day of the 20th Annual Conference of the Economic Research Forum, a group of distinguished experts assessed the extent to which past policies in the Arab countries in transition succeeded in achieving social justice and what are the lessons learnt.

Gouda Abdel-Khalek of Cairo University kicked off the conference saying that building foundations for social justice in times of political turbulence is a tricky task. Speaking about Egypt he said that very little has been done to address the slogan demands of the revolution: “Bread, Freedom and Social Justice”, and that the same problems which existed before the revolution still persist.  These include the falling wage share to GDP, rising unemployment with youth unemployment over 30%, rising poverty levels, an increasing urban/rural divide and a lack of social mobility. Abdel Khalek pointed out that the steady increase in wage related protests before and after 2011 reveals the link between social unrest and the poorly performing Egyptian economy. The factors behind the rising social injustice, according to Abdel Kahlek, were mainly economic policies that were about “growth now, redistribution later”, as well as corruption and rising inflation.

To achieve social justice, Abdel-Khalek underlined the need for widespread reforms including subsidising agricultural producers, increasing taxes on speculative dealing, and creating a progressive taxation system. Urban bias was also highlighted as a particular problem. He also recommended that Upper Egypt be treated as a special region by policymakers due to its serious levels of underdevelopment and poverty.

The second speaker, Georges Corm of the Georges Corm Consulting Office, posed a question: why  has the Arab World has fallen behind emerging markets like Brazil, Malaysia and Korea? In answering this, he stressed that countries cannot be competitive or highly innovative without mobilising their human capital. Drawing on the experience of Japan, Corm said that the Asian nation’s success is attributable to its focus on preparing its rural workforce to transition towards urbanisation and become efficient workers in industry, while conglomerates provided total social protection for their employees and their families. Governments that fail to take care of the largest part of society, a section with no stake in the rewards of modernity and industrialisation, will not survive, he added.

Corm said that tackling illiteracy should be a priority given that 20% of the Arab population is illiterate, most of which rural and women.  International agencies, he said, should make literacy a prerequisite for donor funding. Corm also asserted that poor development models represent the overarching cause of poverty, saying: “The first two waves of Arab revolution were about this bad development model and, essentially, we cannot carry on like this.”

Paul Salem of the Middle East Institute, also speaking at the final session, said that in theory, a transition to democracy should improve social justice, but such a result is uncertain since democracy can easily be commandeered and diverted to serve narrow interests. It can even be offered as a substitute or compromise for an absence social justice, he said, adding that “democracy’s link to social justice is problematic and should not be assumed”.

Salem believes that the Arab Spring uprisings had no vision of a new social contract. This absence of a clear message is even visible amongst thinkers, with no public intellectuals being associated with the vision of the uprising. Overall, Salem concluded that the social justice picture across MENA does not appear promising, with a long road before the Arab transitions begin to achieve stability and growth. In some cases social justice been overtaken by sectarian issues. A lack of political leadership combined with economic and social vision, he argued, marked the current climate in MENA as very different from the revolutions of the 1950s. Without a new social contract, it is unlikely policy makers will be able to offer the necessary solutions.

The final speaker, Zafris Tzannatos of Silatech, asserted that “bad politics leads to bad economics”. He argued that, regionally, job creation had not been a priority and accused leaders of being both insincere and ineffective in striving for this as a means to social justice.

Many speakers suggested that Economic Research Forum should play a leading role in generating robust evidence and using it in concert with others to inform and frame the debates that are necessary to lead to alternative development models for the region.