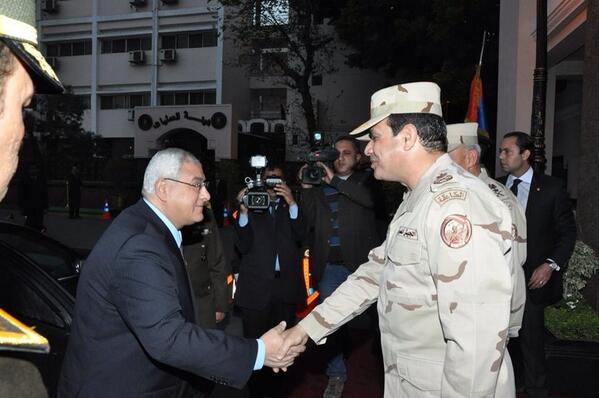 Abdel Fattah Al-Sisi resigned from his position as head of Egypt’s armed forces and defence minister Wednesday, to embark on a presidential campaign.

The announcement came following a meeting between Al-Sisi, the Supreme Council of the Armed Forces and interim President Adly Mansour, who flew back from Kuwait City to attend the meeting.

Al-Sisi was defence minister under former President Mohamed Morsi and during the interim government following Morsi’s ouster in July 2013.

The 2014 constitution bars any military personnel from entering the presidential race. Al-Sisi has previously said he “cannot ignore the will of the people”, enjoying much support for a presidential bid. He is yet to officially announce his intention to run for president.

Hamdeen Sabahy, head of the Al-Tayar Al-Sha’aby movement, is the only person who has confirmed his intention to run for president.

Ahead of the announcement, various different parties expressed their desire to see Al-Sisi become Egypt’s seventh president. The Supreme Council of the Armed Forces endorsed Al-Sisi to run for president in January and Russian President Vladimir Putin said in February that he knew Al-Sisi intended to run for president and wished him luck.

Al-Sisi was promoted to Field Marshal in January by interim President Adly Mansour.

The 6 April Youth Movement recently announced its opposition to Al-Sisi’s candidacy, arguing that it would only serve to deepen divisions in Egypt.

The Muslim Brotherhood and its affiliates in Egypt are vehemently opposed to Al-Sisi becoming president, as it is their view that Morsi is still Egypt’s legitimate president. Al-Sisi made the announcement in July that an interim president and cabinet would be appointed to replace Morsi and his government.