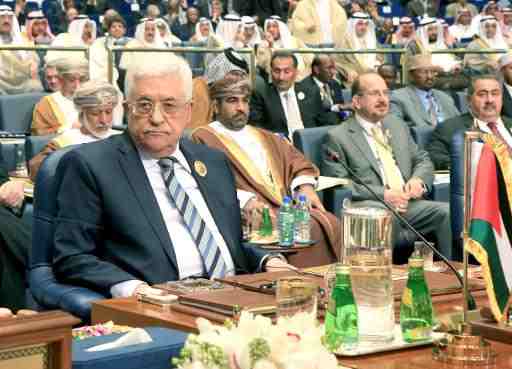 “We hold Israel fully responsible for the faltering peace process,” announced the Arab League on Wednesday at the conclusion of its 25th summit. “We refuse to recognise Israel as a Jewish state,” the statement issued by the assembly added.
“We emphasise that the Palestinian issue remains the central issue for the people of our [Arab] nation and devote all efforts to establish an independent Palestinian state with its capital in East Jerusalem and the June 1967 borders,” added the Arab League, saying it would work towards a two-state solution that would achieve “just and comprehensive peace”.
The league also called on the removal of all Israeli settlements in the framework of reconciliation between Israel and Palestine.
The Arab League said it “supported the demands of the Syrian people” and called on the Syrian regime to cease using violence against its citizens, commending material support to the victims of the violent conflict.
History will record the stances of states that stood by Egypt after 30 June, said interim President Adly Mansour on Tuesday evening.
During his address to at the 25th Arab League Summit, the Egyptian interim president called on countries who “still stand on the wrong side of the course of history” to review their positions.
Mansour, who thanked fellow Arab states for supporting Egypt “during one of the most dangerous societal stages fought by Egypt in its modern history”, said the country was in the process of “building modern state institutions” by ratifying the constitution in January and preparing for upcoming presidential and parliamentary elections.
The Egyptian president also focused on regional issues. “The Palestinian cause has been at the forefront of the challenges,” said Mansour, reiterating his country’s support for Mahmoud Abbas and the Palestinian Authority in the United States-sponsored negotiations with Israel. He went on to call the Israeli occupation “a disgrace to all humanity”, emphasising the importance of ending the occupation and “enabling the Palestinian people to establish their own viable state” with East Jerusalem as its capital and 1967 borders.
The Egyptian president also called on the international community to act to stop attempts by Israel to harm holy sites in Jerusalem, including Al-Aqsa Mosque, which Mansour called a “red line”. He added that Israel “bears full responsibility” as an occupying power over the “dire consequences” that would arise if Al-Aqsa Mosque was affected in any way.
Mansour also strongly condemned the “Israeli aggression on the Gaza Strip”, urging human rights advocates to “do their part in alleviating the suffering of the Palestinian people in dear Gaza,” adding that Israel fulfill its responsibilities to the people of Gaza.
The president also said he “strongly supported all international efforts” to end the crisis in Syria, adding that Egypt would also make efforts to bridge various opposition forces around a common vision. “A political solution is the only way out of this tragedy experienced by our brothers in Syria,” said Mansour. “We are very keen to preserve the unity of the Syrian state, its independence, and territorial integrity,” he added.
Mansour also stressed the threat of terrorism, calling on the Arab League to activate the Arab Convention on the Suppression Terrorism and the cooperation detailed in the document, which would include judicial extradition. The Egyptian delegation at the summit had called on Arab Ministers of Justice to meet in Cairo in June to discuss implementing various aspects of the convention.
He also called upon Arab states to adopt a working programme to eradicate illiteracy in the Arab world over the next decade, suggesting that such a programme could be put in place by Arab Ministers of Education as part of a meeting in the next two months.
The president also called on Arab countries to put together a “unified strategy” with intellectual, cultural, and educational elements to confront “extremist ideology, adding that the Library of Alexandria would host regional intellectuals to provide recommendations for such a programme.
“The Middle East must be free of all weapons of mass destruction,” said Mansour. “There is no complacency or apathy about it,” he said.
Minister of Foreign Affairs Nabil Fahmy continued meeting with his Arab counterparts on the sidelines of the summit on Wednesday.
Fahmy met with Saudi Arabian Minister of Foreign Affairs Saud Faisal to discuss regional issues and bilateral cooperation. The two also discussed the initiative to rid the region of nuclear weapons and other weapons of mass destruction.