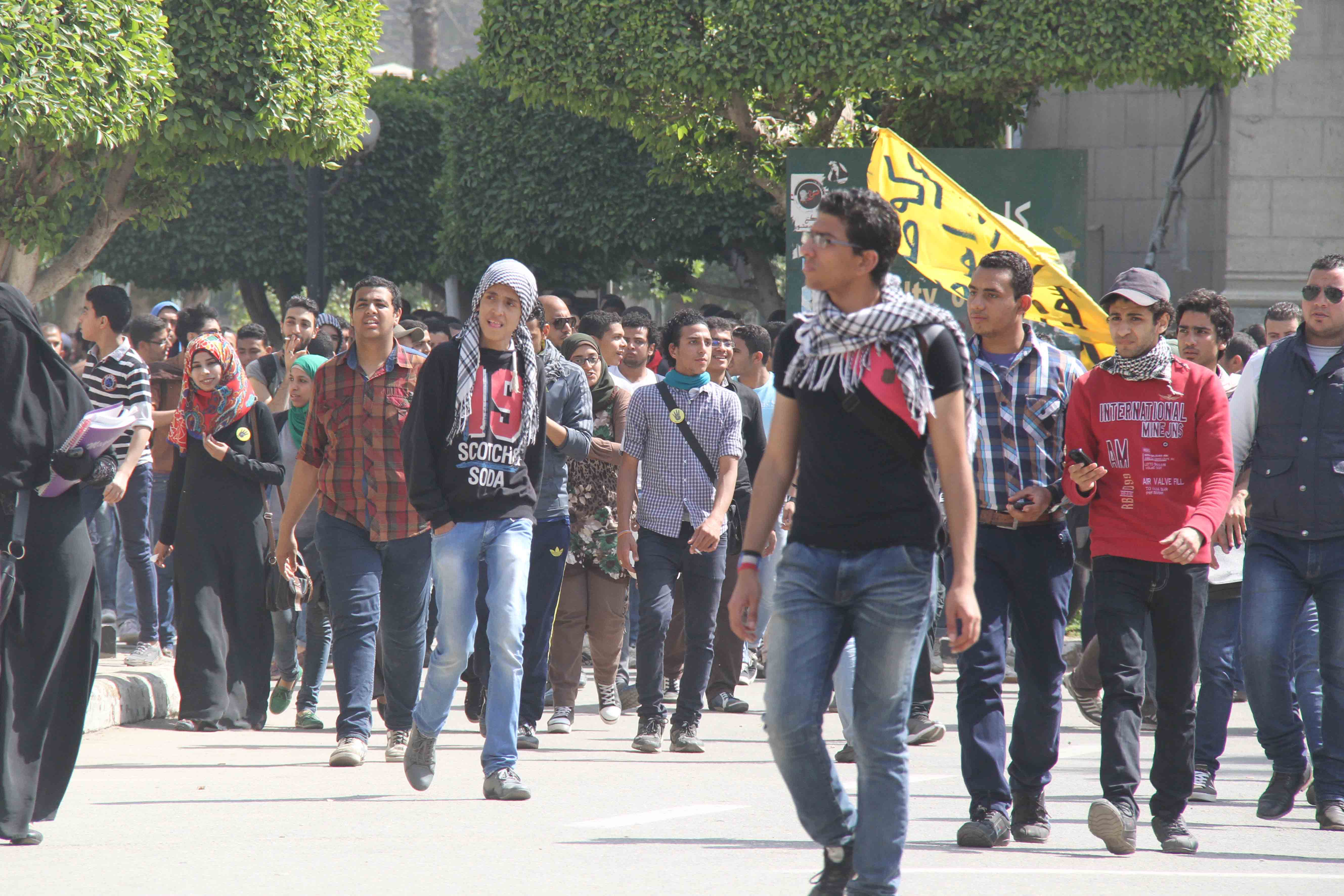 Security forces arrested eight rioters Wednesday at Zagazig University campus after a student-led protest turned violent, according to a Ministry of Interior statement.

Hundreds of students gathered at the universities of Cairo, Al-Azhar, Minya, Zagazig, Tanta, and Mansoura to protest mass death sentences and political detainment. The pro-Morsi group Students Against the Coup organised the demonstrations, which it titled “We will not bow.”
In a statement released Wednesday afternoon, the Ministry of Interior said security forces were authorised by the university chairman to handle the riots, violence and vandalism to public and private property that was taking place on campus by “Muslim Brotherhood students”. Students at Zagazig fought amongst themselves, resulting in 12 injuries, the ministry reported.
At Cairo University, clashes erupted when a rally of hundreds of students from the universities of Cairo and Al-Azhar organised by Students Against the Coup (SAC) reached the Faculty of Applied Arts, which is near the Giza Security Directorate, according to a Cairo University SAC coordinator known as Maria.
Several student sources reported that security forces used tear gas and birdshot to push back the protesters inside Cairo University.
Student activist Ihab Mousa was reportedly arrested. Mousa is the coordinator of an independent group called Faculty of Engineering Revolutionaries at Cairo University, which has organised a number of sit-ins on campus.
Female students from Al-Azhar University led a protest to Rabaa Al Adaweya Square but could not pass the barricades. The students blocked Al-Tayaran Street until clashes erupted with security forces.
Clashes were still ongoing at the time of print.
Ahead of the demonstrations, Students Against the Coup released a statement saying it expected violence. Security was out in force in response to planned demonstrations by the Anti-Coup Alliance Wednesday in Tahrir, Nahda, and Rabaa squares.
The student union of the Faculty of Engineering at Cairo University warned students that it may not be safe to be on campus or near the premises of the university during the protests.
No action has been taken to improve campus safety since two students were injured last week after clashes erupted between security forces and protesters.
The Anti-Coup Alliance had called for Second Revolutionary Wave protests starting on the anniversary of the first referendum on the constitutional amendments on 19 March. The alliance said 350 protests took place on 19 March, during which demonstrators burned the American and Israeli flags, which group leaders say “support the coup”.