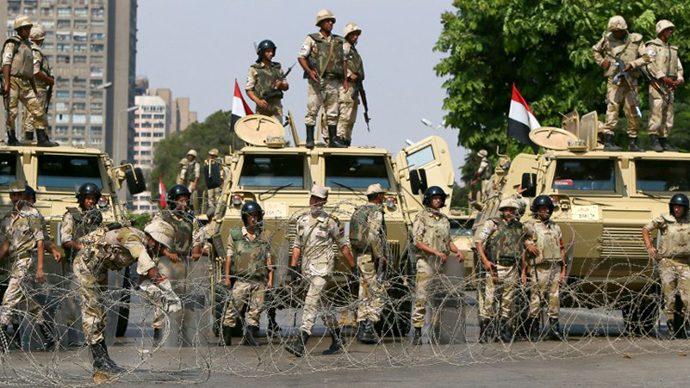 Reuters – Egypt’s army is taking charge of billions of dollars of development aid from the United Arab Emirates, an army official said, raising further doubts over the narrow separation of powers with the military backed administration in place since July.

One of several Gulf states to shower Egypt with cash and petroleum products after the army ousted elected Muslim Brotherhood president Mohamed Morsi, the UAE also looked ahead, seeking to bolster a system that could keep Islamists it sees as an existential threat from running the most populous Arab state.

Alongside money to build clinics, schools and housing units, it offered to fund a project in Egypt’s strategic wheat sector — the construction of 25 wheat silos that could help the world’s biggest importer of the commodity lower its huge food bill.

Bread is a politically-explosive issue in Egypt – failure to deliver it at an affordable price has triggered major riots in the past and the government wants to boost its storage capacity to reduce its reliance on international markets.

When army chief Field Marshal Abdel Fattah Al-Sisi toppled Morsi after large demonstrations against what protesters said was inept government, he put in place an interim civilian cabinet meant to be at arm’s length from the military.

But Major General Taher Abdullah, who heads the Engineering Authority of the Armed Forces, said when UAE officials discussed projects shortly after Morsi’s ouster, it was with the army.

“They said, ‘we will support the Egyptian people but through the army – if the people want a hospital, the armed forces will build it,’” the 58-year-old career officer and engineer told Reuters in an interview.

The army’s role in building construction became public earlier this month when UAE government-linked Dubai firm Arabtec’s announced it had inked a $40bn deal with the military to build one million homes in Egypt.

In the silos project, it has been acting behind the scenes.

The army was not mentioned when a $4.9bn UAE aid package for development and infrastructure schemes was announced in October. It included funds for the new silos, which the government says should help prevent the loss of 1.6m tonnes – around half a billion dollars worth – of wheat a year.

An official at Egypt’s state-run silos and storage company with knowledge of the wheat project told Reuters the interim government’s investment ministry launched a tender in January to choose a company to build four of the silos.

The estimated per-silo construction cost in the tender specifications was nearly three times the cost projected by the UAE, according to the silos company source.

The UAE told the Egyptian ministry to withdraw the tender, making clear that they would not release money until they saw more “suitable” prices in it, the source said.

He said the UAE held a meeting at a Cairo hotel in early March, convening representatives from the three Egyptian ministries and the state silo company along with army officials.

A trader with knowledge of the Egyptian wheat sector also said the UAE had rejected the January tender.

Sherif Oteifa, an adviser to the Investment Minister on “mega projects”, confirmed a tender was issued in January but said it had not been rejected. He said he hoped next week to have final clearance from the Emirates government to award contracts for construction of two of the silos. Officials estimate they will take about 18 months to build.

Oteifa said the army had monitored the tendering process on a weekly basis. “We are happy with this, it makes the process go quicker. But the army will not be involved in construction: the bidders are public and private companies.”

The silos company source said the tender would be run again, along with tenders for the remaining silos. “We agreed that revisions will be made to the tender, and a deadline was set… for the opening of bids again,” the source said.

The trader said he did not have an update on the timing, adding: “They are looking to reorganise the tender and re do it. The Turkish silos are very cheap, they will probably buy those.”

Asked why the army attended the meeting, the silos company source said: “The UAE wants to make sure the money goes to the right place… and thinks the army is the best way to guarantee this.”

Major General Abdullah said meetings between officials from the two governments over the silos were happening on a weekly basis and that army officials attended them.

He dismissed the account of Emirati frustration with the tender process. He did not give details of the latest timetable, but expressed optimism about progress, citing the army’s approach to getting things done:

Egyptian governments now know that unlike in the past, performance is critical. Massive street protests have removed two presidents in three years.

The interim government’s decision to resign in February, with many but not all the same faces reappointed shortly afterwards, has not been fully explained: some analysts see it as a way for the army to distance itself from some of the economic problems that have persisted since Morsi’s ouster.

Sisi, 59, who was appointed defence minister by Morsi and held onto to the post after he ousted Morsi in July, resigned as both army chief and defence minister on Wednesday so he could run for president in an election that is part of a roadmap to return Egypt to civilian rule. He is expected to win easily.

Thousands of Islamist supporters of Morsi have been jailed, hundreds killed and the movement is back underground, where it was before former air force chief and longtime Egyptian ruler Hosni Mubarak was toppled in a popular uprising in 2011.

Under Mubarak, the military gained control of a vast business empire ranging from bottled water companies to petrol stations.

Government spokesman Hani Saleh told Reuters it was logical for it to be involved in the wheat silos project.

“The army is an integral part of this country and is known for its integrity, discipline and past experience in conducting major national projects, especially of this size,” he said.

The supplies minister was not reappointed in the new cabinet. The turnover happened just days after he had sacked several government officials involved in the wheat sector, including the head of the silos and storage company.

Shadi Hamid, fellow at the Brookings Institution’s Saban Center in Washington, noted a contrast between the pace of work by the Egyptian government and that in Gulf nations such as the UAE, the most modernised Arab economy.

“There’s a frustration there because the Egyptian government cannot get basic things done,” he said.

“It’s not something that the Emiratis or Saudis are used to; for them, when they want results they can actually take specific measures to get those results.”

Emirati officials say publicly that they are supporting Egypt’s “march of progress”.

“There was excellent cooperation and commendable efforts on their side,” UAE minister of state Sultan Ahmed Al Jaber said, when asked in a newspaper interview for his assessment of ties between the UAE and the government of interim Prime Minister Hazem El-Beblawi that was in place until last month.

“The Egyptian-Emirati relationship is and will always be strong, and it’s of a strategic nature,” said Jaber, according to a transcript of the interview published on 17 March. The interview also appeared on the UAE’s official WAM news agency.

Jaber is the UAE’s point man on the Egyptian aid projects. Despite the difficulties of doing business in Egypt, there are no signs that the UAE, or Saudi Arabia or Kuwait, will withdraw their support for a pivotal country in the Arab world.

“Even though the Emiratis are frustrated, they’ve signed on for the long term [and] they are on board ideologically,” said Justin Dargin, a Middle East energy expert at the University of Oxford.

It is clear who they see as their partner. When Arabtec announced the housing construction deal, Egyptian papers splashed front page pictures of one of its executives, shaking hands with Sisi.