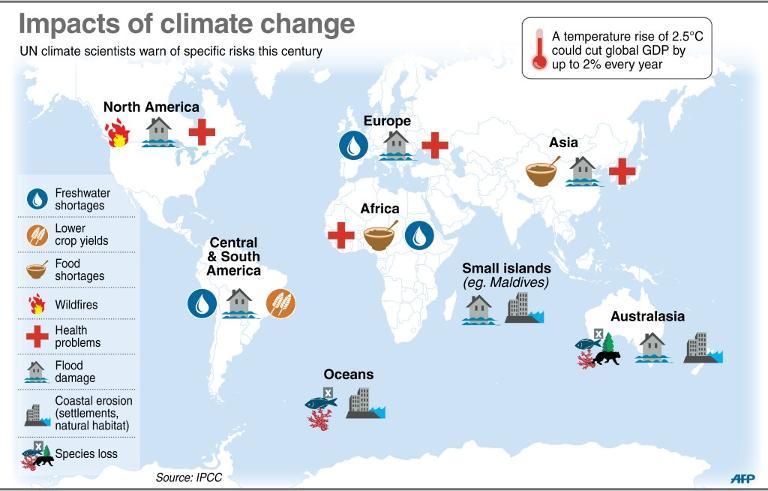 AFP – Soaring carbon emissions will amplify the risk of conflict, hunger, floods and mass migration this century, the UN’s expert panel said Monday in a landmark report on the impact of climate change.

Left unchecked, greenhouse gas emissions may cost trillions of dollars in damage to property and ecosystems, and in bills for shoring up climate defences, it said, adding the impact would increase with every additional degree that temperatures rise.

“Increasing magnitudes of warming increase the likelihood of severe, pervasive, and irreversible impacts,” a summary said, in a stark message to policymakers.

The report is the second chapter of the fifth assessment by the Intergovernmental Panel on Climate Change (IPCC), set up in 1988 to provide neutral, science-based guidance to governments.

The last overview, published in 2007, unleashed a wave of political action that at one point appeared set to forge a worldwide treaty on climate change in Copenhagen in 2009.

But a global consensus failed to emerge as the developing world and developed world squabbled, with big polluters like China insisting it was up to rich countries to take the lead, arguing they could not be expected to sacrifice growth.

And in the United States, President Barack Obama’s attempts at passing climate change legislation have been stymied in Congress, where many Republicans remain unconvinced of the scientific case for warming and argue that mitigation efforts are an unnecessary block on economic growth.

The new document, unveiled in Yokohama after a five-day meeting, gives the starkest warning yet by the IPCC of extreme consequences from climate change, and delves into greater detail than ever before into the impact at regional level.

It builds on previous IPCC forecasts that global temperatures will rise 0.3-4.8 degrees Celsius (0.5-8.6 degrees Fahrenheit) this century, on top of roughly 0.7 Celsius since the Industrial Revolution.

Warming of around two degrees Celsius over pre-industrial times may cost 0.2-2.0% of global annual income, said the new report. UN members have pledged to hammer out a global pact by the end of 2015 to limit warming to 2 C above pre-industrial levels.

The impact amplifies with every degree and beyond 4 C could be disastrous, said the report.

Climate change could drive turbulence and conflict, prompted by migration from newly uninhabitable areas and jockeying for water and food, it said.

“Climate change has a tendency to act as a threat multiplier whatever the current range of stressors is,” said Chris Field, co-chair of the conference.

“There are many things that make people vulnerable, and when you combine a climate shock with these factors, you can have bad outcomes.

“With high levels of warming that result from continued growth in greenhouse gas emissions, risks will be challenging to manage, and even serious, sustained investments in adaptation will face limits.”

Rainfall patterns will be disrupted, resulting in a significantly higher flood risk, especially for Europe and Asia — and magnified drought risks will add to water stress in arid, heavily populated areas, the report said.

This, in turn, will have consequences for agriculture. Yields of staples such as wheat, rice and corn will be squeezed, just as demand will soar because of population growth, it predicts.

The report says climate change will also have a ricochet effect on health, through the spread of mosquito- or water-borne diseases and heatwaves.

Vulnerable plant and animal species, especially in fragile coral reefs and Arctic habitats, could be wiped out.

Adding a further grim layer to the warning, the report said the most vulnerable ecosystems faced a potential “tipping point” that could pitch them into unstoppable decline.

US Secretary of State John Kerry said the document sounded an alarm that could not be ignored.

“Unless we act dramatically and quickly, science tells us our climate and our way of life are literally in jeopardy,” he said. “Denial of the science is malpractice.

“There are those who say we can’t afford to act. But waiting is truly unaffordable. The costs of inaction are catastrophic,” he added.

The report said the danger could be substantially reduced, especially for those alive at the end of the century, if greenhouse gas emissions are cut swiftly.

Even so, countries will have to shore up their defences — for instance, by making water supplies, coastal areas, homes and transport more climate-resilient.

Many of the measures for adapting to climate change are easy and cheap, said the report.

They include reducing water wastage, planting parks to ease heat build-up in cities, and preventing people from settling in places that are exposed to extreme weather events.

The report was hailed by campaign groups as a call to arms for political leaders around the world.

“It’s not just polar bears, coral reefs and the rain forest under threat. It is us,” said KaisaKosonen, senior political adviser for Greenpeace International.

“Climate change’s impact can now be detected everywhere. It’s already hurting us. How bad it will get depends on the choices we will make in the future.

“Governments own this report. Now we expect them to take it home and act on it, speeding up a transition to clean, safe and renewable energy for all.”