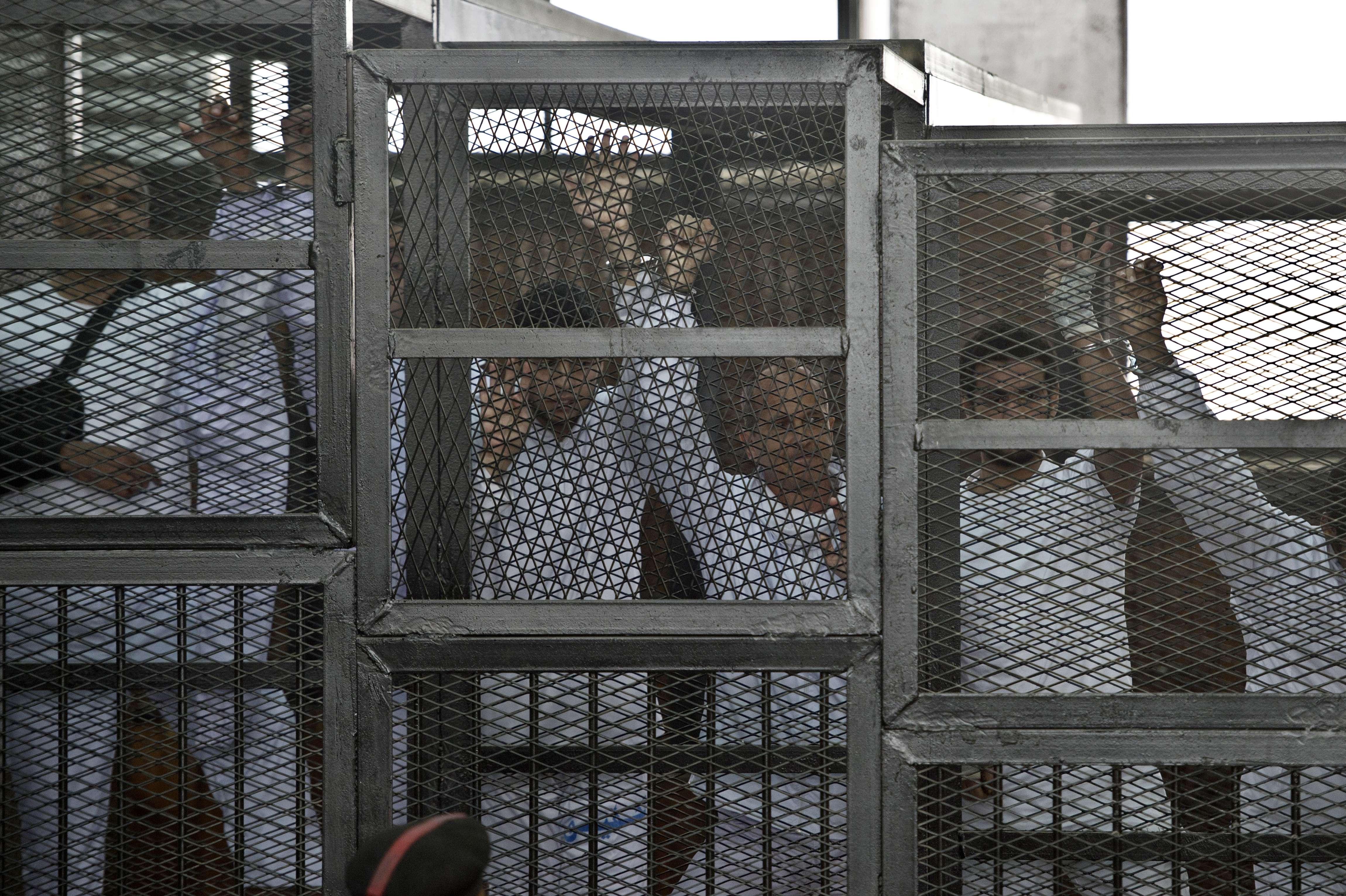 During the court hearing in Tora Prison, the Cairo Criminal Court postponed the case to 10 April, marking the third time the case has been adjourned.

Canadian-Egyptian bureau chief Mohamed Fadel Fahmy, Australian correspondent Peter Greste, and Egyptian producer Baher Mohamed are among 20 defendants on trial for allegedly creating created “a terrorist media network” specialised in producing fabricated video news stories, which they then aired on Al Jazeera and CNN in an effort to tarnish Egypt’s reputation abroad, depicting Egypt as in the midst of a civil war.

In the previous session on 24 March, the court heard testimony from the prosecution’s video expert. When asked specifically about places where Al Jazeera video was edited to falsify events, he told the court to refer to his previous report, according to journalists at the trial. The defendants’ legal team asked for bail at that hearing also, but it was denied.

Of the 20 accused, only 8 of the defendants, including Fahmy, Greste and Mohamed, are currently in custody. The rest are being tried in absentia.

Among the 20 defendants, 16 are Egyptian citizens and 4 are foreigners.  Greste, along with Britons Sue Turton and Dominic Kane, have worked as correspondents for Al Jazeera English in Cairo.  A fourth defendant, Dutch journalist Rena Netjes, has never worked for the broadcaster.

The other five defendants are students arrested on 31 December and 2 January. According to a press statement by the Muslim Brotherhood-aligned group Students Against the Coup, “The students have never once met [the journalists] before their trial, a fact that has been verified by the journalists and the students themselves in one of their court appearances.”

Dubbed the “Marriott Cell” by the prosecution, Fahmy and Greste were arrested from two rented suites at the Marriott Hotel in Zamalek, which they had been using as a base for operations, on 29 December. Egyptian producer Mohamed was arrested on the same night from his house in suburban Cairo.

At the end of February, demonstrations were held in 40 locations worldwide under the banner “Journalism is not a crime”. Protesters covered their mouths in a symbolic gesture of solidarity with the imprisoned journalists.

Al Jazeera Arabic reporter Abdullah Elshamy, not listed in the criminal complaint, has been detained without charge since being arrested while covering the dispersal of the pro-Mohamed Morsi sit-in at Rabaa Al-Adaweya Square on 14 August.  He has been on a hunger strike since 21 January in protest of his imprisonment.