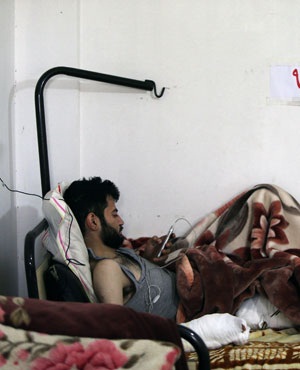 AFP – Young Syrian rebel commander Mohammed limps from an injury suffered in “insane” army shelling of his native Qalamun region as he tells of his perilous evacuation across the border into Lebanon.

Mohammed, who gave only one name, is being treated in the small border town of Arsal, which has turned into a refuge for more than 100,000 Syrians fleeing the war in their country and a makeshift rehabilitation centre for scores of wounded fighters.

Like most of Syria’s rebels, Arsal’s residents are Sunni Muslim and they are sympathetic to the three-year revolt against President Bashar Al-Assad.

Arsal too has suffered violence, including Syrian air strikes, incidents pitting Lebanon’s army against Lebanese and Syrian extremists, and on Saturday a car bomb that killed three soldiers.

For now, Mohammed’s hopes of returning to his own town of Yabrud have been shattered, as the army and its Lebanese ally Hezbollah consolidate their control over much of the Qalamun mountains.

During the last days of the battle for Yabrud, “there was insane shelling. Twelve men died around me, only one other man survived,” said the 26-year-old.

“I was taken to Arsal for treatment because the field hospital in Yabrud was not equipped to help me.”

The journey from Qalamun to Arsal, along a dangerous mountain road, was hell.

“They drove me here under cover of night for two hours, with the headlights off and a [Syrian air force] helicopter hovering above us,” he said, adding that he was in “immense pain” all the way.

“Then, when I head Yabrud had fallen, I cried for two days,” he said, as he walked slowly clutching his black prayer beads, his dark eyes glowing as he pointed at a rocky hill separating Lebanon from Syria.

“Yabrud is my town, where I have always lived, where my family and friends lived,” added Mohammed, a former marketplace vendor-turned-rebel in the uprising against Assad.

Because of their geographic proximity, Arsal has long-running trade and family links with Qalamun.

Arsal’s population sympathises with Syria’s revolt, and the town has become a haven of sorts for refugees, including scores of wounded fighters in need of life-saving treatment.

Qassem Al-Zein, a Syrian doctor who heads the medical effort for refugees, said Arsal was open to wounded people from the whole of Qalamun.

But the staff at two field clinics in a small border town simply cannot cope.

In one of the clinics, 23-year-old rebel Marwan shares a room with three other men, as Zein helps him gain strength in his injured, emaciated right leg, after he lost his left leg in army shelling.

The room is bare, with only a black coal heater to stave off the winter chill.

“God willing, you will learn to walk again with a prosthetic limb,” Zein told Marwan.

“Here we have 20 beds” for the wounded, said Zein, who once headed the national hospital in Syria’s Qusayr, also a onetime rebel bastion that fell last year to army and Hezbollah control.

At the time, Zein helped evacuate “hundreds of wounded people” to Arsal.

The flow of wounded again shot up during this year’s Qalamun fighting, “with up to 60 one day during the battle for Yabrud” earlier in March, he said.

Lacking a CT scan machine and other specialised equipment, “there is very little we can do for people with head or nerve injuries,” Zein told AFP.

“In recent weeks, eight people have died because we could not transfer them in time” to other hospitals in Lebanon, Zein said.

Transferring any wounded from Arsal to other parts of Lebanon requires coordination with the authorities through the national Red Cross and the International Committee of the Red Cross.

While the Red Cross has no facility in Arsal, its volunteers helped transfer around 10 people who had been wounded in Yabrud, ICRC spokesperson Samar Al-Qadi said.

“Any war wounded has the right to get the treatment he or she needs,” she told AFP.

But with the Syrian army and Hezbollah on the offensive in Qalamun, and with their weekend takeover of the border towns of Flita and Ras Al-Maarra, evacuations to Arsal have become more difficult than ever.

Zein said 11 wounded people arrived on Saturday, though he feared many others were trapped in Qalamun.

“The routes out… are being bombed,” he sighed.

Mohammed, the Yabrud rebel, agreed: “It will be very hard for wounded people to make that journey here now, if not impossible.”