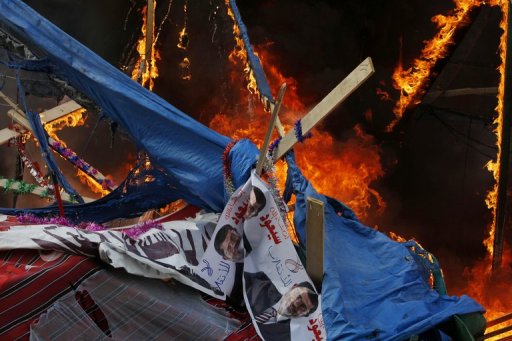 The defence team representing Supreme Guide of the Muslim Brotherhood Mohamed Badie and 50 others walked out of court today, claiming the judge said to one of the defendants, “hold your tongue”, defence lawyer Mohamed Damati said.

It is standard practice for lawyers to walk out of a courtroom after requesting a recusal of the presiding judge, Damati said.

The defendants in the trial stood accused of “forming an operations room to direct the Muslim Brotherhood terrorist group to defy the government during the Rabaa sit-in dispersal, and to spread chaos in the country [by] breaking into police stations, government institutions, private property and churches.” Amongst the defendants are prominent Brotherhood members such as former spokesmen Mahmoud Ghozlan and Gehad El-Haddad.

The trial was postponed until 6 April.

Badie was shouting loudly from inside the cage in the courtroom, condemning recently announced presidential candidate Abdel Fattah Al-Sisi. He described the former military chief as a criminal, while other defendants held up four fingers, a symbol associated with the Rabaa Al-Adaweya sit-in to support former president Mohamed Morsi following his ouster. The sit-in was dispersed amid violent clashes in August 2013.

Spokeswoman for the Muslim Brotherhood Wafaa Al-Banna described the trials against Brotherhood members as “political”. Authorities are “getting ready for elections,” she said.

“At one time you feel they are going to give them all death penalties and other times you feel like they don’t even know what to do,” she added. “It’s just a farce.”