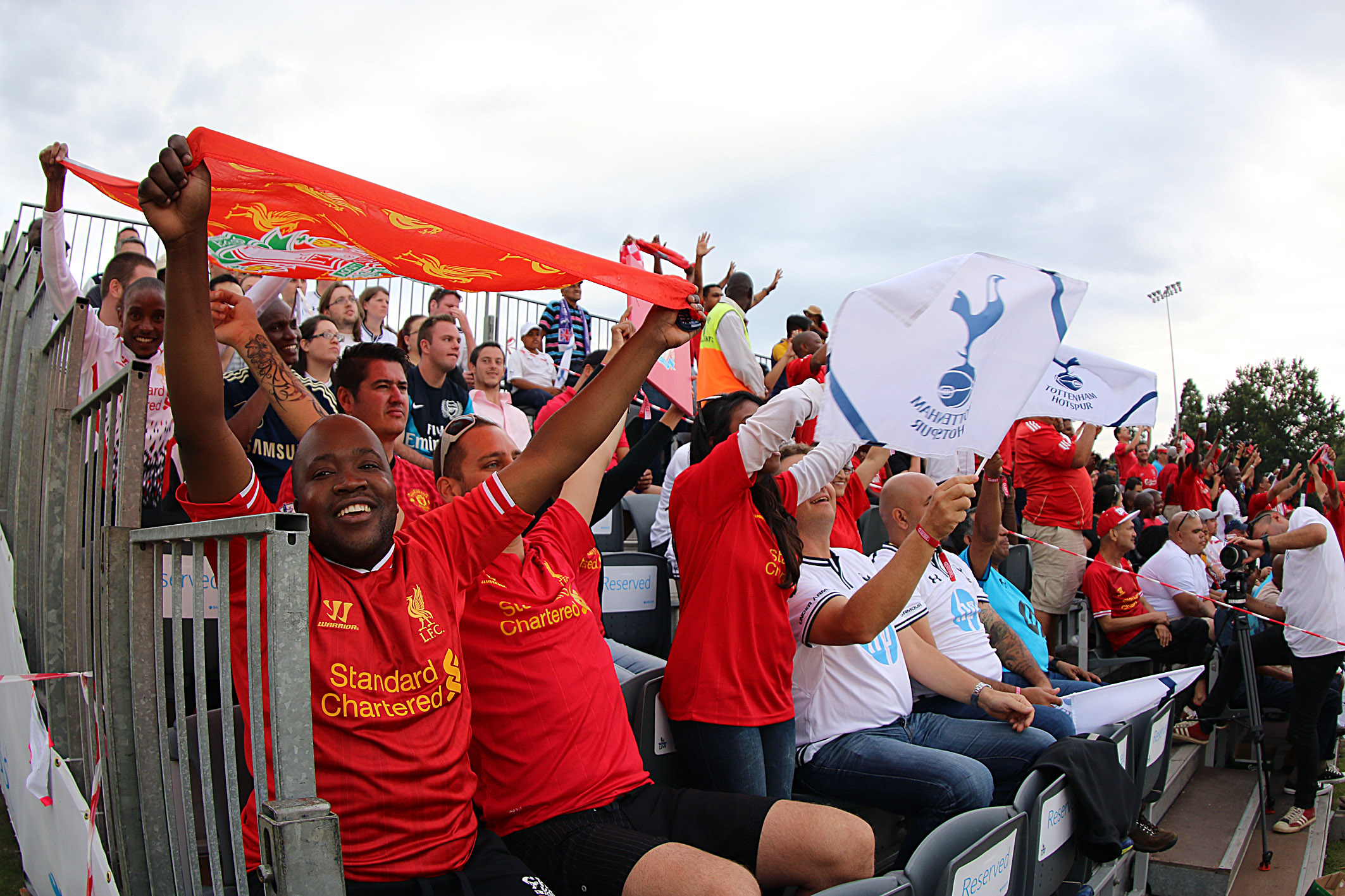 Barclays bank and the Premier League got together to create “the ultimate fan experience” to say a big thank you to all the fans of the world’s most watched football league. The event is part of Barclays’ Thank You campaign, to thank the fans, community leaders and the players and managers of the BPL.

Africa represents 22% of the BPL’s global audience, according to Premier League CEO Richard Scudamore. He attributed the surge in support from the continent to the impact African players have had on the BPL, notably South Africa’s Lucas Radabe, Nigerians Celestine Babyaro and Jay Jay Okocha and current players, such as Ivory Coast trio Didier Drogba, Yaya and Kolo Toure.

The fans began arriving early in the day with queues extending for hundreds of metres, with the majority wearing the colours of their favourite BPL team. It was almost a sea of red as it was clear there was an abundant amount of support for Manchester United, Liverpool and Arsenal. Despite this dominance, fans were wearing shirts from almost all 20 BPL clubs.

Awaiting the revellers inside the fan park was a variety of once in a lifetime opportunities. The Trophy Zone was one of the most popular, giving fans the chance to see the actual trophy that has been lifted by some of the world’s greatest footballers.

The weekend saw families getting involved in the action, as children were given the chance to test their skills in the Pitch Zone and receive training tips from professionals.

Despite the variety of activities available, the fans also came to watch the football and were able to do so on a jumbo 25-metre screen. Five games were broadcast live to the fans and it was a weekend of football that did not disappoint. Chelsea suffered a shock defeat to Crystal Palace, while Arsenal fought back to secure a point against Manchester City. The weekend culminated in the tie of the weekend Liverpool vs Tottenham Hotspur, in which the reds triumphed with a 4-0 thrashing of the London side.

The weekend was largely aimed at thanking the fans for their support of the league under the banner ‘You are football’, a sentiment reinforced by the BPL legends that attended the event.  Ghanaian born Desailly, the Barclays ambassador as for the Thank you campaign said: “What Barclays is doing this weekend is something huge, to give access to the magic of the Premier League through all that is set up.” He added: “We need to make the people [the fans] understand that they are they ones that make the game beautiful like this.”

Speaking on the importance of the fans to the game, the Frenchman said: “They put pressure on us but it’s a real communion. There are key moments in football for a player, it’s when you have conceded or when you are close to the 90th minute and you are 1-0 down and you start to see the crowd help you and allow you to go beyond your capacity, to try and score that goal that will change [the game].” He added: “The type of emotion the fans at the stadium give us, you can never find it anywhere [else]. I can sign a big contract with my company in Ghana or anywhere or in advertising, it will never be the same feeling of being in a 80,000 [capacity] stadium, where you feel the crowd supporting you, it’s something special.”

The fans in the park demonstrated their passion for the game throughout the weekend. Amongst the Chelsea fans, one man, who has supported the club for more than 20 years, was excitedly chanting throughout the game. He refused to comment specifically about his team’s recent signing of Egypt’s Mohamed Salah, saying: “As soon as they put on that blue shirt, they have my support; it doesn’t matter who they are.”

The same man was left distraught as Crystal Palace beat the then BPL leaders; he sat slumped, with his face in his hands, looking up occasionally to shake his head in disbelief.

The fans once again showed their passion during the weekend’s last match between Liverpool and Tottenham. Both sets of fans made their voices heard, rising out of their seats at the key moments and exchanging friendly banter with opposing fans. Even a sudden and heavy downpour didn’t scare away the supporters, and despite the 4-0 score line, the Spurs fans stayed until the final whistle, expressing their undying support for their club, whatever the circumstances.