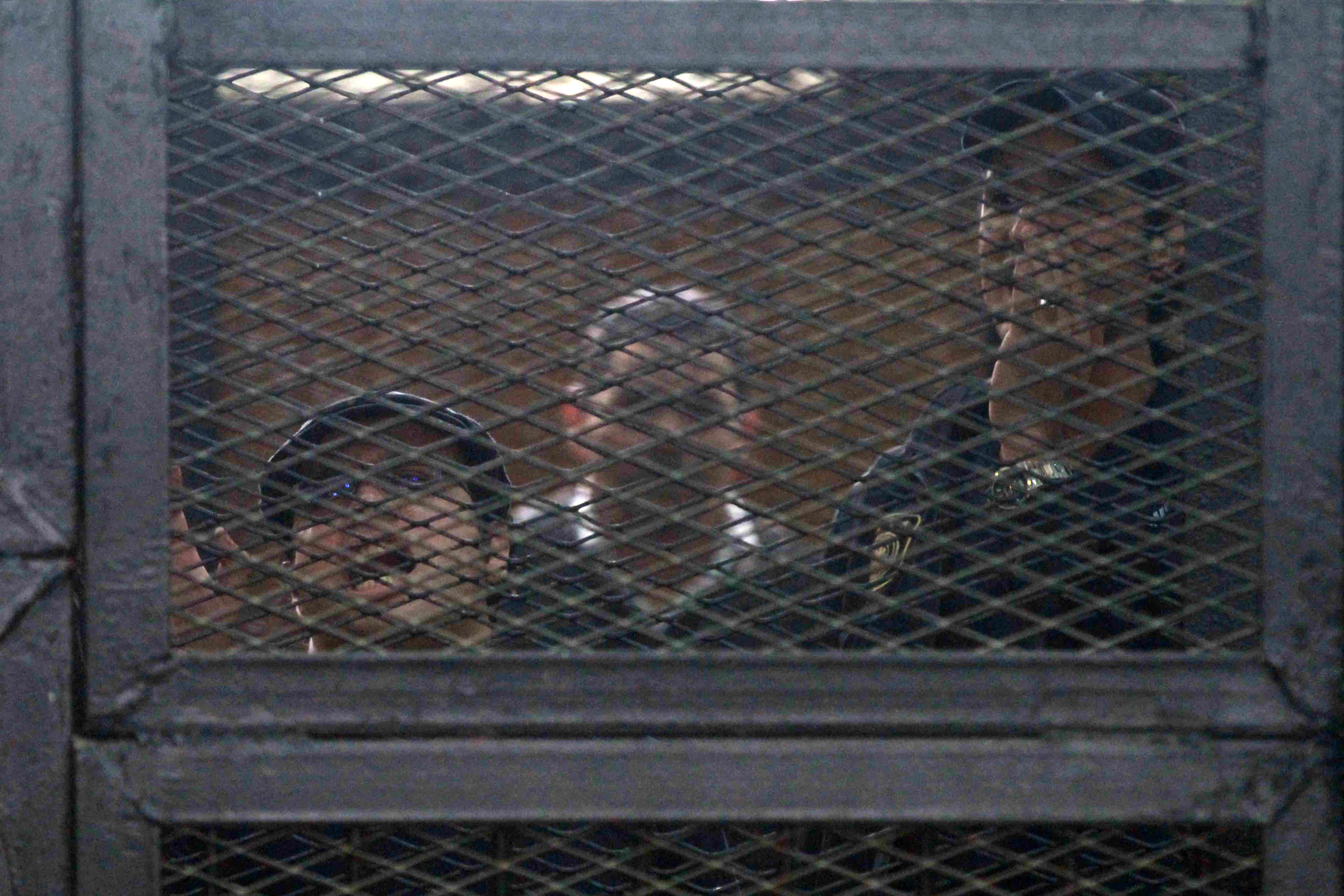 The wife of a prominent 25 January revolutionary charged with violating the Protest Law started a sit-in at the presidential palace Monday after an appeals court upheld a three-year prison sentence for him and two other prominent activists.

Ahmed Maher, co-founder of the 6 April Youth Movement; Mohamed Adel, a co-founder and member of 6 April’s political bureau; and Ahmed Douma, a well-known blogger were each sentenced to three years in prison with hard labour and fined EGP 50,000 on 22 December for protesting without the Ministry of Interior’s approval under the controversial Protest Law, rioting, “thuggery”, using violence against Abdeen Courthouse security personnel and possessing melee weapons. Abdeen Misdemeanor Court affirmed the conviction Monday.

Douma’s wife Nourhan Hefzy accused judges of giving out sentences “according to the political stances of the regime”, before heading downtown to stage a sit-in.

“This is a pure political ruling,” said Amr Imam, a member of the activists’ defence team. He pointed out that the 20 people arrested in Maadi on the 25 January Revolution’s third anniversary in Maadi were referred to court under the same legal pretexts, but the Maadi detainees were acquitted, while Maher, Adel and Douma were imprisoned.

The ruling has “nothing to do with judiciary,” he said.

“The appeals court has failed to undo the worst excesses of the government’s campaign to crush dissent,” she said.

Ahmed Ezzat, a lawyer with the Association for the Freedom of Thought and Expression, said the ruling is illegal, adding that it appeared to be “revenge”, and that there is no evidence to substantiate the charges.

6 April [es1] issued a statement saying the three activists were convicted for breaking the Protest Law, even though they were not protesting, and that witnesses and evidence of the case proved their innocence.

A Daily News Egypt reporter who was covering the clashes that took place in front of Abdeen Court on 30 November saw the clashes break out upon Maher’s arrival at the courthouse, after the 6 April co-founder received a barrage of insults at the main gate of the courthouse and was escorted to the side entrance by Central Security Forces (CSF). The angry mob began throwing chairs and stones at the soldiers, which provoked CSF to respond with batons, tear gas and birdshot to disperse protesters in the premises of Abdeen Court.

Mohamed Douma, Ahmed Douma’s brother, said that “the government’s role is to imprison the revolution.” He said Douma’s health is deteriorating, and that they are not allowed to send him medicine or take him to the hospital.

The case has previously attracted the attention of both local and international NGOs. During the 10 March hearing, the detained activists said security officers assaulted them while they were transporting them from Tora Prison to court, state-owned Al-Ahram reported.

The defence team representing the activist withdrew from court at the detainees’ request. The activists also asked their lawyers to file a complaint to prove the assault. Two days later the United States expressed its concern over the allegations.

On 8 March, the Freedom for the Brave initiative issued a statement calling on the interim government to release incarcerated revolutionaries.

The National Council for Human Rights also issued a report in January detailing the “suffering” of activists in detainment and asking the Ministry of Interior to stop mistreating detainees.