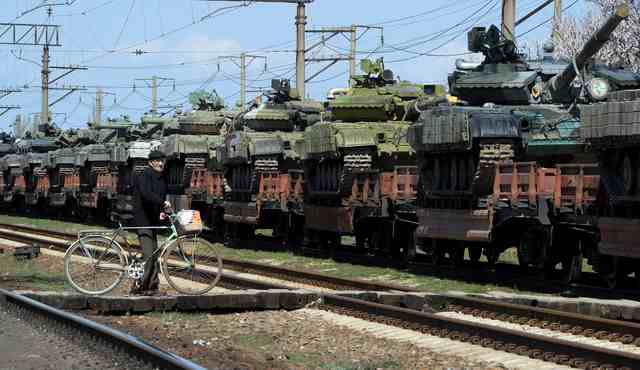 AFP – NATO warned Russia on Tuesday against making an “historic mistake” by provoking a flaring secession crisis in eastern Ukraine that Moscow itself conceded could degenerate into a civil war.

Ukraine’s embattled interim leaders have been waging an uphill battle to keep their culturally splintered nation of 46 million together after last month’s ouster of a pro-Kremlin regime and subsequent loss of Crimea to Russia.

An eerie echo of the Black Sea peninsula’s crisis sounded on Sunday when militants stormed a series of strategic government buildings across a swathe of heavily Russified eastern regions and demanded that Moscow send its troops for support.

Ukraine mounted a counteroffensive on Tuesday by vowing to treat the separatists as “terrorists” and making 70 arrests in a nighttime security sweep aimed at proving the Kremlin’s involvement in the secessionist movement.

An urgent deployment of security forces saw Kiev also regain control of an administration building in Kharkiv and the security service headquarters of Donetsk.

But the separatists still held on to the security service building in the city of Lugansk after breaking into its massive weapons cache and releasing several activists who had been accused of plotting to stage a coup.

And hundreds of militants remained holed inside the Donetsk administration building a day after proclaiming the creation of an independent “people’s republic” and demanding that an independence referendum be held before 11 May.

The heart of Donetsk itself was a mesh of razor wire and hastily-assembled barricades of old tyres that could be set on fire in case the riot police decided to mount an assault on the regional government seat.

But calm had returned to the city of Kharkiv after a night of violence that saw retreating militants throw Molotov cocktails at the administration building as hundreds of police regained control of it.

The months-long crisis threatens not only to splinter the vast nation on the EU’s eastern frontier along its ethnic divisions but also plunge Moscow’s relations with the West to a low that may take decades to repair.

NATO chief Anders Fogh Rasmussen reaffirmed on a visit to Paris that Moscow, which has massed troops along its border with Ukraine, would be making an “historic mistake” if it were to intervene in Ukraine any further.

“It would have grave consequences for our relationship with Russia and it would further isolate Russia internationally,” said the Western military alliance leader.

Russian President Vladimir Putin has vowed to use “all means necessary” to protect his compatriots in Ukraine and is now demanding a decentralisation of power that could push the east further out of Kiev’s reach.

The Russian foreign ministry put still more pressure on Kiev by accusing it of making “military preparations [in eastern regions] that are fraught with the risk of unleashing a civil war.”

It also alleged that the new leaders were deploying private security operatives from a US firm called Greystone whom it dressed up as Ukrainian special forces.

Putin has frequently accused Washington of trying to weaken his hand and once blamed the US State Department for the sudden surge in anti-Kremlin protests that hit Moscow in the winter of 2011-2012.

But the White House has thus far been firm in its resolve, pointing the finger of blame for Ukraine’s mounting problems directly at Putin himself.

Washington warned the Kremlin on Monday to stop efforts to “destabilise Ukraine” and proposed it instead join four-way talks that besides the two nations and Kiev would also include the European Union.

But Russian Foreign Minister Sergei Lavrov said Tuesday that any such negotiations should also include representatives of Ukraine’s southern and eastern regions – a condition implicitly unacceptable to Kiev.

The West’s growing concern underscores the trouble Kiev may have in bringing order to Ukraine’s eastern industrial heartland – a region with ancient cultural and trade ties to Russia.

Acting President Oleksandr Turchynov told a rowdy session of parliament that included fistfights between nationalists and Kremlin supporters that he intended to treat the pro-Russian militants as “terrorists” who will face the full brunt of the law.

“Our security forces did not use arms against peaceful civilians,” said Turchynov.

“The authorities will treat separatists and terrorists who have picked up automatic weapons, who are seizing buildings, in accordance with the constitution and the law — as terrorists and criminals.”

Parliament then unanimously approved a bill doubling the jail sentence for acts of “separatism” committed by a group of people to 10 from five years.