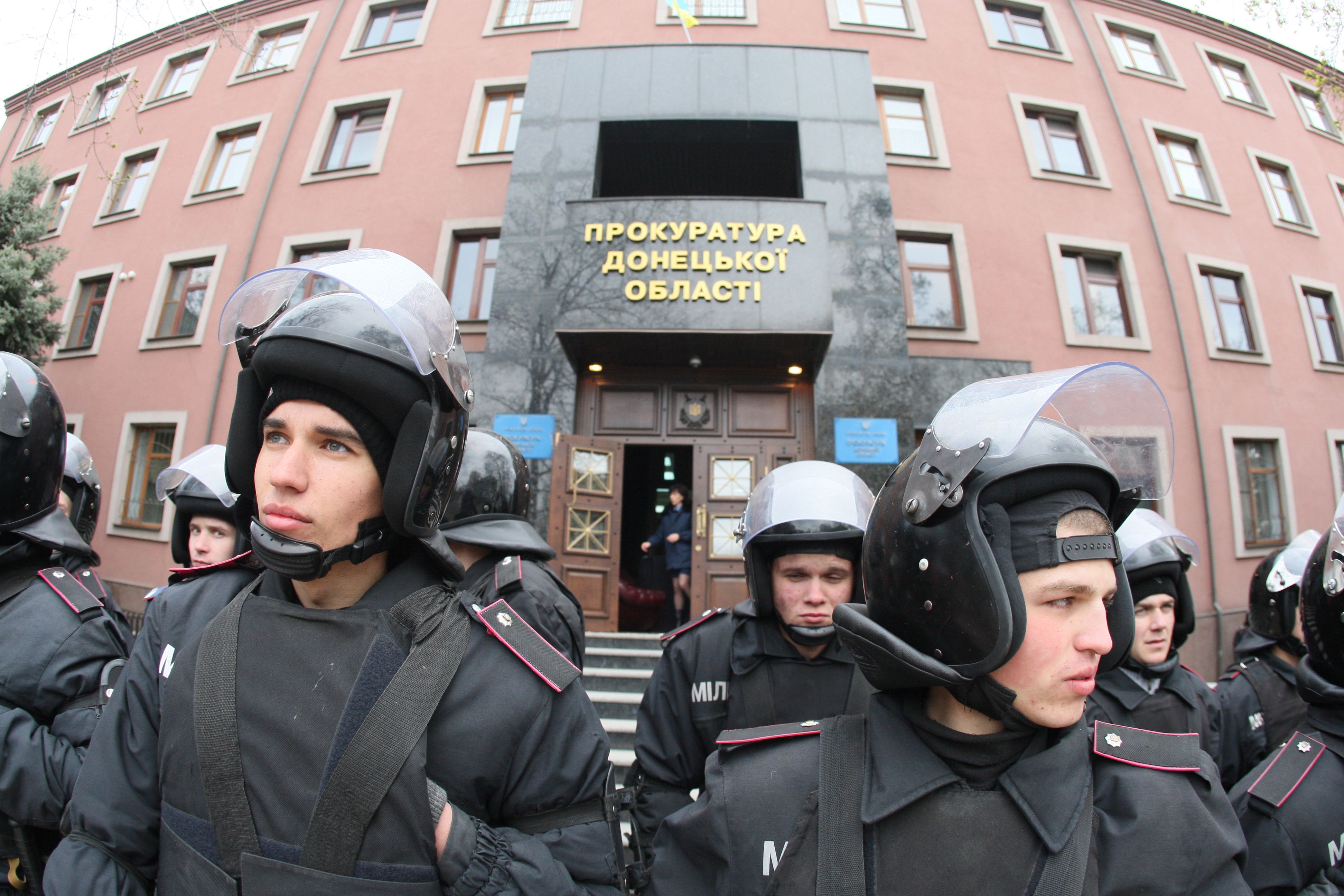 AFP- Pro-Russian separatists retained control of key government buildings in eastern Ukraine Saturday despite a vow by the country’s premier to cede more power to the regions, amid rising tensions between Russia and the West.

Prime Minister Arseniy Yatsenyuk’s promise came during a visit Friday to the coal mining region of Donetsk as militants armed with Kalashnikovs barricaded themselves inside the local government building and demanded a referendum on joining Russia.

That and a similar occupation of the state security office of the eastern city of Lugansk presents Ukraine’s untested leaders with their biggest challenge since their February ouster of a Kremlin-backed president and decision to strike an alliance with the West.

The new Treasury sanctions escalated the tit-for-tat row between Russia and the West over Ukraine after Moscow threatened to cut off gas supplies to its neighbour unless it settled its unpaid bills – a move that could wreak economic havoc on European countries that source gas from Ukraine.

“Crimea is occupied territory. We will continue to impose costs on those involved in ongoing violations of Ukraine’s sovereignty and territorial integrity,” said Treasury Under Secretary for Terrorism and Financial Intelligence David Cohen as he announced the measures.

The sanctions freeze the US-based assets of key Crimean breakaway leaders and gas company Chernomorneftegaz, whose funds were seized by the Crimean parliament and are now managed by Moscow.

Leading economic policymakers meeting in Washington voiced worry Friday that the Ukraine crisis could hurt the world economy, but fell short of taking concrete action to strengthen growth amid signs of discord.

Meeting on the sidelines of the IMF/World Bank spring meetings, G20 finance ministers and central bank chiefs pledged to follow up on reforms and support a $27bn rescue programme for Ukraine, even as Russia continues to menace its neighbour.

But Russian President Vladimir Putin – his troops already massed along Ukraine’s eastern border following their seizure of Crimea – only upped the stakes by threatening to cut off Ukraine’s gas over unpaid bills.

The decision could limit the supplies of at least 18 European nations for the third time since 2006. Each of the previous interruptions also coincided with attempts by Ukraine to pull itself out of the Kremlin’s historic sphere of influence.

The Kremlin’s emphatic response to its possible loss of control over the nation of 46 million people has plunged its relations with the West to post-Cold War lows and forced NATO to step up the defence of former Soviet satellite states.

Republican Senator John McCain, a former presidential candidate and an influential Washington foreign policy hawk, said that NATO satellite images made it clear that “Russia has poised a menacing force near the Ukrainian border as part of its effort to destabilise Ukraine and destroy its chance for independence, self-determination and democracy.”

He accused the Obama administration of not doing enough to deter Russia.

The sabre rattling has set an ominous tone to the first round of four-way talks on the crisis, which will bring together the United States, European Union, Ukraine and Russia in Geneva on 17 April, the US and EU confirmed.

“I have to say that we don’t have high expectations for these talks,” said US Assistant Secretary of State Victoria Nuland.

The new US sanctions target Aleksei Chaliy, the de facto mayor of Sevastopol, who signed the deal on 16 March to unite Crimea with Russia.

He is joined by Crimea’s deputy prime minister Rustam Temirgaliev, and Yuriy Zherebtsov, said to be among the main organisers of the peninsula’s 16 March secession referendum.

Electoral officials Mikhail Malyshev and Valery Medvedev were targeted for administering the vote, which has been denounced as illegal by the US and its European allies.

The former head of the Ukrainian security services, Pyotr Zima, who was dismissed after swearing an oath of loyalty to the new Crimean authorities, was also placed on the list.

They also targeted the former vice speaker of Ukraine’s parliament, Sergei Tsekov, who helped pave the way towards the March referendum in Crimea on separating from Ukraine.

A first wave of sanctions unveiled in March notably blacklisted officials and businesspeople close to Putin to protest against Moscow’s takeover of Crimea.

Yatsenyuk’s main preoccupation at the moment is trying to end the separatist sieges that have exposed Kiev’s limited sway over the heavily industrialised east.

He flew to Donetsk to enlist the help of its mayor and Rinat Akhmetov – Ukraine’s richest man and one of its most legendary powerbrokers – in finding a bloodless solution to the militants’ occupation of the local government seat.

Yatsenyuk immediately addressed one of the protesters’ most pressing concerns by promising never to limit the use of the Russian language in the region.

He also admitted that he “must respond to people’s desire to have more regional authority”.

Kiev has previously said it was ready to grant more powers to the regions while stopping well short of creating the federation sought by Russia.

Yatsenyuk said the devolution of power would be detailed in a new draft constitution to be made public by the time Ukraine holds snap presidential polls on 25 May.