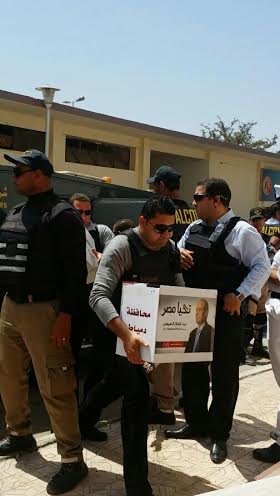 The campaign’s legal adviser Moahmed Bahaa Abu Shaqqa arrived to the Supreme Electoral Commission (SEC) in Heliopolis midday Monday to provide the electoral body with the required documents for candidacy which include medical records and signatures of support from voters.

Other documents required from presidential candidates include criminal records, educational qualification documentation, financial disclosure and a receipt showing payment of an EGP 20,000 insurance deposit to the Presidential Elections Commission (PEC), as dictated by the newly passed presidential elections law.

The campaign for the former Minister of Defence collected a total of approximately 200,000 signatures backing his candidacy, according the campaign,  about 175,00 more than required by law.

Al-Sisi visited with the National Council for Women (NCW) on Sunday, vowing that “there is no place for authoritarian rule at all in future Egypt”, adding that “public opinion is driving Egypt at the current moment”.

“There is no going back,” said Al-Sisi in his address to the council. “The Egyptian people that took part in two great revolutions or its destiny cannot be controlled, especially after the country witnessed huge political development over the past years,” he added.

The former minister also said that regardless of whom the next president was, he would not be able to take the country back to the way it was before 25 January 2011.

He also discussed the status of women with the NCW. “You represent the mother, sister, wife and daughter, and your responsibility to society is very large,” he said.

Al-Sisi, who announced his resignation from the armed forces and his bid for presidency in the same address on state television last month, is the first presidential hopeful to submit official documents for candidacy.

The deadline put in place by the PEC was 20 April. Other hopefuls in the race include Nasserist politician Hamdeen Sabahy, lawyer and President of Al-Zamalek Sporting Club Mortada Mansour and news anchor and activist Bothaina Kamel.

Al-Sisi has enjoyed support by a large segment of the population and political groups. Al-Wafd Party, which announced its support for Al-Sisi, gave the former field marshal’s campaign its party offices to use to collect signatures.

Presidential candidates must be at least 40 years old on the day the door for candidates opens and have never held the citizenship of another country. Candidates also must have either served their compulsory military service or have been legally exempted.