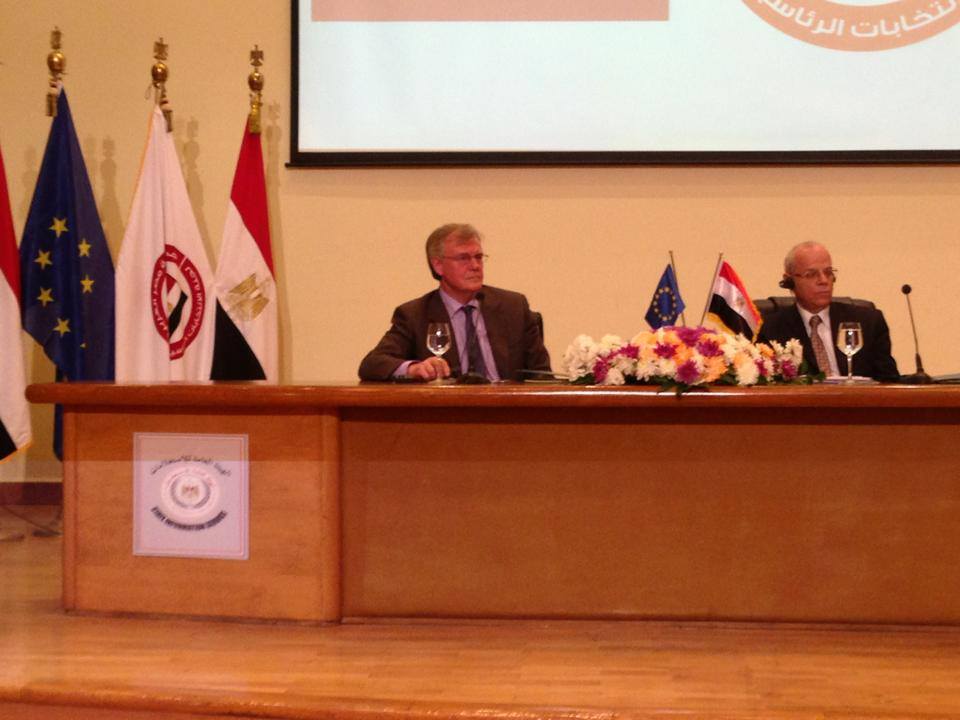 In two separate ceremonies, Egypt and the European Union have signed two Memoranda of Understanding, which will see a full Election Observation Mission (EOM) operating during the May presidential elections.

In a ceremony on Monday held at the Ministry of Foreign Affairs, Head of the EU Delegation to Egypt James Moran and Deputy Minister for African Affairs Hamdy Loza signed the Memorandum of Understanding to facilitate the EOM. This followed a separate ceremony held on Sunday evening, in which Moran and head of the Presidential Elections Commission (PEC) Anwar Al-Rashad Al-Assi signed an agreement.

The EOM will be comprised of 150 members of the European Parliament representing nations of the European Union as well as observers from Canada, Switzerland and Norway as well as diplomats from embassies of EU countries in Egypt, said a Sunday foreign ministry statement.

“The launching of this EOM is part of a much broader picture of continuous engagement with Egypt,” said Moran. “That engagement is profound, as shown most recently here by Catherine Ashton’s visit last Thursday. Election observation is an expression of the EU’s concern to support inclusive, transparent and credible elections as part of its policy to strengthen democracy, the rule of law and human rights.”

The head of the European Commission is charged with appointing a chief observer for the EOM. The core experts of the EOM “are chosen on the basis of their experience from a pool of experts” according to EU regulations. The observers are “picked by the Commission from a selection of candidates proposed by Member States” and the European Parliament also has the opportunity to send a separate delegation to observe the elections”.

Ashton visited Cairo last week to finalise details of the EOM, which the Egyptian interim government invited the EU to establish.

The foreign ministry said the agreement “reflects the significant support from the EU of the democratic transition process”. The ministry added that the PEC has also extended invitations to observe the presidential elections to the African Union, Arab League, Community of Sahel-Saharan States, nations belonging to the Common Market for East and South Africa and the Organisation of the Francophonie.

A Memorandum of Understanding, according to the United Nations, “is an international instrument of a less formal kind”. It is not legally binding.

The EU did not fully observe the January referendum on the constitution, and instead dispatched a smaller Expert Electoral Mission. The mission’s report was not made publically available.