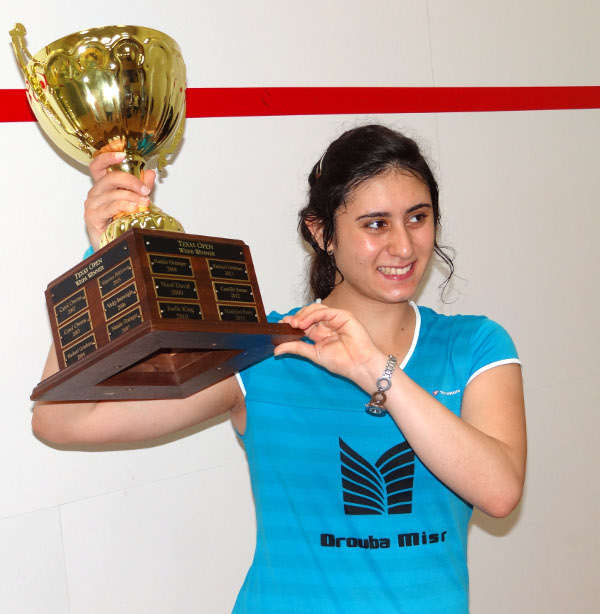 The match brought to a climax a sensational week for the 18-year-old qualifier from Alexandria who removed three seeds – including Malaysia’s event favourite and world No7 Low Wee Wern – en-route to the final of the WSA Gold 50 event at The Downtown Club at the Met.

Pallikal, the world No12 from Chennai, was celebrating the biggest Tour final of her career – while world junior champion El Sherbini was continuing the form of her life which had seen the youngster reach last month’s WSA World Championship final after upsetting world number one Nicol David.

“Both players have similar attacking styles but Pallikal showed more patience in the second game, working solid tight drives and controlling the pace well, giving El Sherbini fewer options to take the ball in short. Pallikal held on to take the game, but lost focus in her game plan, becoming increasingly rattled by the referee’s decisions.

“Nour stepped up in the third game, working in nice holds and great length, adding some of her trademark sublime drop shot nicks to take the lead. More conversations with the referee from both girls, and to Pallikal’s frustration the third ended with a stroke to El Sherbini off a Pallikal drop shot.

“The fourth was the closest of the games, point for point to seven-all with both girls working more length and showing good patience before attacking. El Sherbini managed to pull away and gain a couple of points, giving her a cushion at 10-7.

“Pallikal fought back, holding her nerve and hitting some great shots to work El Sherbini around the court and save one match ball, but that was all she managed as El Sherbini held on to take the match, backing up her impressive form from the World Open to take the title here at the Texas Open.”

El Sherbini was quick sharing her joy with her Facebook fans: “So happy to win my fourth and my biggest title in my career in the Texas Open – it’s been an amazing week here started from the first round of the qualification.

“To win the tournament and to beat some seeded players (Omneya Abdel Kawy no 11, Wee Wern no 7, Camille Serme no 6 and Dipika Pallikal no 12)

“Hopefully I can make it to the top 10 in May’s ranking. Thank you everyone for your support. Now it’s time for some shoppingggggg!”