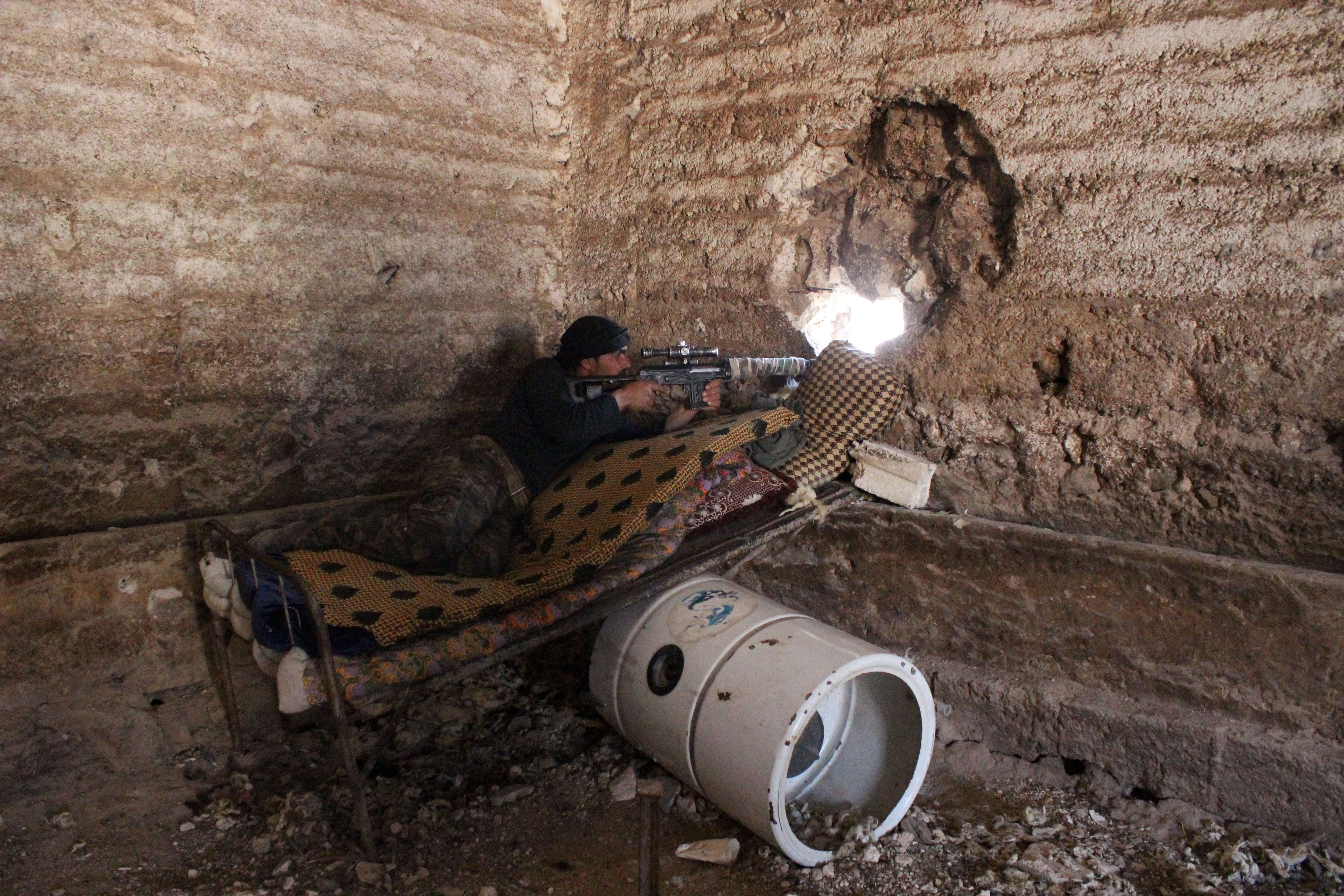 AFP – Lebanon’s Hezbollah movement is gaining new combat experience in Syria, shedding its guerrilla tactics to fight alongside an army, and shifting its narrative to explain the battle against “Sunni extremists”.

Its forces, who used their homeground advantage and methods such as underground tunnels against Israel’s army in Lebanon, are now the targets of unconventional warfare on unfamiliar terrain in Syria.

And the mothers of many of its fighters, who once sent their sons to battle the “Zionist enemy”, now pray for them to be martyred fighting extremist Sunnis who make up part of Syria’s opposition.

The engagement in Syria has given the Shi’a group a chance to initiate new recruits, experts say.

“A new generation of Hezbollah fighters is getting ‘blooded’ in Syria,” Andrew Exum, a former Lebanon desk officer at the US Defence Department, told AFP.

“I imagine they’re getting very good at small unit tactics and battle drills against a live opposition.”

Hezbollah is believed to have about 5,000 fighters in Syria at any given time, with thousands more preparing to deploy.

Their officials say so many men signed up last year that they are no longer actively recruiting for the Syria front.

Initial training for those who pass scrutiny of their religious credentials and background checks, is carried out in Lebanon, where courses last from 40 days to 3 months.

Additional training is provided in Iran for about two months, with a focus on heavy weaponry and preparing members for command positions.

Fighters who have battled both Israel and the rebels in Syria seeking to overthrow President Bashar Al-Assad describe them as very different experiences.

“In Syria there are many enemies, the Islamic State of Iraq and the Levant, Al-Nusra Front, the Free Syrian Army.

“We know our land well and command it easily, but in Syria the terrain is not as familiar to us, and there is a lot of variety: desert, mountains, valleys.”

“Hezbollah is conducting operations, including offensive ones, and not just fighting tactical battles,” he wrote in a Combatting Terrorism Centre report.

“This is warfare of a different kind… involving larger formations, longer periods of time, in more complex manoeuvres.”

Hezbollah’s engagement in Syria has also seen it take on a significant role training Syrian forces, who its members say are woefully unprepared.

“They have no experience in urban warfare or how to deal with a guerrilla force, so we lead the way in battle and have trained them on how to conduct themselves and use certain weapons,” he said.

That experience, as well as the chance to introduce new fighters to combat, is “valuable” for the group, an April report by the Institute for the Study of War said.

“Hezbollah now has a cadre of fighters that has experience conducting offensive operations in urban environment.

“Hezbollah units have also gained experience coordinating with allied forces in combat, as well as logistical sustainment over longer periods.”

But the conflict has not been without costs for Hezbollah, which has lost about 300 fighters in Syria.

Experts say not all the group’s experience in Syria, where it is allied with the better-equipped party and on the offensive, will be relevant to any new defensive conflict with Israel.

And the group’s intervention has made it the target of an unprecedented wave of attacks by extremist Sunni groups against its Lebanon strongholds.

Hezbollah has also been forced to shift its narrative away from a traditional singular focus on Israel.

In multiple speeches, Hezbollah chief Hassan Nasrallah has said the group is fighting extremists in Syria to prevent them entering Lebanon.

He has also worked to tie the group’s old enemy Israel to its new one, referring to the rebels as an “American-Israeli-takfiri project,” using a term for Sunni extremists.

For many Hezbollah fighters, the battle is cast as a way to protect Shi’a holy sites in Syria and their sect more broadly, according to Philip Smyth, a researcher at the University of Maryland who focuses on the movement.

“The conflict is being presented as a defensive jihad for Shi’a shrines combined with an undercurrent regarding the existence of the sect in the region,” he told AFP.

The narrative and the group’s involvement has stirred sectarian tension between Lebanon’s Shiites and Sunni residents who back Syria’s uprising.

But among the Hezbollah faithful, there is little sign supporters are losing patience with the intervention.

In one Lebanese village, the yellow flags of Hezbollah flapped overhead as a mother received condolences on the death of her son in Syria.

Her three other sons are still across the border fighting.