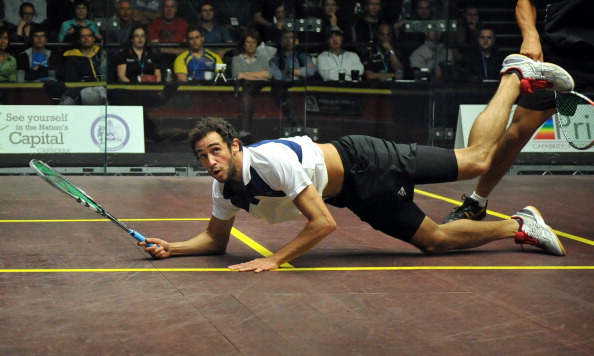 Egyptian squash superstar Ramy Ashour remains on course to retain his EL Gouna International Squash Open title after romping to a 3-0 victory over Finnish challenger Olli Tuominen in his opening match in the 2014 event.

The World No.4, who won the last staging of the PSA World Series event on the Red Sea in 2012, took just 37-minutes to see off Tuominen 11-9, 11-8, 11-6 and will take on dangerous German Simon Rosner in the second round Wednesday.

“Sometimes the first round in events like this can be more pressuring than finals and Ollie made it very tough for me today,” said Ashour.

“I knew it was going to physical and he pushed me hard. I had to be really focused and concentrated from the first point all the way to the last point and maintain my rhythm so I’m pleased to get through.

“It’s amazing to be back in El Gouna and playing a World Series event in Egypt. It’s great for the country especially at this moment in time and it’s thanks to tournament organiser Amr Mansi who has worked very hard to put this event on and to help raise squash in Egypt.”

Former World No.1 Karim Darwish kept up his hopes of overturning his recent run of poor form on the PSA World Tour and winning a first World Series event since the 2010 Qatar Classic by beating compatriot Ali Anwar Reda 3-1.

The World No.9, who admits to reducing his training regime in recent months, failed to progress past the first round in the recent Windy City Open and Canary Wharf Classic but is aiming to put in a strong run on home soil.

“Overall this season hasn’t been that great as far as my squash is concerned,” said Dawrish.

“I know I’m not training as much as I should and previously did but I still don’t want to lose and especially not in Egypt and not with my wife and baby here.”