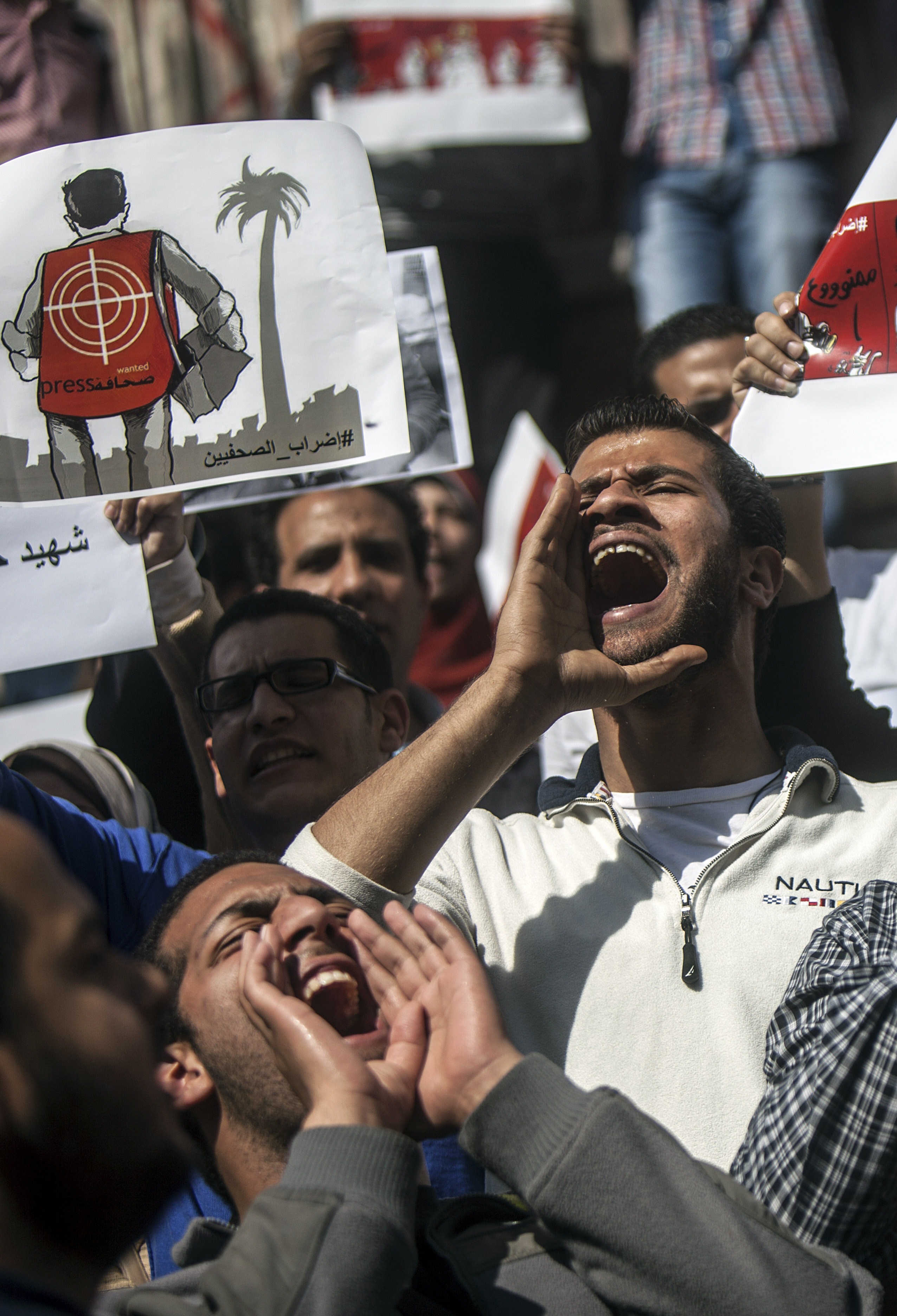 The Press Syndicate condemned the “recurrence of crimes” that target journalists and called for an immediate and indefinite strike from fieldwork in a statement on Monday.

The syndicate said it “strongly condemned the crime of assaulting two colleagues using live ammunition and birdshot”, and called for a silent protest on Thursday, where journalists are to carry their pens and cameras, to demonstrate their anger at the deliberate attacks they face. The statement came hours after two journalists were injured while covering student protests at Cairo University.

One of the journalists, Khaled Hussein, works for the private newspaper Youm7 and has undergone surgery and now in stable condition after he was shot in the chest. The other, Amr El-Sayed, a photographer who works for Sada El-Balad news service, is also in stable condition. He sustained a birdshot injury. The protests also left one student dead.

Abdel Nasser Nouri, who heads the photo and multimedia section in Al-Badil newspaper, said both Hussein and El-Sayed were targeted and were using cameras at the time. “The police targeted the photographers,” Nouri said. He added that journalists from his newspaper and journalists working for agencies were also being targeted.

It was not random, he said, adding: “The crisis lies in the targeting process.”

Nouri, himself a photographer with experience in covering conflicts in Syria, Libya and Gaza, partook in a one-day strike by photojournalists on 4 April, where they expressed their rejection of the increasingly unsafe working conditions they face. The strike came a week after Mayada Ashraf, a 22 year old journalist, was shot dead while covering clashes in March.

The Press Syndicate asserted that targeting journalists and photographers “has become a very dangerous phenomenon” that reflects “a clear and deliberate” approach that aims to terrorise journalists such that they are unable to carry out their professional duty of reporting facts to the public. It denounced the “failure” of concerned authorities in providing protection to journalists carrying out fieldwork.

The syndicate called on concerned authorities to quickly investigate the incidents, identify the perpetrators, “whoever they are, whether they are from the security forces or protesters” and to promptly bring them to justice. It stressed that it will take all urgent legal procedures to guarantee their rights.

The syndicate also criticised what it described as the “extremely slow” pace of investigations into former incidents of assaults on journalists and “not bringing any of the perpetrators to justice”. It called on editors in chief and chairmen of newspapers to send a list of the names of journalists assigned with fieldwork to the syndicate, which will proceed to enroll them in trainings, starting next week, and introduce them to occupational safety rules and methods to protect those working in hazardous locations.

According to press freedom watchdog, the Committee to Protect Journalists (CPJ), 10 journalists have been killed in Egypt since 2011. The most recent death was that of Mayada Ashraf, the first in 2014; six of the deaths took place in 2013.

In February, Egypt ranked 159th out of 180 listed countries in the 2014 World Press Freedom Index, a report annually released by Reporters Without Borders.

Local and international NGOs have repeatedly placed the safety of journalists in Egypt under the spotlight in recent months as conditions for journalists continue to deteriorate. High profile events, like the coverage of the constitutional referendum, have been increasingly risky for journalists, with threats either coming from security forces or citizens.