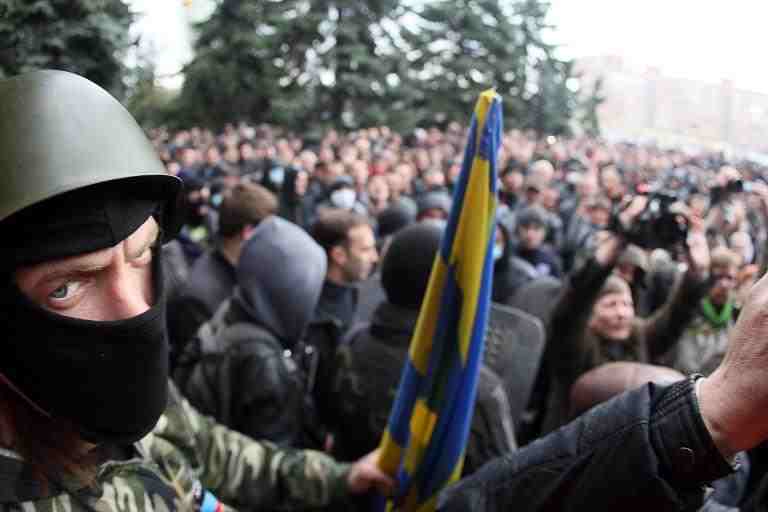 AFP – Ukraine’s Western-backed leader on Tuesday accused Russia of trying to enflame the country’s southeast but said he would proceed cautiously against pro-Kremlin militias consolidating control in the volatile region.

Oleksandr Turchynov’s impassioned charges against Ukraine’s historic master came only hours after a “frank and direct” exchange on the crisis between US President Barack Obama and his Russian counterpart Vladimir Putin.

But the heated phone conversation appeared to break no new ground as the Kremlin chief continued to reject any links to the Russian-speaking gunmen who have occupied town halls and police stations in nearly 10 cities across Ukraine’s struggling eastern rust belt since the start of the month.

European foreign ministers meanwhile held back on unleashing punishing economic sanctions against Russia in hopes that EU-US mediated talks Thursday in Geneva between Moscow and Kiev could help deescalate the most explosive East-West standoff since the Cold War.

But the pressure that the ex-Soviet state’s interim leaders are feeling from Moscow is now also starting to reverberate from their supporters in Kiev who had toppled a detested pro-Kremlin regime in February after months of protests that sought to link up Ukraine firmly to the West.

Turchynov appeared to address that discontent on Tuesday as he stressed that his “full-scale anti-terrorist operation” that aims to dislodge the pro-Russian gunmen from their increasingly entrenched positions must proceed “gradually, responsibly and in a measured way”.

Turchynov told an agitated session of parliament that saw some of his old protest supporters question his leadership that Ukraine was facing an eastern enemy rather than domestic discontent.

“Russia had and continues to have brutal plans,” said Turchynov.

“They want to set fire not only to the Donetsk region but to the entire south and east – from Kharkiv to the Odessa region.”

He added that Donbass – the informal name of the Donetsk region that is now the hotbed of Ukraine’s latest wave of unrest – had a vast majority that was happy to be rid of the old leaders and become part of a broader Europe.

“The Donbass is in colossal danger,” said Turchynov.

“Besides the Russian special special forces, besides terrorists, Donbass also has hundreds of people who have been deceived by Russian propaganda,” he argued.

“And besides them are hundreds of thousands of completely innocent Ukrainians. That is why an anti-terrorist operation must be carried out responsibly.”

Turchynov also announced the formal start of the army’s campaign in the northern parts of Donetsk – a push started on Sunday with the involvement of internal forces but then quickly abandoned when a senior commander was killed.

Kiev’s news programmes have spent much of the past day replaying footage from an attack by militants on a police station in the town of Gorlivka in which men in gas masks pelted the building with Molotov cocktails before smashing its windows with rocks and bats.

One clip showed a green-uniformed man who in a clear voice identified himself as a Russian colonel telling the local police force that it now obeyed his orders and must wear orange-and-black ribbons symbolising Kremlin pride.

The Kremlin set nerves in Kiev further on edge on Monday by announcing that Putin had received “a lot” of requests from eastern Ukraine “to help, to intervene in some form”.

The crisis was exacerbated further still by two episodes with a dash of Cold War-style intrigue: a confrontation in the Black Sea in which a Russian warplane “buzzed” a US destroyer and a weekend visit to Kiev by CIA chief John Brennan.

This charged atmosphere witnessed Putin place a surprise call to the White House that both sides later said covered plenty of ground but appeared to chart no new course.

The White House said Obama accused Moscow of supporting “armed pro-Russian separatists who threaten to undermine and destabilise the government of Ukraine”.

Senior US officials worry that the separatists are using a playbook familiar from the run-up to Russia’s annexation of Crimea last month.

Obama told Putin that all “irregular forces in the country need to lay down their arms.”

And he urged Putin to “use his influence with these armed, pro-Russian groups to convince them to depart the buildings they have seized”.

A Kremlin account of the call said that Putin told the president that US charges of meddling eastern Ukraine were “unfounded”.

It added that Putin blamed the eastern unrest on “the unwillingness and inability by the authorities in Kiev to take account of the interests of the Russian and Russian-speaking population” in the region.

The White House also took the rare step of confirming that Brennan had flown into Kiev over the weekend.

But White House spokesman Jay Carney blasted claims that Brennan’s travel was anything but routine.