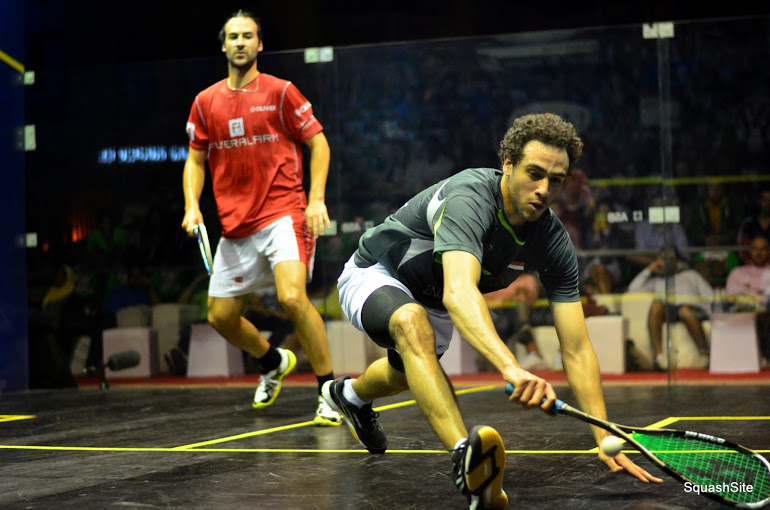 By Nathan Clarke
Home hopes are set to dominate the quarter-final line-up of the 2014 El Gouna International Squash Open Wednesday, when five Egyptian players will take to the court aiming to book their place in the final four.

Ashour was forced to fight hard and produce some of his best squash in recent months to get past dangerous German Simon Roesner 3-0 to set up a mouth-watering clash with Shabana, who was impeccable as he beat Tarek Momen 3-0 to keep his hopes of claiming a second World Series title in 2014 alive.

“I knew I had to keep it tight and organised today against Tarek,” said Shabana. “He had a tough match yesterday but he’s a very strong player and if he gets a chance he will take it but thankfully it worked out for me.

“I’m in my mid-thirties now and the physical side of the game is becoming more and more important and I’ve been working on my fitness to try and stay strong to compete with these youngsters.

“I’m in amongst the best players in Egypt here now and it seems like I’m playing the whole Egypt team. I haven’t been in the national team for a few years so maybe this is a chance to prove a point.”

Former World No.1 Karim Darwish continued his push for a title on home soil by digging deep to record a gutsy 3-2 victory over Laurens Jan Anjema, twice coming from behind to force the match into a deciding game when he showed the hunger that saw him top the world rankings in 2009.

He’ll now face Omar Mossad after the tall Egyptian impressed to record one of the best victories of his career to date, beating Spanish World No.5 Borja Golan 3-1 to reach his first World Series quarter-final since the 2013 Tournament of Champions.

“I have forgotten what it is like to win and get through to the quarter-finals of a World Series event,” said Darwish.

“I haven’t had that for a long time after reaching them consistently for eight or nine years so it’s feeling good.

“I have to dedicate myself 100% if I want to win matches, if I don’t then I get beat in the first round which is only fair but I’m looking forward to playing on the glass court in the quarter-finals tomorrow.”