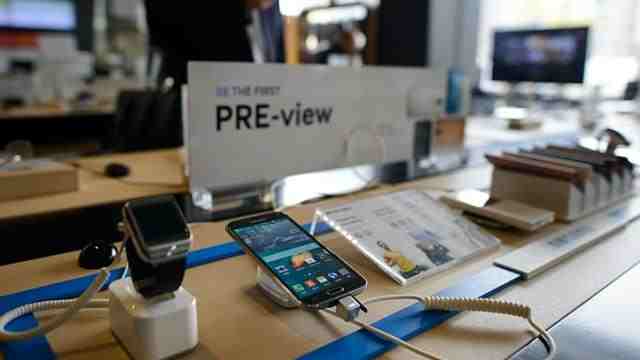 The world’s biggest smartphone maker has slashed prices of the S5, which rolled out globally on Friday, offered a gift pack worth $600, and more than doubled the number of initial launching countries to 125 in a bid to sustain growth in the mobile business, which generates 70% of its total profit.

A smooth launch is crucial for Samsung, which reported its second straight quarter of profit decline earlier this month as margins in the key smartphone business come under growing pressure from cheaper Chinese rivals.

“[The S5] is selling faster than the S4 so far, though it’s difficult to share specific numbers as we’re still at early stages,” Yoon Han-kil, senior vice president of Samsung’s product strategy team, told Reuters in an interview.

“S5 sales should be much better than the S4.”

Though Samsung did not offer any sales target for the S5, the company sold more than 10m S4s in the first month of the phone’s launch. Yoon said the S5 should do significantly better than this.

Initial sales are important to gauge the longer-term chances of success for a product which represents a shift in approach by Samsung.

Until now, Samsung phones have been known for hardware innovations like the S4’s full high-definition screen, while their software was seen as gimmicky compared to the more useful applications on rival Apple Inc devices.

With the S5, however, Samsung has offered few if any hardware revelations. Instead, its focus has been on key enhancements such as water-resistance, a better camera and “ultra power-savings mode” which automatically turns off unnecessary apps when the battery runs low.

“With the S4, we thought smartphones shouldn’t just focus on hardware. They also had to come with a lot of software and services, and that line of thinking did lead us to cram many services into the device,” Yoon said.

“We still feel the same way but this time around, we decided not to put in so many things and only include what the user really needs, so I cut out a lot of services and software,” the senior vice president said.

For example, he said the S5 was shipped to carriers with 40 apps installed as opposed to more than 50 in the previous models.

Yoon said Samsung was working to introduce at least two smartphones running on its own Tizen operating system, a major step in the market leader’s bid to break out of the Android universe.

Samsung wants to build its own ecosystem around Tizen to reduce its heavy reliance on Google Inc’s Android, which powers majority of the South Korean firm’s mobile devices.

It also wants to open its own stream of revenue from sales of third-party apps and services on its devices, challenging the mobile software duopoly of Android and Apple’s iOS.

But expectations for the platform have sharply weakened after a series of delays in product launches. A global patent cross-licensing agreement between Samsung and Google in January further dampened prospects for a Tizen phone, as the deal was seen by some as locking Samsung deeper into Android.

Yoon said that although Android “still needs to be our main business”, Tizen or Windows would be used for markets that Android could not address.

“We had tried to launch (Tizen) with DoCoMo and Orange… but couldn’t because of poor market conditions. We have changed our strategy and will release the phones in a few countries where we can do well,” he said, adding that he thought Tizen would have to account for up to 15% of Samsung’s total smartphone shipments to become a successful platform.

Samsung’s first Tizen phone, which will launch around the end of the second quarter, would be a high-end model and the second would mainly be aimed at the middle of the market to drive volume growth.

The renewed Tizen campaign comes as Google steps up its own efforts to push Android in wearables, underscoring the high stakes in the next promised frontier in computing.

The two tech giants are close allies and fierce competitors in the emerging wearable market.

Samsung dropped Android and switched to Tizen for the second version of its Gear smartwatch which went on sale last week, and

the company wants its Gear smartwatches eventually to become compatible with all Android-based smartphones built by other companies, which will put Tizen directly up against Android.

Even so, Samsung plans to introduce Android-based smartwatch later this year, Yoon said.

Slowing growth in the high-end smartphone market has been a source of consternation for manufacturers like Samsung and Apple amid intensifying competition from Chinese upstarts like Huawei Technologies Co Ltd and Lenovo Group.

“The slowing high-end market is indeed a concern for most manufacturers,” Yoon said.

“But we’re trying out a lot of new things like wearables, convergence with home devices and cars. I think there’ll be synergies here some day and it’ll eventually help us increase premium product sales longer term.”

In the meantime, Samsung is hoping multiple variations of its flagship products will hit as big an audience as possible, while Apple sticks to the premium segment.

Apple is said to be preparing two devices with larger screens, at least one of which is expected to launch in the latter half of the year.

Yoon said Samsung was also planning to launch a new version of the Galaxy Note with a “new form factor” in the second half, without elaborating.

“Our ultimate goal is to make products that consumers really aspire to have. This is how we are trying to find a breakthrough in the stagnant premium market,” he said.