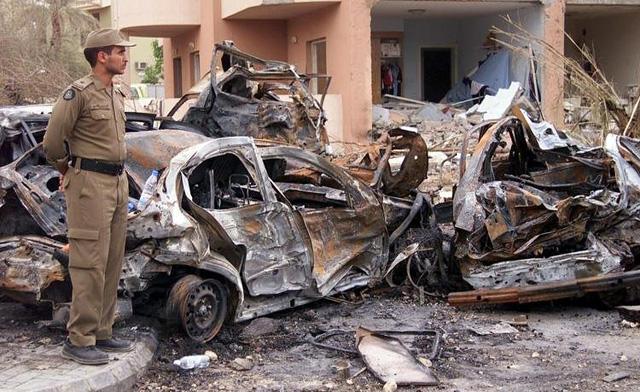 AFP- A Saudi court has sentenced to death five people over deadly 2003 attacks that marked the start of a wave of Al-Qaeda violence, media reported Monday.

Dozens of Saudis and expats were killed and wounded that year in car bombings that ripped through three residential compounds in Riyadh where foreigners lived.

Sabq news website did not say when the five suspects were sentenced to death, but reported that they were found guilty of rigging car bombs used in the 2003 attacks.

Thirty-seven other defendants were given jail terms ranging from three to 35 years, it said.

The suspects were also convicted of plotting and carrying out an attack on a military base near Riyadh and of providing financial and logistical support to their now-slain leader Turki al-Dandani.

Dandani was a top Al-Qaeda operative who was eventually killed in clashes with Saudi police.

Saudi authorities set up specialised terrorism courts in 2011 to try dozens of Saudis and foreigners accused of belonging to Al-Qaeda or of involvement in the wave of unrest unleashed in 2003.

The attacks prompted authorities to crack down on the jihadist network founded by Saudi-born Osama bin Laden, who was killed in a US commando operation in May 2011.

The Saudi crackdown prompted many homegrown jihadists to shift base to neighbouring Yemen, where they merged to form the formidable Al-Qaeda in the Arabian Peninsula (AQAP).

The United States considers the group – which has been implicated in failed attacks on US soil – to be the most dangerous franchise of the Islamist network, and has waged a covert drone campaign against it.