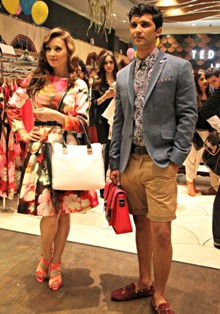 British clothing brand Ted Baker celebrated the opening of its first store in Egypt and Africa on Monday, 14 April in Cairo Festival City Mall. The store opened its doors to customers and members of the press who were treated to a fashion show which featured the spring/summer 2014 collection of menswear, womenswear and accessories, which are now available at the store.

Ted Baker started as a specialist in shirts in 1988, but since then, the brand has branched out in many different directions, and the collections are known for their attention to detail as well as the insertion of quirky details related to the designer’s sense of humour.

Ted Baker stores are known for their special designs and the store that just opened in Cairo is no exception.  Taking its cue from the Nile, the store is said to have used “inspiration, patterns and colours from Life on the River”. Craig Smith, brand communication director for Ted Baker, said: “Opening our first store in Egypt is a fantastic opportunity for Ted, not only to expand the brand’s reach within the African continent, but to further showcase our playful British personality.”

The collection currently in the store and showcased during the fashion show featured a combination of classic cuts and colourful fabrics in both the men and women’s lines. The sleek lines of the dresses and tops and the colourful prints combined timeless lines and modern details to create a collection reminiscent of summer picnics and teas around town and, simultaneously, modern silhouettes. The men’s collection stood out; the combination of classic designs with surprising colours and fabrics create a playful, yet strong and recognisable fashion line.

Introducing Ted Baker to Egypt is the latest venture of Al Futtaim Trading Company. “We’re extremely excited to finally launch the store opening in Egypt to give Egyptian fashionistas the chance to enjoy the new vibrant SS14 collection,” said Mark France, general manager of the retail division at Al Futtaim.

The opening on Monday attracted a lot of attention and the reaction of the crowd to the collections was very positive. With the arrival of Ted Baker to Cairo, yet another known, high-end brand has chosen the city as a starting point to its expansion in the region, indicating that even in the difficult economic times Egypt is living through, the capital is still a fashion centre.