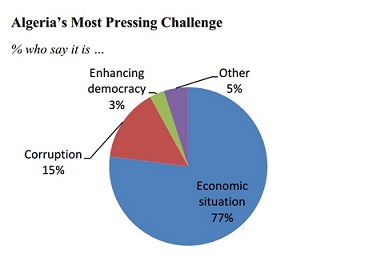 By Michael Robbins, Director of the Arab Barometer

A recent analysis of three public opinion surveys conducted as part of the Arab Barometer from 2006 to 2013 reveals that only a minority of citizens have positive evaluations of the government or the state of democracy in their country. Yet, in the years since the beginning of the Arab spring, the overall trend is one of increasing satisfaction with living conditions. For example, in 2013 four times as many Algerians rate the government’s performance as good compared with just two years earlier (40% vs. 10%). Similarly, the percentage who says that the state of democracy and human rights is good or very good has risen from just 8% in 2011 to nearly a third (32%) in 2013.

Satisfaction with the state of the economy has also increased dramatically during this time period. About twice as many Algerians said the economy is doing well or very well in 2013 (66%) compared with 2011 (32%). This change may be due to the government’s dramatic increase in social spending following the Arab Spring. Nevertheless, the vast majority of Algerians (77%) state that economic issues remain the biggest challenge facing their country. Similarly, in 2013, Algerians were more likely than in 2011 to say that their basic rights were guaranteed, including freedom of expression, freedom of the press, and freedom to vote in elections. In 2013, fully three quarters of citizens said each of these liberties was ensured. One major exception to this trend is the freedom to demonstrate peacefully, which a minority (42%) said was guaranteed in both 2011 and 2013.

Perhaps reflecting on the recent experiences of Tunisia and Egypt, in 2013, most Algerians (78%) expressed favour for gradual changes to the existing system rather than massive and sudden reform. By comparison, in the months after the Arab Spring, only 54% favoured reforms being implemented little by little rather than all at once.

Despite the electoral success of Islamist parties in Egypt and Tunisia following the Arab Spring, religious parties in Algeria enjoy little success. On the whole, Algerians no longer support a significant role for religion in politics. Three quarters of those polled agree that men of religion should not affect how people vote in elections and fewer than three in ten say religious leaders should have influence over government decisions.

The surveys also revealed numerous generational differences and a persistent dissatisfaction among youth. Algerians aged 18-34 are less likely than those 35 and older to rate the government’s overall performance positively or to be satisfied with its efforts on job creation and they are much less likely than older cohorts to support a political party.

Following the events of the Arab Spring, the Algerian regime has undertaken fewer political reforms than many other Arab countries. Nevertheless, by multiple measures, Algerians say that their country’s overall situation has improved significantly during this time. Algerians are now more likely than they were at the beginning of the Arab Spring to say that the economic situation is good, their personal security is ensured, and that the state of democracy and human rights is good.

Like many Arab countries, Algeria suffered from high unemployment in the years leading up to the Arab Spring. Perhaps as a byproduct of the effects of the worldwide economic slowdown, the percent of Algerians saying their country’s economic situation was good or very good declined from 43% in 2006 to about a third (32%) in 2011. However, following the Arab Spring satisfaction with the economy had risen dramatically. In 2013, nearly two-thirds (66%) of Algerians rated the situation as being good (57%) or very good (9%). Overall, younger (18-34 years old) and older (35+) Algerians were about as likely to hold this view in all three surveys.

This dramatic shift could be the result of a number of factors. A major one is the government’s decision, shortly after the onset of the Arab Spring, to dramatically increase social expenditures: public sector salaries were increased by 34%, expenditures on commodity subsidies and social housing were boosted, and lending programmes to the youth bolstered. In total, public spending increased by roughly 25%.2

Nevertheless, it is clear many Algerians remain concerned about the state of the economy. More than three-quarters list economic issues such as poverty and inflation as the biggest challenge facing the country.

Meanwhile, the second most prominent concern is administrative corruption (15%). By contrast, only 3% of citizens say enhancing democracy is the greatest challenge, while a small percentage (5%) specify a range of other issue.

Algerians are also increasingly likely to say that their personal security is ensured or fully ensured than they were in the months following the Arab Spring. In 2011, just over half (54%) of citizens felt secure. By 2013 nearly seven-in-ten (69%) said the same. In part, this increase coincides with the regime’s efforts to crack down on militant groups throughout the country.

In 2013, fewer than half of Algerians said the government is doing a good job overall or on specific issues such as creating jobs, narrowing income inequality, or managing the democratic transition. However, the Arab Barometer finds that ratings of the government’s performance have increased dramatically since the early days of the Arab Spring.

In 2011, satisfaction with the government’s performance was extremely low. Only one-in ten Algerians said that the government was doing a good or very good job. By 2013, four times as many held this view, an increase of 30 percentage points.

Similarly, younger Algerians (26%) were 10 points less likely than older Algerians (36%) to rate the government’s performance on creating jobs as good or very good. However, generational differences were limited to these two issues; younger and older Algerians are about equally likely to say the government is doing a good job narrowing the income gap and managing the democratic transition.

Perhaps linked with growing satisfaction with the government, Algerians are now more likely than in the months after the onset of the Arab Spring to say that reforms should be implemented gradually instead of all at once. In 2011, slightly more than half (54%) of Algerians agreed that reforms should be implemented little by little. In 2013, nearly eight-in-ten (78%) held this view, which is nearly identical to the percentage in the 2006 survey (79%). Perhaps reflecting on the outcome of events in Egypt and Tunisia, many Algerians may have tempered their desire for massive changes, instead preferring gradual reforms of the existing system.

The percentage of Algerians who believe that they enjoy a number of basic rights has increased dramatically since the Arab Spring. In part, this change may be related to the reforms taken by the Algerian government in response to the events sweeping the region. In 2011, the government lifted the state of emergency that had been in place for nearly two decades.

Additionally, the regime adopted new laws governing association, media and political parties which it touted as major steps forward despite claims to the contrary by opposition activists.

In 2011, just over half of Algerians said that the freedom to join a political party and freedom of the press (53%, each) was guaranteed to a medium or great extent. By 2013, more than three quarters said these rights were ensured (80% and 78%, respectively).

Similarly, most Algerians believe that they enjoy the freedom to vote in elections. Nearly seven-in-ten (69%) said this right was guaranteed in 2011, compared with 89% in 2013 (+20 points). The percentage who says freedom of expression is ensured also increased during this period from 60% to 76% (+16 points).

By contrast, a minority of Algerians say the right to demonstrate peacefully is guaranteed to a medium or great extent. In 2011, about four-in-ten held this view (42%). In 2013, the percentage remained unchanged, perhaps a reflection of the government’s ongoing restrictions on freedom of assembly

In early 2011, nearly nine-in-ten citizens (87%) said that no party comes closest to representing their political, social and economic aspirations. Among the remainder, the long-dominant National Liberation Front (FLN) had the greatest support (6%). The National Rally for Democracy (RND) and the Rally for Culture and Democracy (RCD) received the support of 3% and 2% of Algerians, respectively. No other party had the support of more than 1% of the population.

By 2013, Algerians were much more likely to say they favored a political party. Those saying that no party best represented them fell by 25 points to 62%. Meanwhile, support for the FLN tripled to nearly two-in-ten Algerians (18%). The RND again represented the second largest segment of Algerians at 6% followed by the Workers’ Party (PT) at 4%. Two percent or fewer Algerians supported all other parties.

In 2013, older Algerians were much more likely than younger Algerians to identify with a political party. Only half of those 35 and older said that no party represented them. By contrast, nearly three-quarters (74%) of citizens ages 18-34 did not favour any party. Older Algerians were also much more likely than the younger generation to support the FLN (26% vs. 9%). Support for all other parties was about equal between the older and younger generation.

Religion and politics: The ‘post-Islamist era’?

Support for giving religious leaders a role in the political process has declined over the last decade. Although Algerians were divided on the role religion should play in politics in 2006, now only a minority support a substantial role for Islam in politics, a trend that Algerian sociologists describe as the post-Islamist era.

The Arab Barometer is a chapter of Global Barometer Surveys. It has its operational base at the Center for Strategic Studies in Jordan (CSS) and involves close collaboration among the Arab Reform Initiative, the University of Michigan, Princeton University, the Palestine Center for policy and Survey Research and national research centers which lead survey teams in target countries. For the third wave, surveys were conducted in Egypt, Tunisia, Algeria, Morocco, Sudan, Jordan, Palestine, Lebanon, Yemen, Saudi Arabia, and Iraq. The third wave is funded by the Afro Barometer, the Canadian International Research and Development Centre (IDRC) and the US Institute of Peace.

This article was originally published on The Arab Reform Initiative website

The Arab Reform Initiative was founded in 2005 by sixteen think tanks and research institutes from the Arab world, Europe and the United States. ARI is an independent research network with no ties to any specific country or any political agenda related to the region.