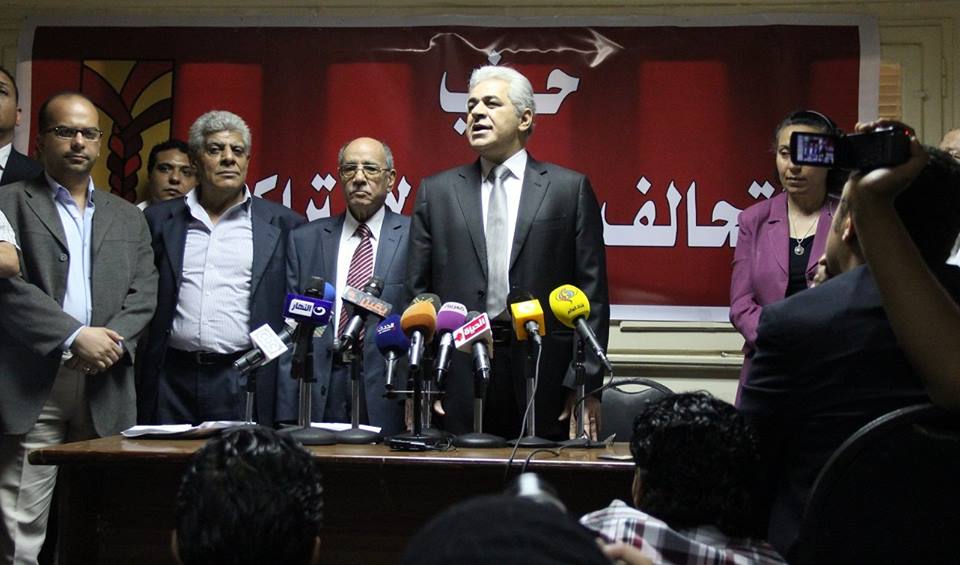 Sabahy thanked the party for their support and honoured its president Abdel Ghaffar Shokr as one of his mentors. Sabahy called on all the democratic, revolutionary and civil parties and movements to commit to continue the path of the revolution by supporting him.

“With our votes we can make our revolution succeed,” said Sabahy, who has been focusing his campaign on fighting the Mubarak regime’s policies, and promoting social justice and democracy to end poverty and corruption.

The socialist party is the second party to endorse Sabahy after liberal party,  Al-Dostour had officially announced its support to the leader of the Popular Current Party on 16 April and assisting with gathering signatures for the presidential hopeful.

On Friday, Sabahy met with representatives from the Al-Nour Party in his campaign headquarters to discuss his platform and the reasons behind his bid for presidency, according to his campaign.

Al-Sisi released his first official campaign video last Wednesday. He has not made any media statements since he resigned as minister of defence in March.

The SEC will announce the final candidates 2 May after reviewing the signatures presented by the presidential hopefuls.

As presidential candidates Hamdeen Sabahy and Abdel Fattah Al-Sisi continue to campaign, voters this week began registering to vote and the Supreme Electoral Commission granted 86 international and national organisations permits to monitor the political process leading up to next month’s election.Beginning Saturday until 10 May, voters can change the governorate where they will vote.

On 20 April the SEC granted six international organisations, including the Carter Center, the right to monitor the presidential elections, which are scheduled to take place outside Egypt from 15 until 18 May, while inside the country voters will cast their ballots on 26 and 27 May.

Some organisations were rejected because they were deemed to have insufficient resources to monitor 14,000 polling stations, Salman said, which the SEC worried would impact the reliability of their reports.

The Carter Center, a US-based human rights policy center founded by former US president Jimmy Carter, announced Thursday that it has deployed a team of electoral experts to assess the process surrounding the upcoming presidential elections in Egypt.

The observers will monitor electoral preparations, the involvement of civil society organisations in the pre-election process, and other political developments, according to an official statement.