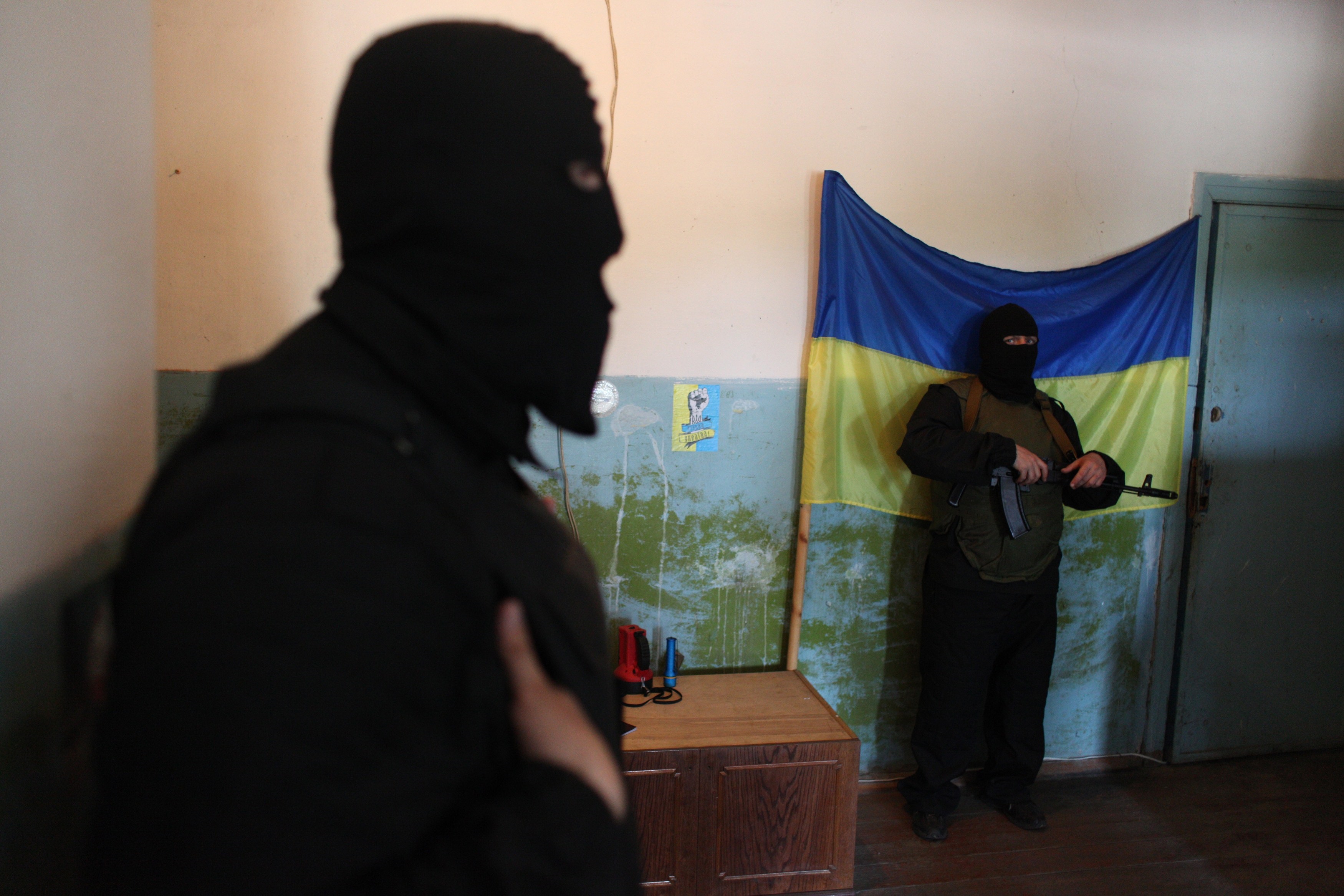 Reuters – Leaders of the Group of Seven major economies agreed to impose extra sanctions on Russia over its intervention in Ukraine, where armed pro-Moscow separatists detained a group of international observers and accused them of being NATO spies.

The United States said its part of the new punitive measures, which US officials said would target “cronies” of Russian President Vladimir Putin, could be unveiled as early as Monday unless Russia moved fast to defuse the Ukraine crisis.

In a joint statement, the G7 leaders said Russia had not taken any concrete steps to implement an accord, signed in Geneva, that was intended to rein in illegal armed groups.

“Instead, it has continued to escalate tensions by increasingly concerning rhetoric and ongoing threatening military manoeuvres on Ukraine’s border,” it said.

“We have now agreed that we will move swiftly to impose additional sanctions on Russia… We have committed to act urgently to intensify targeted sanctions and measures to increase the costs of Russia’s actions.”

But it added: “We underscore that the door remains open to a diplomatic resolution of this crisis.”

Russia denies it is to blame for the crisis in eastern Ukraine, where armed pro-Russian separatists have taken control of about a dozen officials buildings are defying the rule of the Western-backed government in the capital, Kiev.

The Kremlin argues that the crisis began when a new leadership took over in Kiev, in what Moscow calls a coup d’etat, and started persecuting the Russian-speaking community in the east for wanting closer ties with Russia.

The crisis has brought relations between Russia and the West to their lowest level since the Cold War, and is increasingly turning into a military stand-off.

Russia has massed troops and helicopters on the border with Ukraine where it says they are conducting exercises, while NATO has deployed extra forces in eastern Europe, saying they are needed to reassure its allies.

The international observers were being held in the eastern city of Slaviansk, a flashpoint between the Moscow-backed separatists who control the city, and Kiev’s forces who are trying to squeeze them out.

They were part of a German-led monitoring mission visiting the area under the aegis of the Organization for Security and Cooperation in Europe (OSCE), a Vienna-based body whose 57 member states include Russia.

The group was made up of eight observers, including nationals from Germany, Sweden, Denmark, Poland and the Czech Republic, along with several Ukrainian army officers who were accompanying them, the OSCE said.

On Saturday, the separatists invited journalists from Russian media into the building where the observers are being held, and showed military identification cards and military insignia they said were taken from the detainees.

That, the separatists said, was proof that they were not observers but were spying for NATO, according to reports in Russian media. It is standard practice for serving military officers to be seconded to OSCE missions.

“It is critical that we use all diplomatic channels to free this team immediately and unhurt,” German Defence Minister Ursula von der Leyen said.

Russia’s envoy to the OSCE said Moscow would take all steps to free the observers, Russian news agencies reported.

The G7 communique did not give details of what form the new sanctions would take, but they appeared to mark a significant ratcheting up of the visa bans and asset freezes already imposed on individuals and entities associated with the Kremlin.

“We believe that these sanctions will have a significant impact,” US Deputy National Security Advisor for Strategic Communication Ben Rhodes said.

Putin this week for the first time acknowledged that the sanctions were causing difficulties for Russia, though he said the impact was not “critical”.

The ratings agency Standard & Poor’s cut Russia’s sovereign long-term rating by one notch on Friday, effectively making it more expensive for Russia’s government to borrow money. That forced the central bank to raise its key interest rate to limit a fall in the value of the rouble.

Russian banks have been moving funds out of foreign accounts in anticipation of sanctions.

However, upping the pressure on Moscow carries risks for the West too, and for Europe especially, because it depends on Russia for about a quarter of its gas needs.

Russia has threatened to cut off Ukraine, which would have a knock-on effect on customers further west because many of the pipelines go through Ukrainian territory.

Officials from the European Union, Ukraine, and Ukraine’s EU neighbour Slovakia, met in Kiev on Saturday to discuss technical ways to reduce the impact of a cut-off.

US officials said the new sanctions on Russia will likely target individuals or companies with influence in specific sectors of the Russian economy such as energy and banking.

Sources familiar with the matter said the US list is expected to include “cronies” of Putin.

Meanwhile, the EU is expected to name 15 individuals to be placed under sanctions and would focus on those it considers responsible for the Ukraine unrest.

The sources said the one thing that might prevent the EU and the United States from moving ahead with the sanctions on Monday would be a sudden reversal of what they say are Russian-sponsored separatist movements in eastern Ukraine.

Ukraine sent in troops to try to dislodge the separatists for the first time on Thursday, killing up to five rebels around Slaviansk in what it said was a response to the kidnapping and torture of a politician found dead on Saturday.

Moscow said those actions violated the Geneva accord. Foreign Minister Sergei Lavrov accused authorities in Kiev of waging “war on their own people”.

“This is a bloody crime, and those who pushed the army to do that will pay, I am sure, and will face justice,” Lavrov said.

Russian forces on the border began military exercises on Thursday and Ukraine said they had approached to within 1km (0.6mile) of its border. It said it would treat any incursion as an invasion.

The Pentagon said that Russian aircraft had violated Ukraine’s border, without giving details. The Ukrainian defence ministry said it was unable to confirm it.

Ukrainian special forces launched a second phase of their operation on Friday by mounting a full blockade of Slaviansk, the rebels’ military stronghold, a presidential official said.

One of its military helicopters was hit by fire from a grenade launcher and exploded while on the ground at an airport near the city, the Defence Ministry said.

Pro-Western leaders in Kiev, who took power in February after Moscow-ally President Viktor Yanukovich fled following mass protests against him, say they fear Russia will try to take over eastern Ukraine.

Russian troops seized Ukraine’s Crimean peninsula on the Black Sea soon after Yanukovich left for Russia in February. Moscow denies interfering in eastern Ukraine, as it did in Crimea before admitting its forces had gone in.

Opinion: No stimulus, but G7 talks in Japan bear fruit