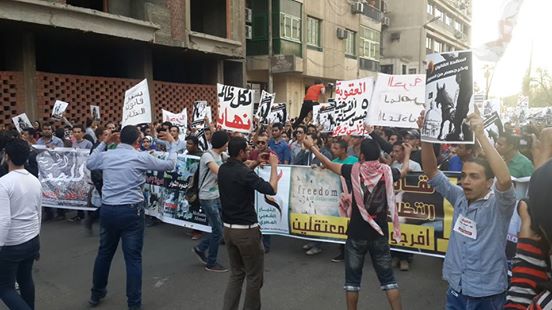 The Arab Network for Human Rights Information (ANHRI) condemned on Sunday the assault on Hassan Shahin, co-founder of the Tamarod movement, during a march that called for the elimination of the highly controversial Protest Law.

Protesters marched Saturday to the presidential palace in Heliopolis, calling for the release of detainees and bearing signs that read, “Bring down the protest law and release them”. The Al-Dostour and Misr Al-Qawia parties supported the march, in which protesters chanted against the military.

ANHRI said Shahin was assaulted outside the palace by protesters who “beat” him as he attempted to join them. They also slapped him and “accused him of treason for his political stances, which some view as biased towards the military institution,” the NGO said.

ANHRI considered the incident “a strong violation against freedom of expression”, adding: “It is as if the protesters are punishing him for his political positions, which they do not like, by violating his personal freedom to participate in protests that call for the release of detainees.”

Tamarod, which Shahin co-founded in 2013, is the petition movement that gathered signatures to oust former president Mohamed Morsi, eventually gaining vast momentum. Before becoming involved with Tamarod, Shahin was a journalist for Al-Badil private news website.

ANHRI renewed its calls on Egyptian authorities to drop the law, while calling on protesters to respect the rights of all people to demonstrate and express their positions. “Their protest was organised in the first place to oppose suppression of freedom of expression and to demand the release of detainees abused by the authorities for their political stances,” ANHRI said.

On 24 November, Interim President Adly Mansour issued the Protest Law, which was drafted by the Ministry of Justice and approved by the cabinet to regulate the right to peaceful assembly. It was issued despite extensive local and international criticism from a number of human rights groups, including Human Rights Watch and Amnesty International.

Many people have been arrested and tried under the legislation; most prominent among them are co-founders of the 6 April Youth Movement: Ahmed Maher, Mohamed Adel and blogger Ahmed Douma.

The trio was sentenced to three years in prison with hard labour and fined EGP 50,000 in December. On 7 April, a court upheld the conviction after a four-month long appeal process, making it a final verdict. The verdict and decision to uphold it have garnered widespread condemnation and criticism.