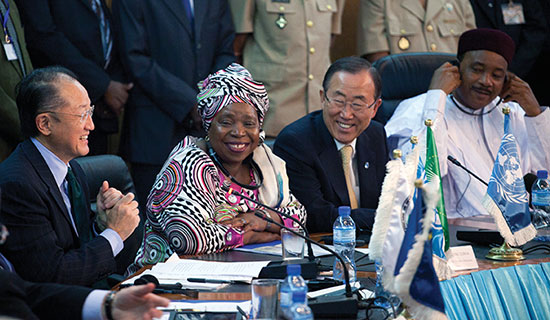 AFP- President Barack Obama said Monday he had no desire to contain or counter China despite clinching a defence pact with the Philippines which will inject US forces close to the volatile South China Sea.

In the Philippines on the final leg of an Asian tour, Obama directly addressed leaders in Beijing, telling them that maritime territorial disputes needed to be addressed peacefully, not with “intimidation or coercion”.

China’s claims to various islands, reefs and atolls in the South and East China Sea have been a constant theme of Obama’s tour of countries which fear being squeezed by the giant nation’s emergence as a regional superpower.

Obama faced a delicate task in Manila as he sought to reassure an ally concerned about an increasingly assertive China, but to avoid worsening tense Sino-US ties by antagonising leaders in Beijing.

“We welcome China’s peaceful rise. We have a constructive relationship with China,” Obama said at a press conference with Philippine President Benigno Aquino.

The US leader said that Washington did not take a position on the sovereignty of disputed territories variously claimed by China, Malaysia, Japan, the Philippines, Brunei and Vietnam.

But he said that, as an Asia-Pacific nation, the United States was interested in the freedom of navigation and the peaceful resolution of disputes.

“As a matter of international law and international norms, we don’t think coercion and intimidation is the way to manage these disputes.”

Obama strongly backed Aquino’s bid to take his country’s territorial disputes with China – including over the Second Thomas Shoal, an outpost in the Spratly Islands – to international arbitration – a step Beijing opposes.

The new defence pact is a framework agreement that will pave the way for more US troops and ships to rotate through the Philippines, and for the United States to place military hardware on Filipino bases.

Although there are already regular joint war games on Philippine soil and US naval visits, the agreement heralds a new era in defence ties between the longtime allies after the Philippines closed two of America’s biggest Asian bases in 1992.

Obama stressed that the pact would not result in new US bases in the Philippines but would expand US access to airfields and ports to allow forces from the two sides to train together – including for natural disasters.

The arrangement is similar to a deal with Australia to base up to 2,500 US Marines in the northern city of Darwin, a key plank in Obama’s pivot to Asia strategy which previously irked China.

China bristled at the new US-Philippines defence agreement. A dispatch carried by the official Xinhua news agency said the deal could “embolden Manila in dealing with Beijing”.

“The Aquino administration has made its intention clear: to confront China with US backing,” it said.

The agreement with the Philippines was signed by US ambassador to Manila Philip Goldberg and Philippine Defence Minister Voltaire Gazmin hours before Obama arrived in Manila.

It represents the most tangible achievement of Obama’s four-nation Asian tour, following the failure to conclude a market access agreement with Japan that represented another key facet of Obama’s Asia strategy.

While the US president has been concentrating on Asia for the last week, his attention has been repeatedly distracted by foreign policy crises elsewhere, including in Ukraine.

He announced at Monday’s press conference that the White House would unveil a new regime of sanctions against Russia later in the day, in coordination with Europe.

Later on Monday, Obama was due to be toasted at a state dinner Aquino, in the last major engagement of a week-long journey which also included stops in Japan, South Korea and Malaysia.

Opening his trip, Obama made clear that US defence treaties with Japan did cover disputed islands long administered by Tokyo in the East China Sea, which are known as the Senkakus in Japan and Diaoyus in China.

US officials have not been so specific over their obligations towards Manila regarding its territorial disputes – but it is clear they do not believe they are covered by a 1951 mutual defence pact.

The Philippines has accused China of becoming increasingly aggressive in staking its claims to the sea, and has called on the United States for greater military as well as diplomatic support.