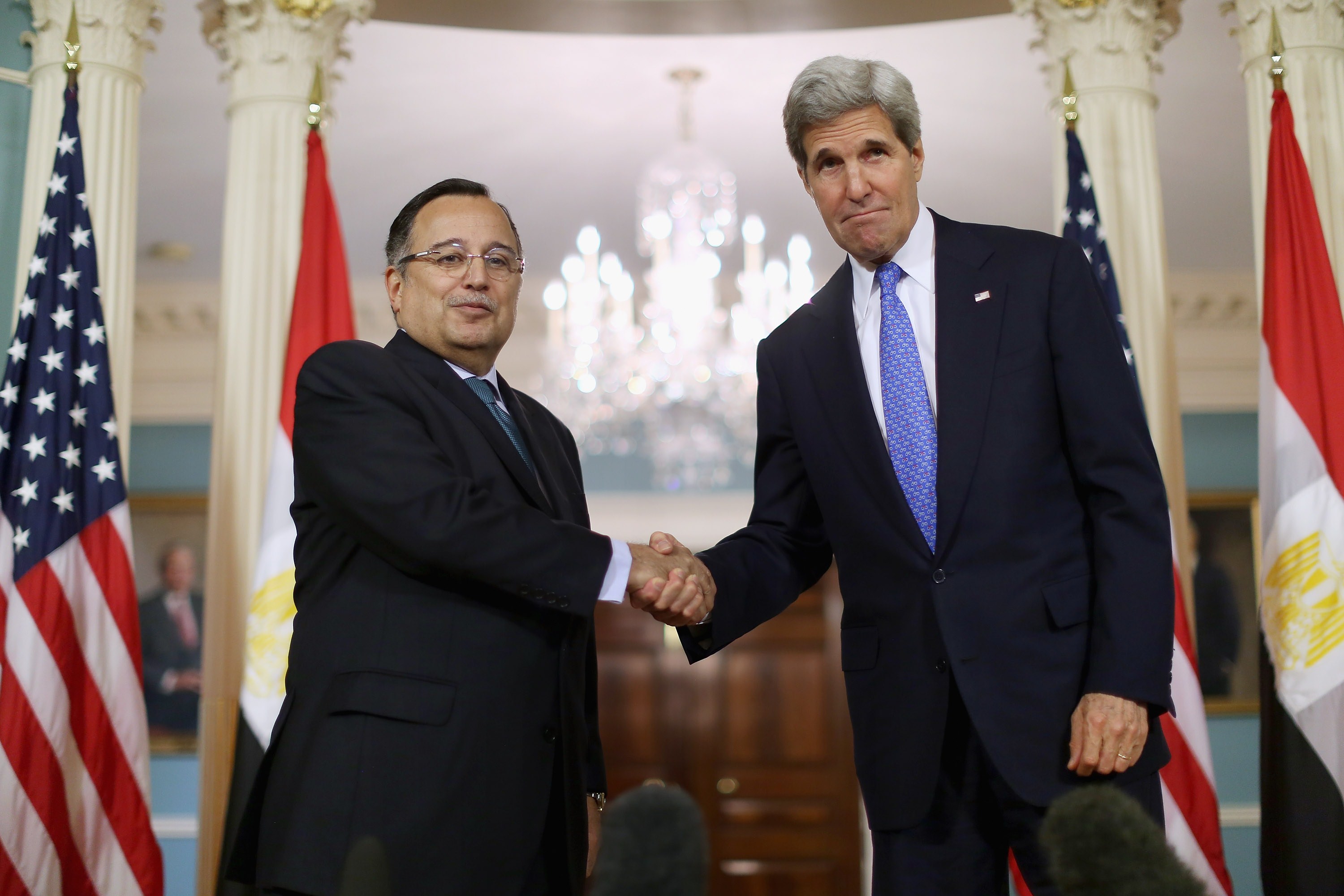 The foreign ministry stressed on Friday the importance of “equality and non-interference” in regards to Egypt’s relationship with the United States in the wake of Nabil Fahmy’s visit.

Fahmy and US Secretary of State John Kerry had a “full [and] frank” discussion “to confront the problems of the relationship” between Egypt and the US, according to a foreign ministry statement providing details of the minister’s US visit. The pair talked about the “need for a vision and different style in dealing with the outstanding issues to create the climate for a future relationship based on mutual respect and parity in the deal.”

Both the US and Egypt have acknowledged a strain in the “strategic relationship” since the ouster of former president Mohamed Morsi in July 2013. While the US has expressed its support for Egypt’s transitional roadmap, Washington has been critical of many of Egypt’s domestic issues, including political freedom, press freedom, judicial process, and human rights issues.

During his meetings with US officials, including Kerry, Defence Secretary Chuck Hagel, and President Barack Obama’s National Security Adviser Susan Rice, Fahmy explained “what has been achieved in the implementation of the roadmap”. He highlighted the passing of a new constitution in January, noting the inclusion of “an unprecedented guarantee of rights and freedoms” in the document.

Fahmy also conveyed “the real picture of the situation in Egypt” as well as explaining “the circumstances of the recent court rulings” and confirming the “independence of the Egyptian judiciary”. The State Department has condemned the mass death sentences handed down in Minya, as well as the banning of the 6 April Youth Movement last week.

The foreign minister also discussed American financial assistance to Egypt, which amounts to $1.6bn, the majority being military aid. It was “agreed to review the aid program and the means and methods of development, especially in the economic aspect and ensure its stability in the military and security sphere”.

The US suspended the delivery of military equipment to Egypt last October, which it said would resume pending democratic progress. The thaw in aid delivery began just days before Fahmy’s arrival in San Francisco last week, with the approval of 10 Apache helicopters intended to help Egypt’s army with combating an ongoing insurgency in the Sinai Peninsula. Kerry also informed Fahmy that he intends to certify to the US Congress that Egypt is “sustaining the strategic relationship with the United States,” and “upholding its obligations under the Egypt-Israel Peace Treaty.” Kerry added that he would not be able “to certify that Egypt is taking steps to support a democratic transition,” which is a condition necessary for the full resumption of aid delivery.

The ministry said that during the visit, the two sides agreed “to take advantage of the opportunities provided by US aid programmes to Egypt without trying to exploit them as tool for pressure.”

Egypt has received both military and humanitarian aid from the US since the signing of the peace treaty with Israel in 1979.

Fahmy also received assurances from the Washington officials “at the highest level that there are no conspiracies [against] Egypt and that the US is keen on the success of the democratisation process”.