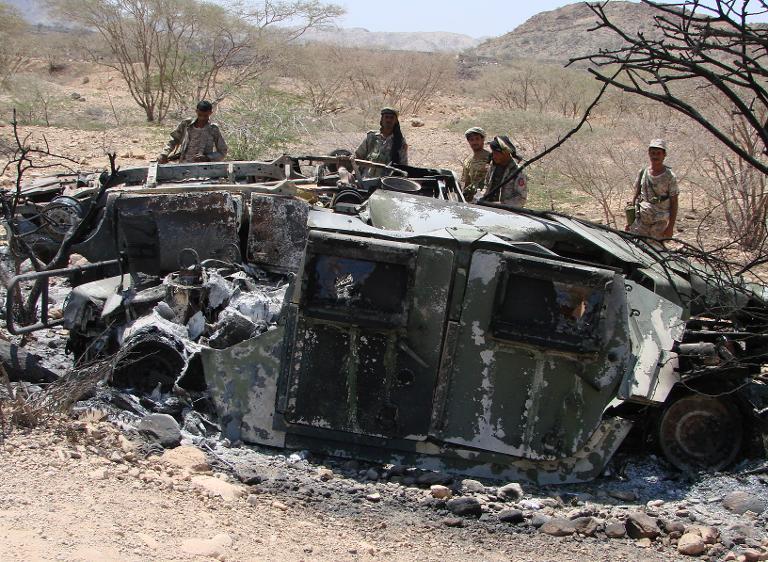 AFP – Yemen’s army killed 37 Al-Qaeda suspects and wounded dozens on Sunday on day six of a major offensive in the south of the country, the defence ministry said.

The “terrorists” were killed in the Maifaa region of Shabwa province during the ongoing operation against Al-Qaeda in the Arabian Peninsula (AQAP), the ministry said in text messages sent to journalists.

It described the operation as an “important” one, without elaborating.

Residents there told AFP on Sunday of “exceptionally” heavy artillery fire and air raids targeting Al-Qaeda hideouts in the region.

He said “the Al-Qaeda elements will not escape death” and troops will fight them “until they are uprooted from Yemen which cannot be a home for terrorism”.

Hours before Sunday’s raid, Saba reported that reinforcements had been sent to Shabwa to “deal with Al-Qaeda”.

The offensive began on Tuesday with a setback for the army when Al-Qaeda ambushed a convoy, killing 15 soldiers and taking 15 more prisoner, three of whom were later executed.

But it has since gathered pace, resulting in the deaths of 67 militants and more than 24 soldiers, according to an AFP tally based on official figures.

Among the Al-Qaeda fatalities were two foreign commanders — Abu Islam al-Shishani, who had Chechen links, and Abu Muslim al-Uzbeki, an AQAP leader in Abyan province who hailed from Uzbekistan.

AQAP — a merger of the network’s Yemeni and Saudi branches — has denied President Abdrabuh Mansur Hadi’s allegations that 70 percent of its fighters are foreigners.

Washington considers the Yemen-based AQAP to be the deadliest branch of Al-Qaeda’s global network.

The franchise has been linked to a number of failed terror plots against the United States, and its leader Nasser al-Wuhayshi recently appeared in a rare video in which he vowed to attack Western “crusaders” wherever they are.

The jihadists took advantage of a 2011 uprising that forced veteran strongman Ali Abdullah Saleh from power to seize large swathes of southern and eastern Yemen.

The army recaptured several major towns in 2012 but has struggled to reassert control in rural areas, despite the backing of militiamen recruited among local tribes.

The latest government campaign came 10 days after a wave of drone and other air attacks on Al-Qaeda bases and training camps killed around 70 militants.

The jihadist group denounced the offensive as a “premeditated military escalation” that came after “the Yemeni defence minister visited Washington to receive the orders of his American masters”.