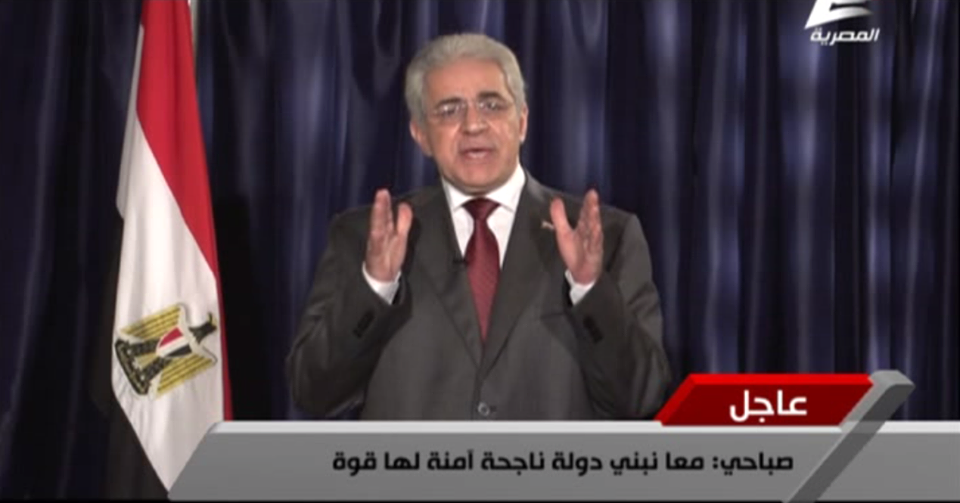 Presidential candidate Hamdeen Sabahy vowed to achieve social justice, dignity and national independence should he become Egypt’s next president, in his first national address on state television on Saturday.

Sabahy, who is competing against former defence minister Abdel Fattah Al-Sisi, launched his electoral campaign from the Upper Egyptian governorate of Assiut on Saturday.

In his address on state television, Sabahy stressed that Egypt needs “drastic change” in order to eradicate corruption. Corruption watchdog Transparency International had called on both candidates on Friday to “publicly commit to fighting corruption.”

“We have toppled two heads [of state] yet the same policies [we revolted against] remain,” Sabahy said. “We have made dear sacrifices, yet we still fail to get the good life we deserve.”

Sabahy called for a “war on poverty”, adding that Egypt is capable of fairly distributing its resources among all its citizens. He stressed that no Egyptian lands can be owned by foreigners. He added that Egyptians, both those residing in Egypt and abroad, will be a main source of funding major projects.

“We cannot aspire to change, to produce or to achieve social justice as long as the desperate, wretched phantom of terrorism remains chasing the people, their army and their police,” Sabahy said. He stated that terrorism can only be eradicated by applying social justice, as it is triggered by poverty and social problems.

The presidential candidate described Egypt as a “major country”, and vowed to restore its international position, and assure its place as part of the international human rights system. Sabahy promised to scrape the widely criticised Protest Law issued by Interim President Adly Mansour last November.

“I will replace it with a law which organises, rather than bans, protests,” Sabahy said. He also vowed to release all “prisoners of conscience”.

Addressing the armed forces, Sabahy described them as the “pillar of Egyptian and Arab security” and stressed that for the army to play its role it must not be “burdened with extra loads” or involved in political struggles.

Former military chief Al-Sisi is scheduled to have his first television interview on Monday with presenters Ibrahim Eissa and Lamis Al-Hadidy.

On Saturday, Al-Sisi’s campaign launched its official website and the candidate met with members of the media.

During the meeting, Al-Sisi described the armed forces as the state’s “true foundation” and “conscience”.

He stressed that the media is capable of raising awareness and shaping public opinion, adding that the media’s role in the current stage is central.

“The problem started when religious leaders of an extremist background surfaced with the attempt to rule Egypt,” Al-Sisi told media practitioners. “Their religious speech, isolated from reality, created a problem within the Egyptian society. I was raised in a neighbourhood void of any problems between Muslims and Copts … we now find ourselves part of a society where problems arise even among Muslims as a result of such extremist speech.”

The former defence minister said he had warned ousted President Mohamed Morsi that his Muslim Brotherhood would “transform the political disagreements into religious disagreements and a sacred war.”

“We need to be kind to one another,” Al-Sisi said. “We need to turn a new leaf and move forward with a different vision.”

Al-Sisi said that different media outlets are capable of reuniting Egyptians. He added that the peoples’ “awareness system” needs development to aid in the state’s advancement. The presidential candidate stressed the importance of communication between the media and state institutions in a manner which would allow for free flow of information.

Faced with “big challenges”, Al-Sisi described the Ministry of Interior’s handling of security issues as “very good” when compared to the “size of the challenges existing in society.”

On Sunday, the National Association for Change announced its “neutral” stance toward the coming presidential elections, adding that it is not endorsing a specific candidate.

Sabahy has won the support of groups including Al-Dostour Party, the Social Popular Alliance, the Revolutionary Socialists, and the Justice (Al-Adl) Party.

Al-Sisi is supported by a number of prominent politicians and public figures, Al-Wafd Party, and the Free Egyptians Party. On Saturday, the Salafi Al-Nour Party also announced its support for the former general.

In 2012, Sabahy finished in third place behind Morsi and former Mubarak-era Prime Minister Ahmed Shafiq. Al-Sisi, who was appointed Minister of Defence by Morsi in 2012, retired from the armed forces in March and announced he would compete in elections amid calls for him to run.