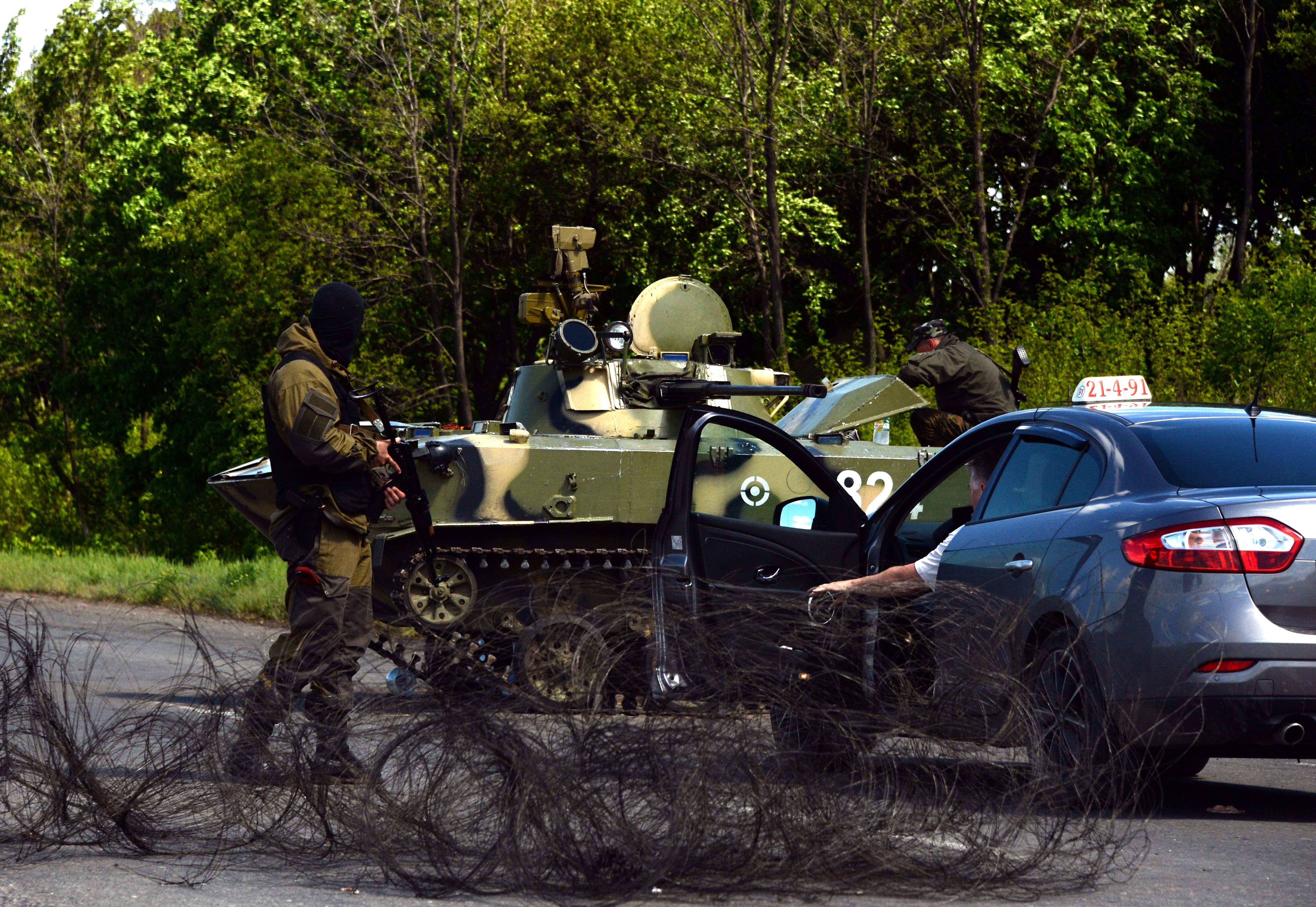 AFP – The death toll from a military offensive in a flashpoint town in east Ukraine rose to at least 34, officials said Tuesday, amid fresh warnings of civil war and the shutdown of a major airport in the region.

“Chaos and the risk of civil war” are now looming in Ukraine, said French President Francois Hollande, reflecting a frantic European push under way for a diplomatic solution before it is too late.

There are fears that Russian President Vladimir Putin could yet order an invasion into his ex-Soviet neighbour under the guise of a “peacekeeping” mission.

But the US general commanding NATO’s military operations, Philip Breedlove, said Russian special forces the West believes are already deployed covertly “may be able to accomplish his [Putin’s] objectives in eastern Ukraine” without the need to send in troops.

Kiev and its Western backers see Moscow’s main aims as making sure Ukraine’s east holds a planned “referendum” on Sunday calling for autonomy, and sabotaging all possibility of a nationwide presidential election two weeks later.

With those deadlines ticking closer, Ukraine’s authorities on Monday stepped up their offensive to crush rebels holed up in Slavyansk, a flashpoint town of more than 110,000 people that is the epicentre of the insurgency.

“Four of our fighters were killed and 20 were wounded” there in fierce fighting on Monday, Interior Minister Arsen Avakov said on his official Facebook page.

“According to our estimates over 30 terrorists were killed and dozens were wounded,” he said.

In a sign of how well-armed and trained the pro-Russian fighters are, on Monday they shot down a helicopter gunship near the town – their third since the assault on the town began last week.

An AFP reporter inside Slavyansk said fighting had not yet reached the centre of town, but basic foodstuffs and other items were running increasingly short. Locals hostile to Kiev’s government have strewn tree trunks and tyres across the streets to slow any army advance.

Ukraine’s interim president Oleksandr Turchynov, meanwhile, appointed his acting army chief permanently to the post. He has already put his armed forces on combat alert and brought back conscription in preparation for a possible Russian invasion.

He has said that Moscow’s meddling means “war is in effect being waged against us”.

Separately on Tuesday, all flights in and out of Donetsk – a regional industrial hub of more than one million people – were suspended, according to airport authorities, who gave no reason for the action.

Russia, which belatedly owned up to deploying its military to Crimea ahead of that region’s own hastily organised independence referendum, continues to deny its special forces are active in east Ukraine.

Instead it says the insurgency there is a spontaneous rejection of the Ukrainian government that came to power in February, after Kiev street protests forced out the pro-Kremlin president. And it accuses the Ukrainian authorities of “waging war on their own people”.

Russian state media, seen in east Ukraine, constantly refer to the new administration as being run by “fascists” who embrace a Nazi-style ideology.

That propaganda has struck a nerve in the southern port city of Odessa, where dozens of pro-Russian activists died in a horrific fire last Friday started during clashes with pro-Ukrainian militants, some of whom were ultranationalist extremists.

Funerals took place Tuesday for those killed in the violence.

The Nazi evocations will also likely come to the fore on Friday, when Ukraine – like Russia – observes a holiday commemorating the Soviet victory over wartime Germany.

Putin, according to Russian reports, could make a triumphant visit to annexed Crimea on that day, after overseeing a parade of Russian military might on the Red Square in Moscow.

With violence and divisions deepening, the West is pulling out all stops to avert open war.

The United States and the European Union are exerting some sanctions pressure on targeted individuals and firms in Russia.

Washington says they will be expanded to punishment of whole sectors of Russia’s slowing economy if Ukraine’s 25 May presidential election is prevented from taking place.

Moscow has said such a poll would be “absurd” given the spiralling violence.

“There would be chaos and the risk of civil war” if the vote does not take place, the French president said Tuesday in a joint television and radio interview.

“Pressure must be put [on Russia] by all of Europe and by the United States through sanctions,” Hollande told BFMTV and RMC radio.

Thirty foreign ministers – including from Russia and Ukraine – were discussing the escalating violence at a Council of Europe meeting in Vienna on Tuesday.

Russian Foreign Minister Sergei Lavrov and his Ukrainian counterpart were in the Austrian capital, along with Britain’s William Hague.

Hague was to travel later Tuesday to Kiev, where the Ukrainian parliament will discuss the crisis in a closed-door meeting.

“Russia seems to be intent on a course of preventing and disrupting those elections. That is wrong,” Hague told reporters in Vienna.

UN chief Ban Ki-moon has also offered to help mediate a solution before the crisis “spins out of control”.

In Washington, US Secretary of State John Kerry was to hold talks with EU foreign policy chief Catherine Ashton.

The chairman of the Organisation for Security and Cooperation in Europe, Didier Burkhalter, was due in Moscow on Wednesday.

Germany is pushing for a second peace conference in Geneva after Russia declared dead an initial agreement aimed at defusing the crisis on 17 April.

Russia warned in a foreign ministry report Monday that the unrest was now “fraught with such destructive consequences for Europe’s peace, stability and democratic development that it is absolutely necessary to prevent it”.