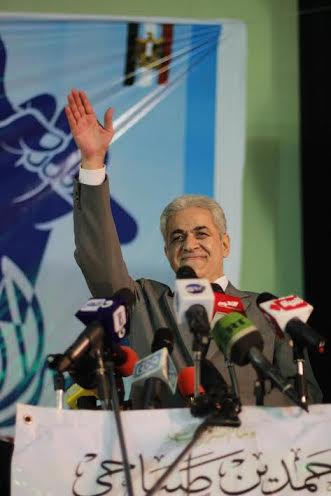 Sabahy, who is the only candidate running against the widely popular former Defence Minister Abdel Fattah Al-Sisi, has already garnered the support of several political movements and parties.

Misr Al-Hurreya, headed by former parliamentarian Amr Hamzawy, joined Sabahy’s campaign, adding that it would call upon its bases to contribute to the candidate’s platform. The party stated that they have conducted a vote which included over 50% of the party’s members, including two-thirds of the high board; the vote was in favour of taking part in the elections rather than boycotting.

The party stressed that none of the presidential candidates has a vision which “fully matches” its own. It nevertheless described Sabahy as the candidate whose goals are “the most similar” to the party’s as he “chose to put himself up to questioning regarding the resumption of revolutionary goals”.

“We hope that this positive contribution [in the elections] will help reinvent an organised front to achieve national and democratic goals,” the party said in a statement announcing its decision.

Misr Al-Hurreya Party stated once again that it had reservations on the presidential elections law governing the election. The law immunises the decisions of the Presidential Elections Commission (PEC), the body that will handle the elections, against legal challenges. The party said such immunity would raise doubts regarding the integrity and transparency of the elections.

Maasoum Marzouk, the official spokesman of Sabahy’s campaign, welcomed Misr Al-Hurreya’s support, adding that it “ensures that political movements are lining up again in support of… the revolutionary candidate.”

“This reflects that revolutionary movements are aware of the attempts to work around the 2011 revolution and its second wave on 30 June 2013,” Marzouk said. He expected more political movements and parties to follow through and announce their support for the Nasserist candidate.

Sabahy delivered a speech regarding his electoral platform in the industrial city of Mahalla in Gharbeya on Monday, with a particular focus on labour rights. The city counts as his second destination; he officially launched his campaign from the Upper Egyptian governorate of Assiut on Saturday.

Al-Sisi is meanwhile supported by a number of prominent politicians and public figures, including Al-Wafd Party, and the Free Egyptians Party. On Saturday, the Salafi Al-Nour Party also announced its support for the former general.