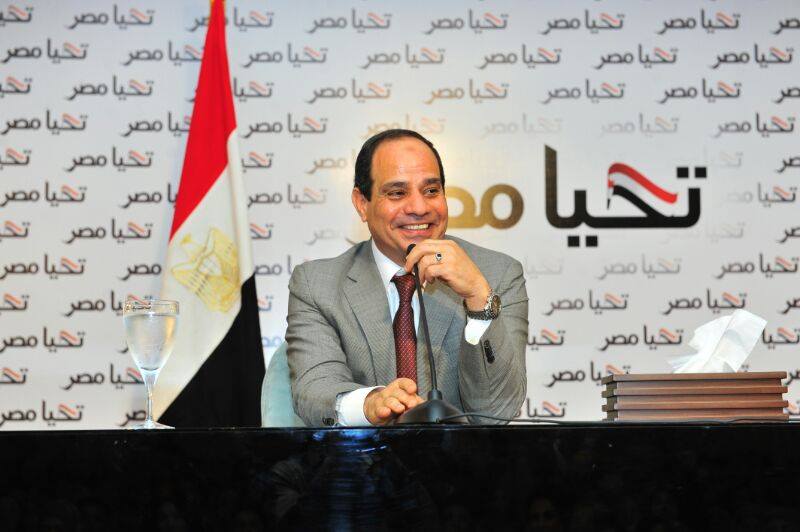 Resigned Field Marshal and presidential candidate Abdel Fattah Al-Sisi had on Monday his first televised interview since he was promoted to Commander in Chief of the Armed Forces by ousted President Mohamed Morsi in 2013.

The interview was the first of a two-episode interview aired jointly between privately-owned satellite channels CBC and ONtv.

The interviewers asked the former Field Marshal about his life growing up, family and background, as well as his platform and vision for the future.

Al-Sisi denied that he had consulted any groups inside or outside Egypt in running for the presidency, and had only notified the Supreme Council of the Armed Forces (SCAF) of his decision.

When asked whether he was the armed forces candidate, Al-Sisi interrupted his interviewer, saying: “I will not tolerate your usage of the word a’askar [military] again.” He added that he was not the presidential candidate of the military, since “the armed forces have never ruled Egypt”.

“A’askar” is the Arabic word for “military”, however, it has a negative connotations for its informality and use by  Egyptians when referring to the British occupation force. Post-2011 protesters have used this word to denounce what they have described as military rule under the leadership of SCAF.

When the presidential candidate was questioned regarding the newly proposed Terrorism Law,  he said he is willing to do “whatever it takes to restore security”.

Al-Sisi said that all the ministries in the cabinet called for the formation of the Protest Law. “Irresponsible protests will lead to the collapse of the state,” he said, and refused to answer a question on whether he was willing to grant amnesty to Protest Law detainees, if elected.

Al-Sisi claimed that he had warned the former president against granting amnesty to former militant elements. He also claimed that he was threatened by a prominent figure of the Muslim Brotherhood that “fighters would come to Egypt from different parts of the world” in the case that Morsi was ousted.

Al-Sisi announced that voting for him means that “there will be no place for the Muslim Brotherhood during his presidency”.

Al-Sisi said that he will use the expertise of Egyptian and international experts in the formulation of his presidential platform, including former NASA Scientist Dr Farouk Al-Baz. The presidential candidate added that he is willing to execute Al-Baz’s project, the Path of Development and Reconstruction, among others.

The second and final part of the interview will resume on Tuesday night.