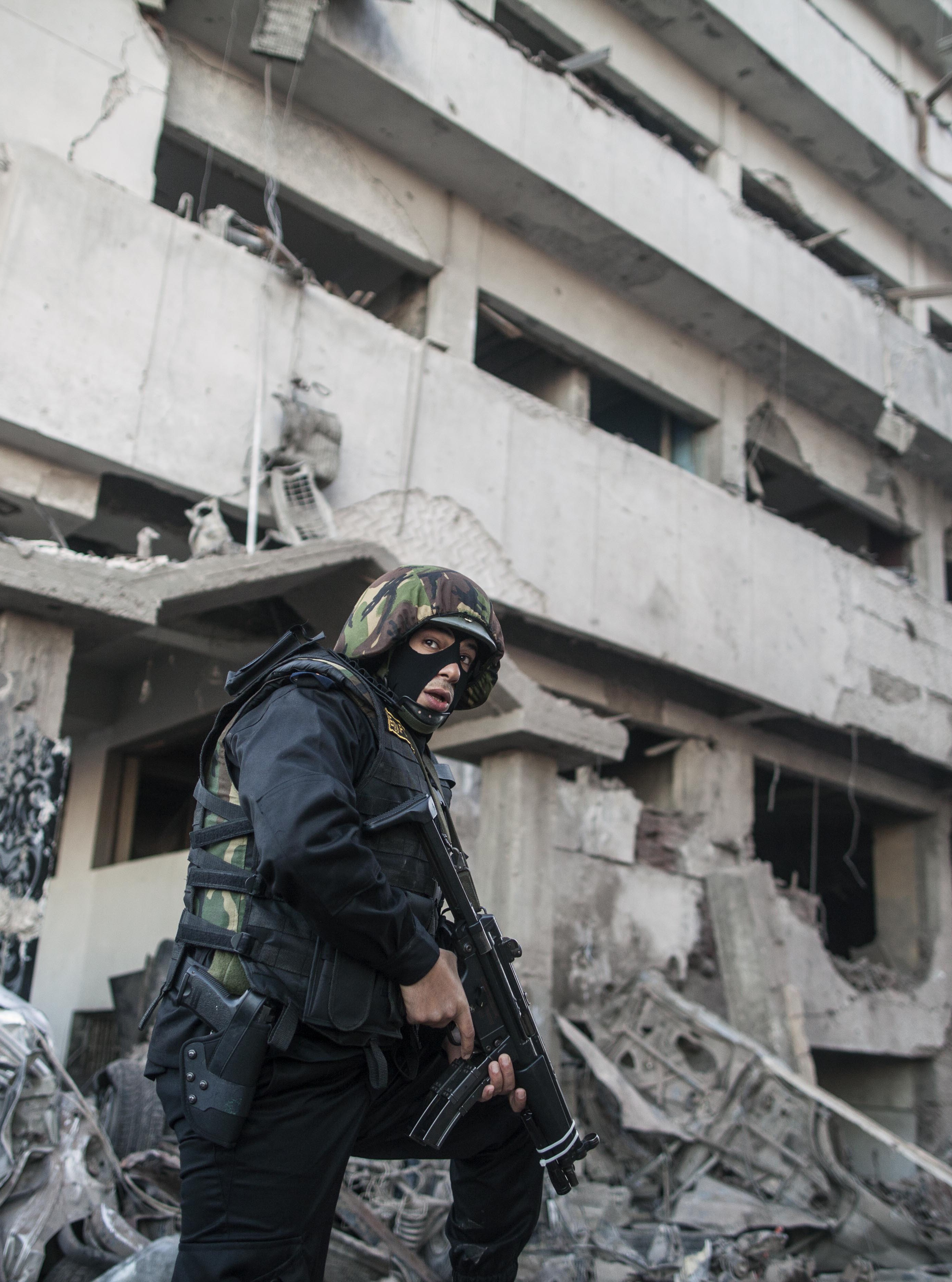 Prosecutor General Hisham Barakat ordered on Saturday the referral of 200 Ansar Beit Al-Maqdis members to trial, ordering the continued detention of 102 who are in custody and the arrest of 98 fugitives.

Prosecution charged them with a string of charges, including founding, leading and joining a terrorist organisation and “espionage with a foreign organisation, Hamas, the military wing of the Muslim Brotherhood”. They are also charged with murder, attempted murder and vandalising state facilities. Their trial date has yet to be set but the 60,000 pages worth of investigations which were carried out over months have been sent to court to set an urgent hearing.

Prosecution has linked the group, which was recently designated a terrorist organisation by an Egyptian court, with Muslim Brotherhood politician and former president Mohamed Morsi. “Investigations have led to astonishing results that ousted president Mohamed Morsi was in contact with leaders of the terrorist organisation Ansar Beit Al-Maqdis and they agreed that the group would refrain from committing any hostile operation throughout his tenure,” a statement by prosecution read.

The ouster of Morsi in July was followed by a surge in militancy across the country, particularly in the Sinai Peninsula. Founded in 2011, the militant group, which was also designated a terrorist organisation by the United States on 9 April, has claimed responsibility for a string of attacks throughout the past few months. Most recently, Ansar Beit Al-Maqdes claimed responsibility last week for two suicide bombings in Sinai that left three dead and eight injured. Typically, attacks have targeted security personnel and facilities.

Prosecution said investigations have revealed that the organisation and a group that sprung from it, the Forqan Brigades, are connected to Hamas, which rules the Gaza Strip. The statement said that Hamas has supplied the group with “money, weapons and explosive materials”.

This is not the first time Hamas is accused of involvement in strife in Egypt. The group is accused of complicity in two trials in which Morsi is a defendant, the prison break and espionage cases. The Palestinian group has been temporarily banned in Egypt by the Cairo Court for Urgent Matters in March, pending the results of the two trials.

Prosecution added that 60 of the defendants confessed during investigations that they have adopted “extremist ideals” such as “labelling the ruler as an infidel” and on overthrowing him.

According to the prosecution’s investigations, Ansar Beit Al-Maqdis was divided into several groups with different tasks, such as creating explosives and smuggling weapons inside the country and across the borders with Libya, Sudan and Gaza in return for keeping 10% of them.

The prosecution accused the group of committing 51 terrorist crimes, leaving 40 policemen and 15 civilians dead and 348 injured. These include: the attempted assassination of Minister of Interior Mohamed Ibrahim; the assassination of Homeland Security Officer Mohamed Mabrouk, the lead witness in the Wadi Al-Natrun case in which former President Mohamed Morsi is accused of spying for the Gaza Strip governing movement Hamas; the assassination of Mohamed Al-Saied, head of the Minister of Interior’s technical office, who was shot and killed by unknown militants; and the deadly bombings of the security directorates of Cairo, Daqahleya and South Sinai.

Ansar Beit Al-Maqdis has claimed responsibility for all of the above mentioned attacks in addition to others.

In October, Ansar Beit Al-Maqdis also claimed responsibility for an attack on the military intelligence building in Ismailia that injured six, claiming that they carried it out “to cleanse Egypt of crime and military foreign agents”. In January, it claimed responsibility for the downing of a military helicopter in Sinai, and in February, for the bombing of a tourist bus that killed four people in the Peninsula.

The list of attacks attributed to the group has reportedly caused public property damage estimated at EGP 247.5m and private property losses worth around EGP 28m.

Interim Prime Minister Ibrahim Mehleb’s cabinet recently amended articles in the Penal Code, and the Criminal Procedures Law to guarantee harsher punishments for crimes relating to terrorism. The amendments are yet to be ratified by the president before being implemented.