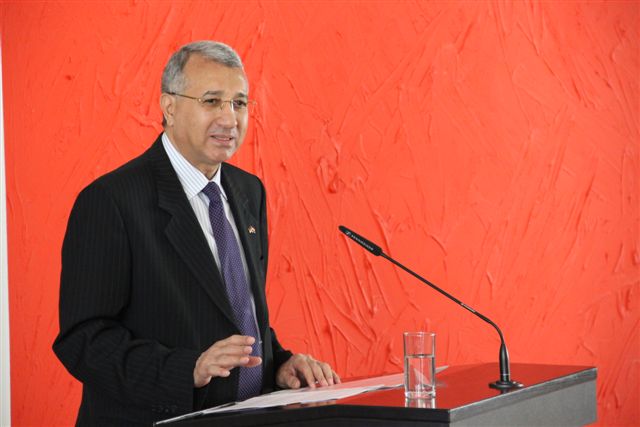 Ambassador Mohamed Higazy is attending to a number of portfolios, answering questions from German politicians, media and civil society pertaining to the latest political developments in Egypt. Additionally, he is endeavouring to revive tourism and attract investment in collaboration with the ministries in Cairo.

Daily News Egypt (DNE) met His Excellency at the Egyptian Embassy in Berlin where he answered a variety of current affairs’ queries and assured DNE that his strategy is open door to all media representatives to maintain trust and ensure accountability throughout his service in Germany.

Higazy initiated the talk by conveying to DNE some relieving news for all Egyptians and appreciators of Egypt’s heritage. On 30 April, he witnessed along with the German Minister of State at the Federal Foreign Office, Maria Böhmer, the handover of looted Egyptian antiquities that have been smuggled outside the country during the political maelstrom that took place in the past three years. The Egyptian artefacts have been confiscated by the customs officials in Germany and returned back to Egypt directly after their retrieval. The Egyptian Embassy in Berlin is pursuing further efforts to allocate and repossess other smuggled relics in accordance with the UNESCO’s 1970 Agreement on Prohibiting and Preventing the Illicit Import, Export and Transfer of Ownership of Cultural Property. Higazy appealed to all European countries which are signatories of this treaty to help Egypt in protecting its heritage and saving its priceless treasures for its people and the future generations.

With the Egyptian presidential elections are a few weeks away, DNE started the interview by focusing on this topic and then moved to other pertinent current affairs.

Q1: How is the embassy in Berlin preparing itself for the upcoming presidential election?

This is the second phase of the road map. Following the ratification of the new constitution last January, Egypt is now re-establishing its institutions to meet the demands and aspirations of the two-revolutions that took place in the past three years. The president of the republic will be elected next month in a fair and free election monitored by national and international observers to confirm its impartiality and integrity. The success of this democratic transformation manifested in the presidential election will corroborate the Egyptians determination and insistence on moving forward towards good governance and the rule-of-law. Meanwhile, it will basically move us a step further in achieving the two revolutions’ fundamental goals which are democracy, freedom and social justice.

That said, we have signed Memoranda of Understanding with the European Union, the African Union, the Common Market for Eastern and Southern Africa, and other international organizations to observe the presidential elections.

And in order to encourage all the Egyptians in Germany to show up in numbers during the election days, we have communicated with the Supreme Council of the Egyptian expatriates in Germany that includes 14-unions and organizations, to encourage their members to vote in this landmark democratic process.

Accordingly, the embassy in Berlin, along with the General Consulates in Frankfurt (for Egyptians in the south of Germany) and Hamburg (for the Egyptians in the north) are ready to host the presidential elections from 15-18 May at their premises with all measures and precautions to ensure the neutrality and candour of the democratic process. All requirements mandated by the Presidential Elections Commission (PEC) will be ensured and voting for Egyptian expatriates in Germany will be facilitated via voting with their electronic passports or national identification cards based on the National Election Registry (NER) approved by the PEC. All Egyptians registered in the NER are entitled to vote in our diplomatic premises. The embassy staff, including myself, will facilitate the election procedures for all our compatriots during the four-day period where the doors of the embassy and general consulates will be open for any person to witness the electoral processes.

Q2: How is the embassy alleviating the worries caused by the deteriorating security situation in Egypt which has negative consequences on the tourism industry?

As you know, Germany is the second most important source for tourists after Russia. We are in direct liaison with the German authorities to ease and remove restrictions on tourism. I would assure all tourists that in the past three years of continuous upheaval in Egypt, tourists were welcomed and protected by the hospitable Egyptians who are aware of the importance of the tourism industry to the economy and the employment of their sons and daughters. 142,000 Germans have visited Egypt in January and February 2014, and we are working on increasing the numbers of tourists in the coming months to reach the record 1.8 million German tourists who visited Egypt in 2010. The cabinet in Cairo is taking all measures to maintain the security and safety of all tourists. Therefore, Egypt has hosted German security-teams to evaluate the current situation on the ground. I guess their assessment was positive and we are expecting tourists to flock back to relish the wonders of our civilization, enjoy its perfect weather and savour its pristine nature.

Q3: What are the approaches that the embassy is pursuing to increase German investment in Egypt?

The volume of trade between Egypt and Germany in 2013 was about €4.5bn. This year, and according to January’s figures, there is a 27% increase in trade between the two-countries; specifically an increase in Egyptian exports and a decrease in imports. Thus, we are approaching a more balanced trade with Germany. The direct German investment in Egypt is €650m in a variety of fields, excluding the oil and gas industries which if added would increase the investment figure more than twofold. The latest developments in Egypt have significantly diverted our attention from attracting more investment to the country, given the political instability and dilapidating security. We are currently working based upon the directives of the Egyptian government to attract more German investment in the Egyptian economy which has proved its resilience and is expected to grow in the near future. I assure all investors that the variables and structures of our economy are tenacious and we are on our way towards economic growth and recovery after the upcoming elections. In all my meetings with German businessmen and industry leaders, I hear the same recurring affirmation, that Egypt doesn’t need promotion given its glimmering history, central location, rich resources and diversified economy that makes it attractive for all German investors in heavy industries, information-technology, automotives and other fields.

Recently, we have given more attention to renewable energy and education, particularly, vocational training in the technical and scientific fields.

Q4: What are the areas in which the embassy is focusing on to promote Egypt’s contemporary cultural legacies?

Given our rich history that has transcended civilizations, borders and languages, we are focusing on all aspects of Egyptian culture, whether our invaluable heritage and the contemporary manifestations of Egyptian ingenuity. That said, our cultural office has an annual program in which we host lectures on Egyptology, history, contemporary arts and literature. Last month, we hosted the renowned photographer Sherif Sonbol from Al-Ahram to showcase his latest work to the Germans for a month-and-half at the embassy’s premise. Also, three months ago, under my own aegis, the embassy hosted the globally acclaimed Light and Hope Orchestra, composed of young visually-impaired girls to play their classical music in Berlin and disseminate their peaceful message of hope and tolerance to the German audience. We are on regular bases hosting and organizing a variety of activities to project our contemporary heritage and well-represent our country.

Q5: How do you evaluate the current role of Al-Azhar as a beacon of moderate Islam in Europe and Germany, where there are increasing fears of radicalism and fundamentalism?

Al-Azhar as a modern minaret of theological knowledge among other facets of education, have carried over the centuries the central moderate message of Islam. The predominant message of Islam is tolerance, peace and coexistence, which Al-Azhar is disseminating through all its centres around the world. The scholars who graduate from Al-Azhar are renowned and respected by their counterparts where they once-and-again convey the central message of the religion without extremist ideologies and/or earthly ulterior motives.