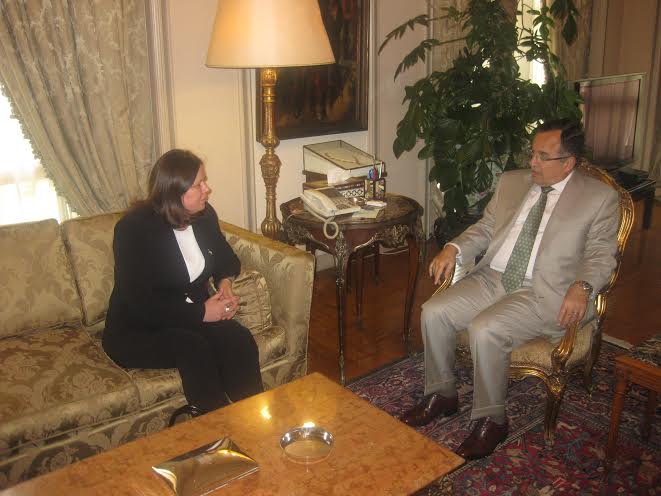 Egyptian Foreign Minister Nabil Fahmy met on Sunday with Fadwa Barghouthi, the wife of Palestinian prisoner and Fatah leader Marwan Barghouthi to discuss condition of Palestinians held in Israeli prisons, according to the foreign ministry.

The campaign addresses the international community, calling on them to pressure Israel to halt administrative detentions.

According to Addameer Prisoner Support and Human Rights Association, administrative detention allows Israeli forces to detain Palestinian suspects without charge. They are held on the basis of “secret information”, which is withheld from suspects and their lawyers, the association said. The prisoners are held indefinitely on a renewable, six-month basis.

The association has launched a campaign on 17 April calling for halting this “illegal measure”, the release of Palestinian political detainees, and raising awareness regarding human rights violations and reported cases of the torture of prisoners, including children, which violates international conventions.

The association mentioned in a report on 7 May 2014 that the number of Palestinians that are currently under administrative detention reached 183, 9 of whom are members of the Palestinian Legislative Council.

A large scale wave of open hunger strikes among Palestinian prisoners will reach 18 days on Sunday.

Marwan Barghouthi was arrested in 2002 and was convicted of murder in 2004 by an Israeli court. He was sentenced to five life sentences, although he has denied allegations of targeting civilians and refused to defend himself in front of what he considered an “illegitimate court”.

Barghouthi founded Al-Aqsa Battalion and led an armed resistance against the “Israeli occupation forces” during the First Intifada (1987-1993) and the Second Intifada, which began in 2000.