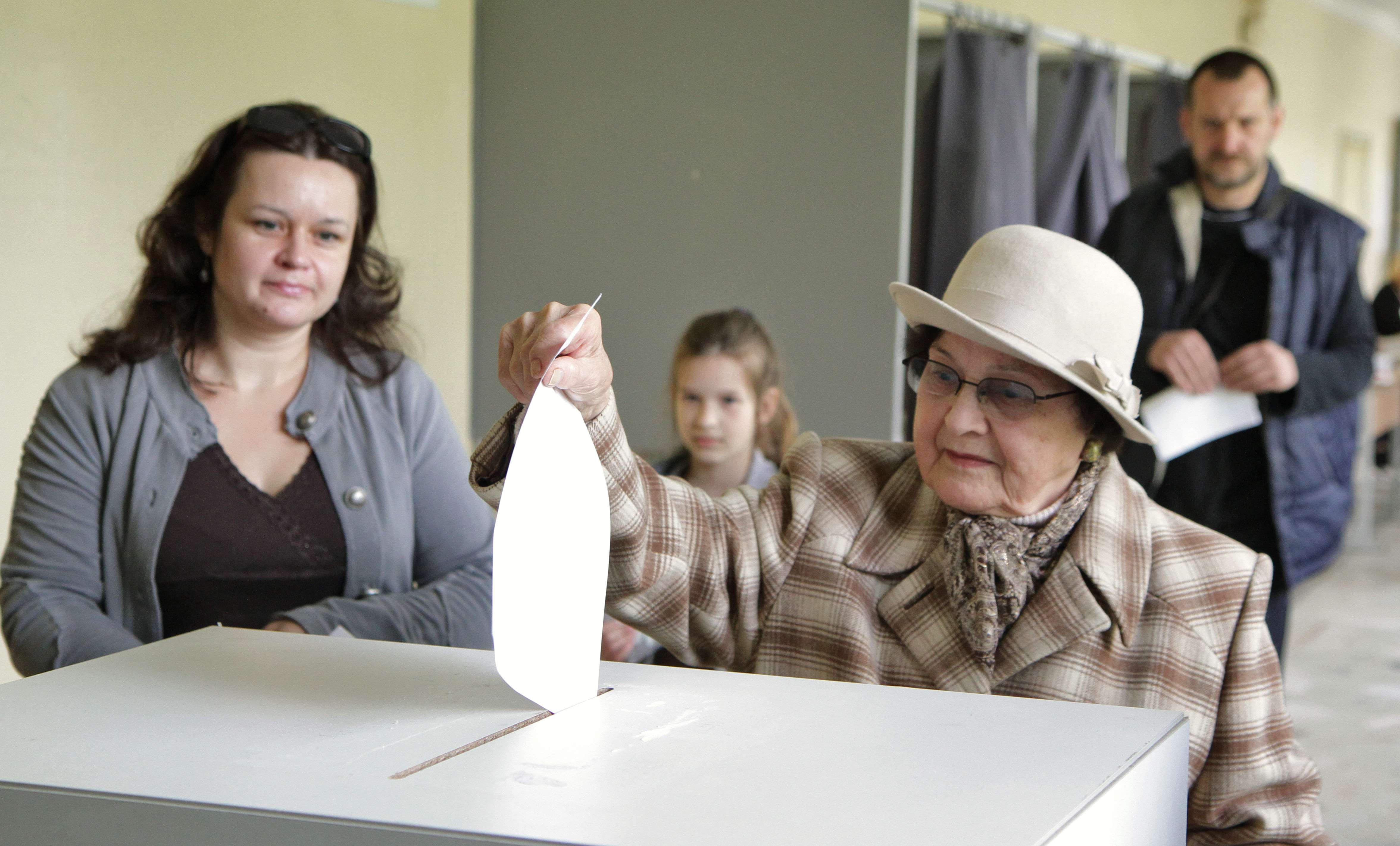 AFP – Lithuanians were voting Sunday to elect their president, with incumbent “Iron Lady” Dalia Grybauskaite the favourite to win for her hard line on a resurgent Russia during the Ukraine crisis.

Grybauskaite is poised to win a second term as many here who remember Soviet times see her as a their best hope amid Europe’s worst standoff with Moscow since the Cold War.

A former EU budget chief, the 58-year-old Grybauskaite is likely to score over 50% of the vote, recent opinion surveys showed, but low turnout could trigger a 25 May run-off in this NATO member country.

Six other candidates have all polled around 10% and are not regarded as serious rivals.

“If turnout exceeds 50%, she has quite a good chance of scoring a first round victory,” Ramunas Vilpisauskas, a political scientist at Vilnius University, told AFP.

A candidate must win half of the votes cast with a turnout of at least 50% to win in round one.

Grybauskaite, who has a black belt in karate and is nicknamed the “Iron Lady” for her Thatcheresque resolve, scored a resounding first round victory in 2009.

Turnout in the first three hours of voting Sunday tallied at over 7% of the country’s 2.5 million registered voters, more than in 2009, election officials said.

This vote comes as Russia’s annexation of Ukraine’s former Crimean peninsula and sabre rattling in the neighbouring Russian exclave of Kaliningrad have sparked deep seated fears in Lithuania, a country of three million.

Elvyra Vaicaityte, a student living a stone’s throw from Kaliningrad, is spooked by rumblings of military might in the Russian exclave, sandwiched between Lithuania and fellow NATO member Poland.

“I can hear explosions during exercises, and windows often rattle – I don’t feel very secure,” the 23-year-old told AFP in the border town of Vilkaviskis.

Grybauskaite first urged and then welcomed the arrival of American troops last month as NATO stepped up its presence in the Baltic states, which spent five decades under Soviet occupation until 1991.

Lithuania along with Baltic minnows Latvia and Estonia all are keen to see more alliance “boots on the ground” amid the Ukraine crisis.

Days ahead of the vote, Grybauskaite vowed to “take a gun myself to defend the country if that’s what’s needed for national security”.

“The Lithuania of tomorrow depends on the decision every Lithuanian citizen makes today,” she said Sunday as she cast her ballot in the capital.

“Russia has always been a threat. I was deported to Siberia at the age of eight and spent 14 years there,” Professor Pranas Baltrenas told AFP in sunny Vilnius after he and his wife voted for Grybauskaite.

“We saw a period of thaw after regaining independence, but now we’re seeing provocations again. We must react to the current situation, and I think Grybauskaite’s reaction is appropriate,” he said.

She also sees eurozone entry in 2015 as an economic buffer against Moscow.

In contrast to her firm line, Grybauskaite’s centre-left and populist rivals insist dialogue with Russia is crucial, and have focused more on social issues.

“We’ll have to seek dialogue with Russia. Any kind of peace is better than a war,” Social Democrat Zigmantas Balcytis said.

Balcytis, a member of the European Parliament, and populist Labour party MP Arturas Paulauskas are her most likely rivals in a possible run-off.

Professor Algis Krupavicius, a lecturer in Lithuania’s second city of Kaunas, insists the impact of the Ukraine crisis on Sunday’s vote should not be underestimated.

“The Ukraine crisis is an important mobilising factor, and Grybauskaite’s stern rhetoric is likely to appeal to centre-right voters,” he told AFP.

Voting began Sunday at 0400 GMT and was due to end at 1700 GMT with no exit polls scheduled.