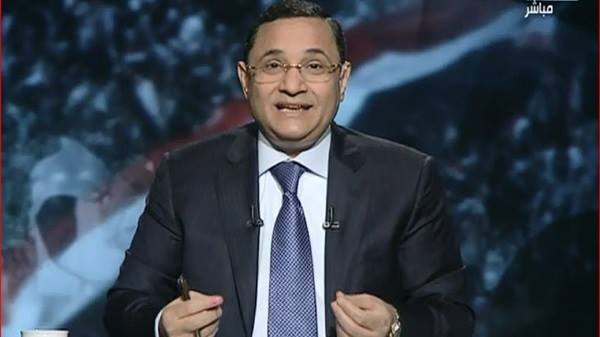 Two prominent activists whose phone calls were featured on Ali’s television show on Al-Qahera Wal-Nas satellite channel, the “Black Box”, have filed lawsuits accusing the presenter of libel. Ali was acquitted of both charges, and the plaintiffs, former parliamentarian Mustafa Al-Naggar and poet Abdulrahman Yusuf, were ordered by the court to pay EGP 50 each worth of lawyers’ fees.

Al-Naggar and Yusuf had accused Ali of defaming them through broadcasting their personal phone calls without their permission.

In a phone interview on private-owned satellite channel CBC, Ali described the verdict on Saturday as “historic”.

“This verdict ensures the journalist’s right to publish any piece of information in any form as soon as he receives it,” Ali said.

Ali told CBC channel that the judge acquitted him since there is no evidence incriminating him in leaking the phone calls. He added that those who recorded the phone calls without the plaintiffs’ permission are the ones who should be held accountable.

“We did not record those phone calls, [nor] do we know who recorded them and whether they have any legal basis to support their actions,” Ali said. “We just received those leaks and aired them.”

Emad Mubarak, lawyer and director of the Association for Freedom of Thought and Expression, said that legally speaking, both the person who recorded the phone calls and the person who made them public should be held accountable.

“Those leaks were either recorded by a security apparatus or a company,” Mubarak said. “In either case, an investigation must be held to look into the leaks.”

Mubarak referred to Article 57 of the 2014 Constitution, which addresses the sacredness of privacy. The article states that mail correspondence, phone calls and other forms of communication are sacred, adding that they cannot be censored or confiscated without a judicial order and for a given period of time.

Ali claims he possesses several phone call recordings between the activists and foreign and domestic individuals which would incriminate the former.

A group of human rights organisations condemned the alleged leaks Ali aired during his show in a joint statement released in January. The rights groups filed a complaint to the prosecutor general’s office, demanding that mobile service providers Vodafone and Etisalat be referred to investigation to “to determine whether [they] conspired to record and leak these conversations”.

In January, Prosecutor General Hisham Barakat opened an investigation into a report filed against eight political activists accusing them of raiding State Security buildings in 2011 and stealing official documents. The activists referred to investigation included Al-Naggar and Yusuf, and the charges pressed against them were based on the alleged phone calls Ali had aired.

In a statement released shortly after his phone calls were aired, Al-Naggar said the telephone conversations were released for the purpose of “character assassination” and driven by “political revenge against opponents”. The former parliamentarian held the state responsible for the leaks.

On 10 April, the North Cairo Misdemeanour Military Court acquitted one Rassd News Network journalist and sentenced another to prison for “attempting to harm the armed forces”. Amr Salama, who was acquitted, and Islam Al-Homsi were accused of illegally obtaining and publishing classified military documents and videos, including interviews with former Defence Minister Abdel Fattah Al-Sisi. Al-Homsi was sentenced to one year in prison whereas two other RNN employees were sentenced in absentia to three years in prison. A conscript was also sentenced to three years in prison for “revealing military secrets”.