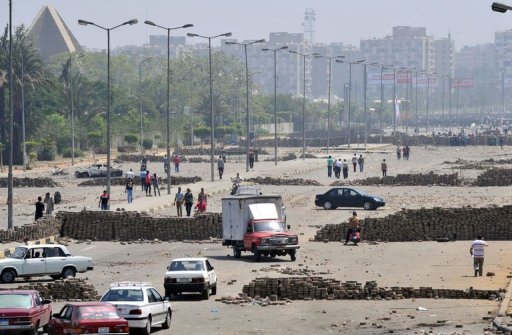 The Banha Criminal Court sentenced on Saturday seven defendants to life in prison for blocking the ring road on 14 August, after the forcible dispersal of two pro-Mohamed Morsi encampments in Greater Cairo.

The public prosecution referred the seven defendants to trial in March. They were charged with: injuring civilians, joining a banned organisation (in reference to the Muslim Brotherhood), illegal assembly, “thuggery”, vandalism, blocking roads and possession of weapons, the prosecution reported.

The defendants blocked the ring road with burning tyres, shot passersby with firearms, vandalised a security checkpoint on the road and incited violence against the police and armed forces, the public prosecution said in a statement.

Violent clashes occurred around Egypt in August following the forcible dispersal of two large sit-ins calling for the reinstatement of ousted President Morsi; the Rabaa Al-Adaweya and Al-Nahda sit-ins. Rights groups estimated that almost 1,500 people were arrested following the dispersals.

The Forensics Authority estimated the death toll from the Rabaa sit-in dispersal to be at 627, while a report produced by the National Council for Human Rights on the dispersal put it at 632. Wiki Thawra, an independent website dedicated to documenting the revolution, had reported a higher number, 969, for the Rabaa dispersal.