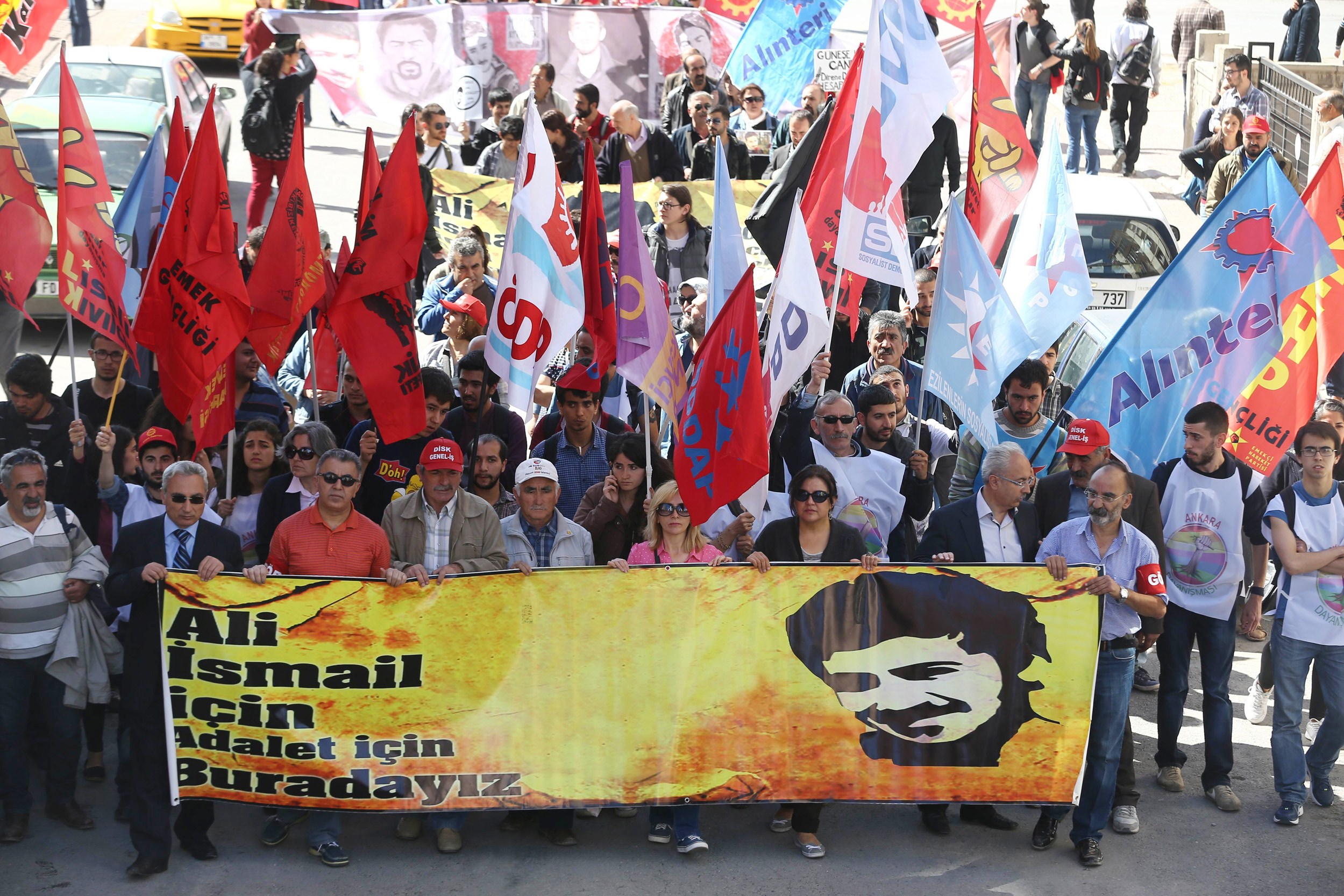 Ali Ismail Korkmaz died after being pummelled with baseball bats and truncheons in the western city of Eskisehir on 2 June – one of eight people to perish in the three weeks of protests that convulsed the country of 76 million.

“I saw Ali Ismail being kicked on his back and head again and again,” Semih Berkay Yapici, a witness who was on the scene, told the court.

“He lost his balance, fell on the ground, hit his head on a stone and lost consciousness. His eyes were closed,” he added.

Yapici said once Korkmaz regained consciousness he was again kicked on the head and as he fled his attackers, was set upon by plain-clothes policemen with gas masks who ruthlessly kicked and beat him on the legs.

“He then took a turn and went out of my sight… his face is etched into my memory,” he said.

Yapici identified the police suspects – who attended the proceedings in handcuffs – from mug shots.

Around 1,000 protesters gathered outside the courthouse in Kayseri despite tight security measures. Riot police were on standby, and major roads were closed to traffic.

“Ali’s murderer is the AKP police”, they chanted, referring to the ruling Justice and Development Party (AKP). “Young people will take over and the AKP will go.”

Some carried portraits of Korkmaz.

Many of the protesters were young people who had taken part in last year’s street demonstrations.

“Pressure will awaken the people,” he said.

“But I don’t trust the judiciary. The AKP will free the murderers.”

The attack on Korkmaz was recorded by security cameras and the 19-year-old, wearing a “World Peace” T-shirt, suffered a brain haemorrhage and died after 38 days in a coma.

Eight men, including four policemen, are accused of premeditated murder and face up to life in prison if convicted.

The officers have denied beating Korkmaz to death.

But an expert report analysing mobile phone signals and published in local media this month suggested the suspects may have been in the same area as Korkmaz on the day of the incident.

“We are demanding the immediate arrest of the suspects pending trial,” he added.

An estimated 2.5 million people took to the streets across Turkey over three weeks last June to demand Prime Minister Recep Tayyip Erdogan’s resignation. More than 8,000 people were injured, according to medics.

The death of 15-year-old Berkin Elvan after 269 days in a coma in March brought the toll from the unrest to at least eight, including one policeman.

Elvan’s father Sami sought on Monday to join the case against the police but the court rejected his request.

The demonstrations last June marked the biggest challenge to Erdogan’s rule since his AKP party came to power in 2002.

The 60-year-old leader scored a crushing victory in 30 March local elections despite corruption allegations targeting him and his inner circle.

His handling of the graft scandal, and also of last year’s unrest, have dented his popularity however and the Turkish strongman is now tipped to run for the largely ceremonial post of president in August.