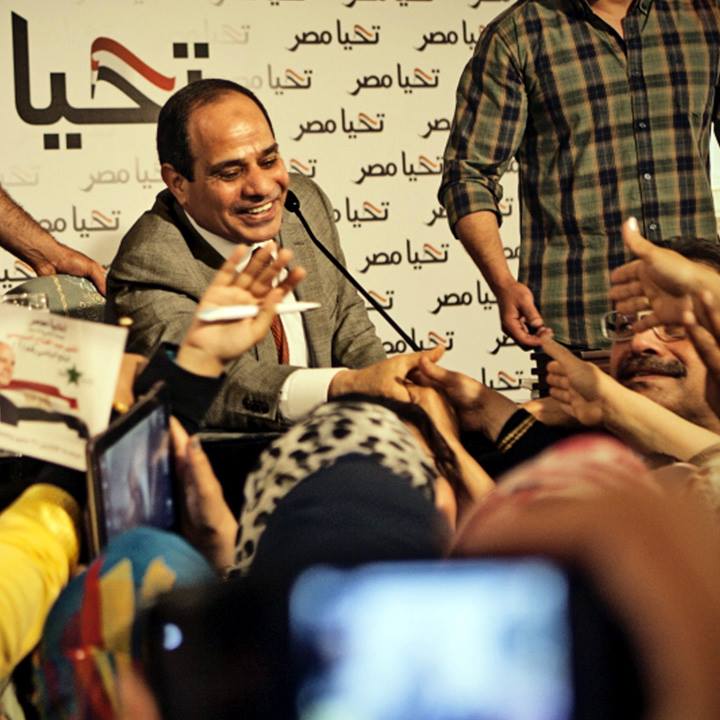 Al-Sisi already has the endorsements of the Salafi Al-Nour Party, Al-Wafd Party and the Free Egyptians Party.

Meanwhile, Nasserist politician Hamdeen Sabahy is scheduled to visit the governorate of Sharqeya, where he will hold a conference Tuesday afternoon. He has already held rallies in Banha city in Qaliubiya governorate, Damanhour and Kafr Al-Dawar cities in Beheira governorate and in the industrial city of Mahalla in Gharbeya governorate, where he delivered a speech regarding his electoral platform.

The first round of upcoming presidential elections will take place on 26 and 27 May, with Al-Sisi and Sabahy being the only two candidates.

On Monday, the 10th day of campaigning, both Al-Sisi and Sabahy addressed their constituents using Skype conference calls. Sabahy spoke to Egyptians abroad and Al-Sisi addressed voters in Assiut, where Sabahy had officially launched his campaign.

Al-Sisi called on Assiut voters to participate in the upcoming presidential elections. Al-Sisi spoke to people in the Upper Egypt governorate to “explain his vision for the future of Egypt in the upcoming phase and the dimensions of his ambitious development plan which is targeted by his platform,” a statement by his campaign said.

He added that Upper Egypt did not have a chance for real development in the past few years, and said: “God willing you will see significant expansion in Upper Egypt governorates.”

Sabahy, meanwhile, spoke with Egyptian expatriate communities in the United States, Canada, Australia, the Gulf and Europe, before Egyptians living abroad are scheduled to vote.

Expatriates are scheduled to vote from 15 to 18 May. Before his conference call, Sabahy had asserted in a video message to voters abroad that he intends on setting up a ministry for citizens abroad as well as legal centres inside embassies to protect their “rights and dignity”.

Sabahy also has his share of political party endorsements, with at least six political parties supporting the Nasserist politician. They include: Al-Dostour Party, Al-Tayar Al-Sha’aby (the Popular Current), the Justice Party, Al-Karama Party, the Social Popular Alliance Party (SPAP) and the Revolutionary Socialists.

Campaigning officially begun on Saturday, 3 May and the results of the first round of elections are slated to be announced on 5 June. With only two candidates competing for the post, there will be no need for a second round.