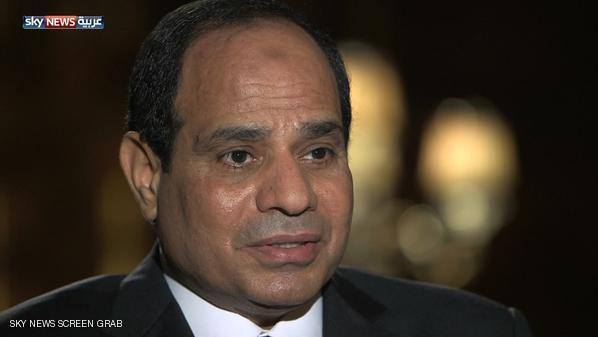 Presidential candidate Abdel Fattah Al-Sisi discussed Monday the future of Egyptian forces in Sinai, saying that “peace [with Israel] is now stable” and that “our neighbours” understand that the presence of the forces in Sinai prevents the region from becoming a base for militancy against Egypt and its neighbours.

In the second part of his interview on Abu Dhabi based news channel Sky News Arabia, Al-Sisi discussed his proposed policy on terrorism and Egypt’s foreign relations if elected president. He also called for Arab unity.

When asked about amending the peace treaty with Israel, Al-Sisi said: “We do what we want in Sinai,” adding that he believes Israel would likely be open to amending the Camp David Accords.

“We are not against anyone, we are only against any threat to Egypt’s national security,” he said.

The presidential candidate said that Sinai had turned into a “hub for terrorism” since 2011 and the attacks that were made on police stations and security personnel. He added that during former president Mohamed Morsi’s year in office, the political atmosphere had been appealing to jihadists, especially after Morsi had granted amnesty to a number of extremist figures.

“The [Brotherhood] have created an environment for terrorism in Egypt,” said Al-Sisi.

The former defence minister stressed the need for economic development in Sinai to address the instability there. “The problem with Sinai is not just political, it is also economic and ideological,” he said. “We have a plan to develop Sinai, the Suez Canal corridor, Upper Egypt and other parts of the country, because this is a means of creating immunity from terrorism.”

Al-Sisi expressed the need for Egypt to play a regional security role. “Egypt is keen on Arab regional security, just as we are keen on Egyptian national security,” he said, calling the Arab League a positive means of achieving this, but one that needs to be enforced and validated.

Al-Sisi called for Arab unity to protect the region’s interests and not to “intimidate other nations”, but said Egyptian army is “willing to interfere in case of any threat to any Arab country”.

“Now there is an opportunity for real peace between the Palestinians and the Israelis,” he said. “All sides should seize it.”

Regarding Qatari-Egyptian relations, Al-Sisi asserted: “Egypt did not start any disagreement with any country,” but added: “No one will interfere in Egypt’s affairs anymore.”

Al-Sisi went on to deny that tensions with Turkey were based on the latter’s regional dominance. “Our problems are much bigger than this,” he said.

Relations with Iran, meanwhile, are dependent on Arab regional security – specifically that of Gulf countries, he said.

Speaking on Ethiopia, with which Egypt has had tensions over the former’s construction of a major dam project on the Nile, the candidate said the Egyptian people would be willing to assist in its economic development and aspirations, but qualified that this interest must be reciprocated.

He meanwhile called the country’s neighbours, Libya and Sudan, “strategic” to Egypt. “Even before 30 June, we have been securing our borders from the Libyan side and we understand the situation and how unstable it is.”

Addressing the world’s current political camps, Al-Sisi said that international relations now have passed the duality of the cold war and Egypt is willing to have relations “with all countries”.