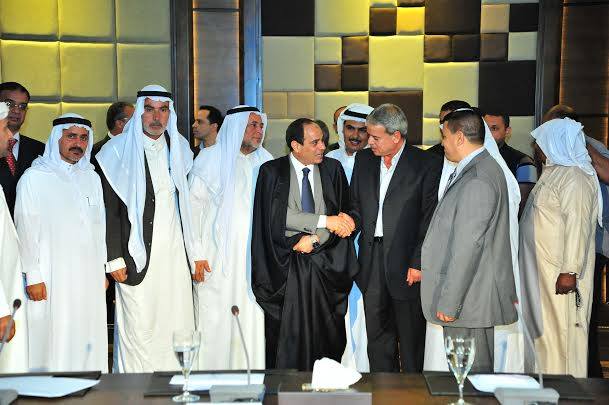 Nasserist politician Hamdeen Sabahy said the “army… must not rule” in a rally in Sharqeya Tuesday, day 11 of campaigning, while former Defence Minister Abdel Fattah Al-Sisi met with a delegation of Sinai representatives.

Sabahy said: “The army must protect and safeguard freedom, security and the country,” a statement by his campaign read. The founder of Al-Tayar Al-Sha’aby (Popular Current) said: “Our trust is in the people and that the path that the people started on 25 January and continued on 30 June will enable the revolution to rule.”

On the controversial and heavily criticised Protest Law, Sabahy said that there will be no “prisoner of conscience” during his reign and called for the freedom of all revolutionary youth.

Sabahy has been actively campaigning outside the capital and he officially launched his presidential campaign in the Upper Egypt governorate of Assiut. So far, he has held rallies in Banha city in Qaliubiya governorate, Damanhour and Kafr Al-Dawar cities in Beheira governorate and in the industrial city of Mahalla in Gharbeya governorate, where he delivered a speech regarding his electoral platform.

Meanwhile, during his meeting with youth and tribal representatives from Sinai, Al-Sisi said that “the developmental map of Egypt in the coming period will depend mainly on Sinai,” a statement by his campaign read.

Al-Sisi said the “state in the coming stage will not have any problems with regards to development in Sinai,” adding that there is a need for Sinai citizens to enjoy a stable life, security-wise and economically.

The first round of upcoming presidential elections will take place on 26 and 27 May, with Al-Sisi and Sabahy being the only two candidates, rendering no need for a second round of elections. Expatriates are scheduled to vote from 15 to 18 May.

In the 2012 presidential elections, Sabahy finished in third place and did not make it the second round of elections. Al-Sisi, who was appointed Minister of Defence by ousted president Mohamed Morsi in 2012, retired from the armed forces last March and announced he would compete in elections amid calls for him to run.