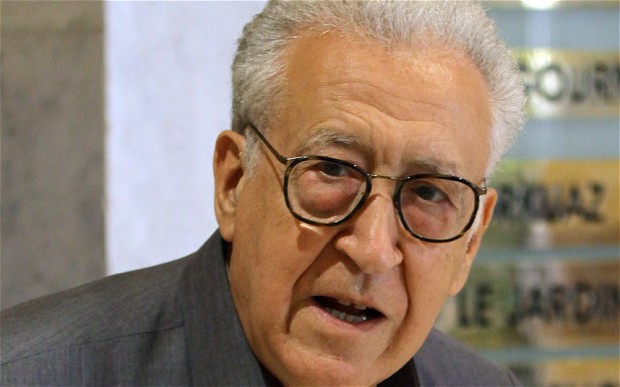 AFP – The resignation of the UN’s Syria envoy weeks before President Bashar al-Assad’s expected re-election has dealt a new blow to already dim hopes for a negotiated end to the war.

The international standoff was underlined Wednesday with Damascus reacting to Lakhdar Brahimi’s announcement that he will step down on May 31 by accusing him of bias and interference in domestic politics.

And with no sign of an end to more than three years of war that has killed 150,000 people and displaced nearly half the population, new suspicions have emerged thatSyria is using chemical weapons on its own people.

Brahimi, backed by the United States and Western allies, had coaxed Assad andSyria’s fractious opposition to attend peace talks in Geneva this year.

But negotiations broke down amid bitter recriminations after only two rounds, and the war has slipped into a fourth year.

Brahimi, who resigned Tuesday after nearly two years in the job, said he was “very sad that I leave this position and leave Syria behind in such a bad state.”

Asked what his message to Syrians would be, Brahimi said: “apologies, once more, that we have not been able to help them as much as they deserve; and, tell them the tragedy in their country shall be solved.”

UN chief Ban Ki-moon blamed the failure to find peace on “a Syrian nation, Middle Eastern region and wider international community that have been hopelessly divided in their approaches to ending the conflict.”

But Al-Watan, a daily newspaper close to the Assad regime, put the blame on Brahimi Wednesday.

“Brahimi is Saudi Arabia’s man,” it said, in reference to the wealthy Sunni kingdom’s backing for the Sunni-dominated uprising against Assad.

“He demonstrated his partiality for the opposition, particularly during the Geneva meeting by expressing his support for the National Coalition and its chief, Ahmad Jarba.”

State news agency SANA said there were numerous reasons for Brahimi’s failure, focusing on what it said was his interference in domestic affairs.

“A mediator cannot interfere in the sovereign affairs of states,” it said, without elaborating.

But British Foreign Secretary William Hague, who will host a meeting in London on Thursday of the pro-opposition Friends of Syria, blamed the regime.

Responsibility for the “collapse of… negotiations rests wholly with the regime’s refusal to engage in negotiations that addressed the issues at the heart of theSyrian conflict,” he said after Brahimi’s announcement.

Insisting that a negotiated solution is the only way forward, he said Assad and his backers “need to re-engage in the political process, and show they are serious about reaching a political settlement.

The Friends of Syria would talk Thursday “about how we can turn this dialogue into meaningful political process.”

But with Assad’s regime insisting on proceeding with the presidential election on June 3, prospects for a resumption of peace talks seem dim.

Torbjorn Soltvedt, analyst at British think-tank Maplecroft, said Assad’s bid for another term “has removed any pretence that the Syrian regime is engaging in meaningful talks with opposition over a potential transitional government.

“Assad’s focus remains firmly fixed on the battlefield, and on forcing a situation in which the Syrian government can dictate the terms of any settlement.”

Assad faces two other candidates in the country’s first multi-candidate presidential vote, but he is expected to easily win.

His challengers are little known, and have so far hewed the government’s line, deeming the conflict a war against “terrorism”.

“I’ve always admired his personality,” he said of the former president.

Maher al-Hajjar, the other candidate, told Syrian state television he was running “because of the terrorism that is targeting Syria,” saying “external Arab, regional and international forces were targeting the Syrian people.”

With diplomacy stalled, new allegations of chemical weapons use by Syria’s regime have emerged.

The Organisation for the Prohibition of Chemical Weapons watchdog, which is overseeing the removal of Syria’s toxic arms, has sent a mission into the war-torn country to investigate.