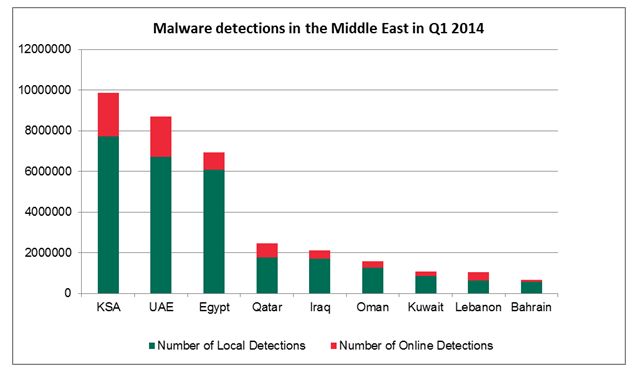 Egypt has landed the third position in the number of malware detections among the Middle East countries during the first quarter (Q1) of 2014, vendor of endpoint protection solutions Kaspersky Lab indicated in a report issued Tuesday.

“Altogether in the first quarter of 2014 in the Middle East, Kaspersky Lab products neutralised more than 34.9m cyber-attacks and malware infections on computers and mobile devices, representing an increase of almost 10% year-on-year [the 2013 figure was 31.6m],” Kaspersky Lab stated.

“More than 7m of these came from the internet, while the [remainder] were blocked when they came from local sources, such as USB drives, DVDs etc,” the firm said.

According to Kaspersky Lab, the security incidents in the Middle East represented 3% of the global level.

The IT security solutions firm said that Egypt recorded the highest level of local infections with 51.3%, adding that the online risks in the country were “moderate”, with only 24.3% of users affected.

“While mobile and financial malware, distributed denial of service, web threats and advanced persistent threats are becoming more popular among cybercriminals, removable media and local networks are still the primal sources of IT dangers for users in the Middle East,” Senior Security Researcher at Kaspersky Lab Ghareeb Saad said.

“Companies and home users should be aware of those risks” and protect their information by “using comprehensive solutions” Saad stated.

The Kingdom of Saudi Arabia placed first, having the highest total number of local and online malware detections. The safest countries were Bahrain and Lebanon, with the region’s lowest threat levels.