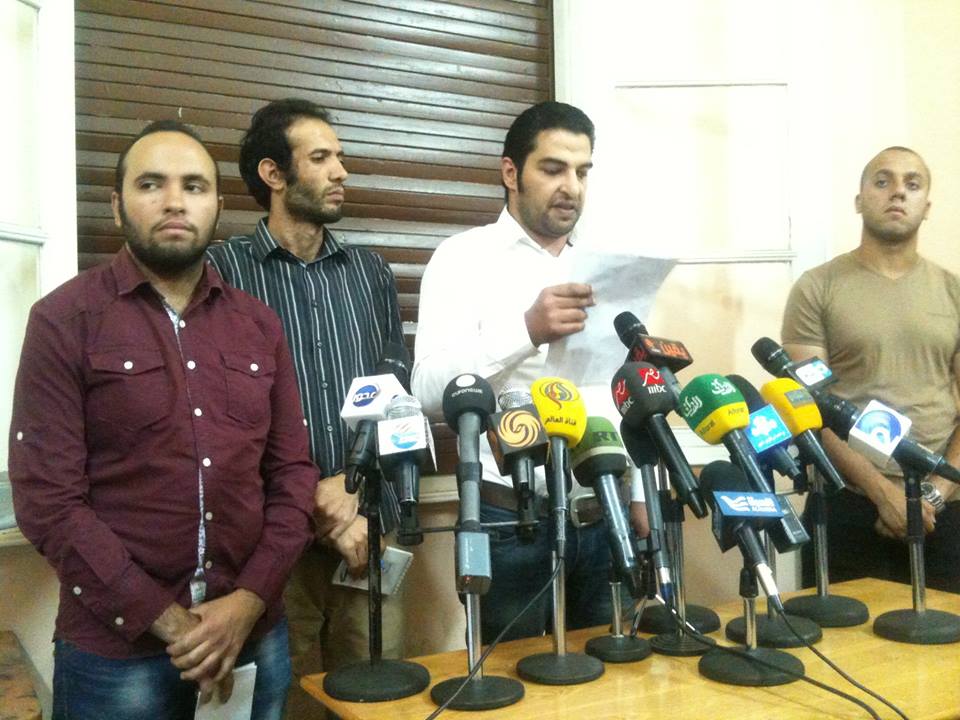 A number of revolutionary groups launched a campaign titled Deddak (Against You) on Saturday calling on Egyptians not to vote for former defense minister and presidential candidate Abdel Fattah Al-Sisi.

The call was made during in a press conference held in the headquarters of the Revolutionary Front, in which groups criticised Al-Sisi’s “sentimental media speech”, which they likened to the second speech made by former president Hosni Mubarak during the 25 January Revolution.

Al-Sisi, the groups said, has helped to create “terrorism” and “does not have anything to offer to the Egyptian people except austerity, corruption and a rifle aimed against his opposition”.

All “oppressive state institutions” are supporting the former defense minister, according to the revolutionary groups.

The campaign includes groups that have already announced their boycott of the elections and others that are backing the Nasserist candidate Hamdeen Sabahy. The Revolutionary Front, 6 April Youth Movement and Democratic Front, the Revolutionary Socialists, Hakemohom and Moqawma Student Movement are among the participating groups.

When asked about the differing stances on the forcible dispersal at the 14 August dispersal of protests at Rabaa Al-Adaweya between the revolutionaries and Sabahy, who does not consider the dispersal a massacre, Mohamadein said that certain groups chose to back the reformist politicians to defend the revolution from counter revolutionary forces.

He described the reformist liberal, nationalist and Muslim Brotherhood factions as “hesitant,” because they make political compromises.  “We call on Sabahy to reconsider his statements and call for the punishment of those responsible for the different massacres that took place,” said Mohamadein.

AbdelRahman Zaidan, representative of Moqawma Student Movement, said that while revolutionary groups may disagree with the cause behind the Rabaa sit-in, this does not mean that they agree with the “human rights violations” that took place during the sit-in dispersal.

Mohamed Youssef, 6 April Democratic Front spokesman, announced a series of protests to take place before the elections, and other protests after “Al-Sisi claims office.”

Youssef also rejected what he called the media’s portrayal of the revolutionaries as isolated from the public. “That cannot be further from the truth; our conflict is with the ruling authority, not with the people,” he said.

During the 2012 presidential elections a similar campaign was launched under the name Anti-Feloul, aimed against the remnants of Mubarak’s regime. The campaign called on voters not to vote for then presidential candidates Amr Moussa and Ahmed Shafiq, as they had both held executive positions in Mubarak’s regime.